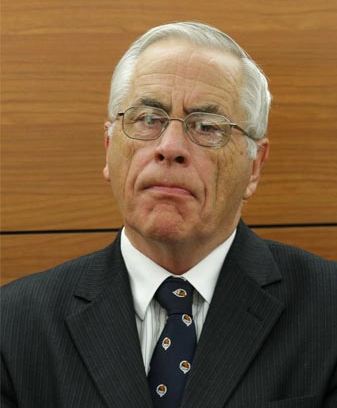 In the Dock: Sir Dodgey, Douglas Graham, the man who now wants to drop dead

Last week the Court in New Zealand handed down its verdict in the trial of four directors of the failed finance company Lombard Finance.

Late last year we posted a story on Dodgey Doug’s glorious past and his penchant for perverting justice, all very strange given that this suck-hole lectured in ethics at Auckland University. Although his tenure at the university could well explain the number of bent lawyers floating around Auckland and the capital Wellington.

Yet another political party suck-hole the not so Honorable Bill Jeffries, likewise a Minister of Justice, was also standing in the dock with Dodgey Doug when the GUILTY verdicts were handed down. We’ve always known that these pricks were bent, problem is, whilst in Government they abused the power of their positions and Parliamentary privilege to conceal their corrupt ways. In Much the same way as one of the National Parties current incumbents, Associate Minister for Justice, Nathan Guy, has done in the here and now; aided and abetted by an un-elected National Party stooge, Dr Jackie “I’ve been belted” Blue.

Graham  was found guilty of making false statements as a director of Lombard Finance, the company he’d earlier bailed from as soon as it was placed into the hands of a receiver. This was not the first time Douglas Graham had been guilty of making false statements, he’d cut his teeth on this practice whilst often misleading New Zealand’s Parliament and the press gallery whilst attempting to conceal a two billion dollar fraud on New Zealand consumers. Problem is that New Zealander’s can be slow to learn and the investors in Lombard turned a blind eye to Dodgey Dougs previous form. They still do, it seems that they have a blind spot when it comes to seeing the wood for the trees, or rather sorting the genuine politicians from the fraudsters and liars hiding in their Parliament.

In recent times there’s been quite a few of these suck-holes caught at it, both in politics and after departing Parliament. New Zealander’s have no real statutory protections against corruption and as a country are still very much occupying a 19th Century mentality, with the blind faith they, the citizens, place in those who hold power. Time to wake up New Zealand and start to hold every politician, civil servant and court official to account.

Amazingly, the question that appears to be on every New Zealander’s mind is should Sir Douglas Graham be stripped of his Knighthood, we would have thought the answer was bloody obvious, but then again we’re not New Zealander’s