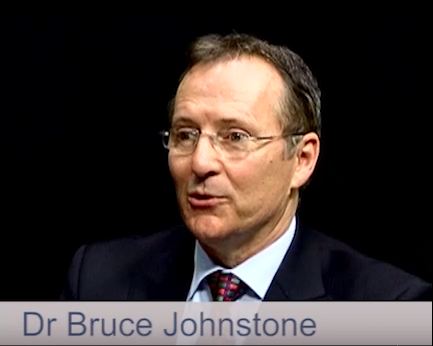 Note: Bruce is doing his best to prevent us bringing our readers this news story. He seems to be showing little respect for Australia’s fair dealing laws and the US fair use law

This morning we received a comment from Dr Bruce Johnstone

Bruce is a man who obviously enjoys re-inventing himself and apparently is always up for a challenge; although attempting  to re-write history is a big one, he may well be pushing shit up hill with that.

Looking at some of the on-line self serving material he himself has published; if Bruce is not suffering narcissistic personality disorder, he sure as hell displays many of the symptoms; as set out in the DSM IV:

(1) has a grandiose sense of self-importance (e.g., exaggerates achievements and talents, expects to be recognized as superior without commensurate achievements)

(2) is preoccupied with fantasies of unlimited success, power, brilliance, beauty, or ideal love

(3) believes that he or she is “special” and unique and can only be understood by, or should associate with, other special or high-status people (or institutions)

(5) has a sense of entitlement, i.e., unreasonable expectations of especially favorable treatment or automatic compliance with his or her expectations

(6) is interpersonally exploitative, i.e., takes advantage of others to achieve his or her own ends

(7) lacks empathy: is unwilling to recognize or identify with the feelings and needs of others

Just one example: Bruce, in a move consistent with the DSM IV criteria has even though himself important enough to have created his own Wikipedia entry; extolling his many virtues, talents and qualifications:

Although Wikipedia have sensibly placed the following caution on the haughty entry, theres nothing remotely neutral about the material:

A major contributor to this article appears to have a close connection with its subject. It may require cleanup to comply with Wikipedia’s content policies, particularly neutral point of view. Please discuss further on the talk page. (June 2010)

Bruce was writing in to comment on the post:  “Lewis Proctor – Bent Cop, Piss Head and Magnum P I”. It would seem that Bruce would have us all believe that he had not colluded with bent cops, Bruce writes:

In 1988 I owned and edited a feisty little local paper [The Eastland Sun] in Gisborne.
From time to time I may well have been unwittingly manipulated by people with their own agenda. It is an occupational hazard for journalists – especially inexperienced ones who are keen to break stories.
However I can tell you I never knowingly colluded with bent cops.
What exactly was I guilty of? Believing and trusting a police officer?
Now, 23 years later, you are implicating my wife and me in all this. And using current pictures of us. This is a little unfair and unfounded don’t you think? I notice you are preserving your own privacy with a pseudonym. Who exactly are you?

Unfortunately for Janet and yourself Bruce, we did not implicate you in anything , you both did that yourselves 23 years ago. The evidence proves that. We don’t  suppose you would have bothered commenting unless you had immediately recognised that fact and it’s many nasty implications; criminal conspiracy being one.

In his own statement Bruce appears to be making an admission; “I may well have been unwittingly manipulated by people with their own agenda”  and “What exactly was I guilty of ? Believing and trusting a police officer?”   Bruce certainly appears to be conveying his serious concern, having been confronted with the evidence. Bruce was manipulated, but not unwittingly, at all times Bruce and Janet knew what was happening, what they were doing and what role the corrupt cops expected them to play.

It was after-all, as Bruce rightly states, 23 years ago and no one could be expected to remember everything that happened on any given day after that period of  time; except perhaps, someone who had been the victim of corruption and gross injustice, no one ever forgets that in a hurry.

Thats why documents, tape recorded telephone conversations and official police records are fantastic reference material when writing stories that recount and expose the unsavoury  events of past corruption. These Stories need to be shared so as to, in a social context, shame the perpetrators of criminal malfeasance and forewarn other naive citizens of its very real existence in and around the New Zealand Police force and Government.

Bruce could not realistically be expected to remember the number of articles he had written, or their contents for that matter. Nor could he be expected to recall the contents of the many letters he had received from the individuals he had vilified or the fact that he had published one of those letters. We also seriously doubt that Bruce would want to remember the many cozy conversations he had enjoyed with two very corrupt cops, down at the offices of the Eastland Sun in his own deplorable and desperate efforts to avoid a court action for defamation.

No, Bruce is not the genius that he would have us all believe, he obviously does not have the gift of total recall. But then again who realistically would want to recall, let alone admit, the pivotal role they played in a criminal conspiracy (there is no statute of limitation for the prosecution of a crime). Obviously Janet,  Bruce’s wife, has also forgotten about the telephone call she received after the same police force had “fingered” her husband.

Perhaps the cops needed to destroy Bruce’s credibility also? Whatever their reason, Janet was telephoned by one of the brothers in the mid 1990’s and given the opportunity to fess up on what had really occurred, she however “did not want to go there” and then hung up.

We also note that Bruce failed to use the links to enlarge and read the corrupt cops (Detective Malcolm Thomas), own job sheet wherein Thomas states:

1000hrs: Advise Bruce JOHNSTONE – Editor of the Gisborne Sun (Eastland Sun) of the above to warn him of being “set-up” by the (brothers). (a nominated informant in the report). Had not (yet) been visited by Payton.

Perhaps Bruce had no real need, he was already aware of the contents and what he had said – remember he was there! Now we would say that is pretty clear, Bruce Johnstone’s motive was simple enough – at all costs, to avoid loosing millions in damages. Although, having said that, we suspect that Malcolm Thomas had pulled the figure of $27 million out of the air.

Then of course there is the complete absence of journalistic integrity. Johnstone did not contact the brothers, so as to obtain the other side of the story, as is the normal procedure for any journalist; balance is important. Johnstone was perhaps inexperienced but not stupid, after all, as he now likes to advertise, he had managed to complete a university degree.

Yet another fact;  Johnstone willingly wrote several follow up articles wherein he lied on behalf of the corrupt cops about the circumstances in which the search warrant for the telephone records had been issued, despite another national publication (The Sunday News), which Johnstone refers to in that particular follow up bullshit piece, presenting irrefutable evidence that the warrant for the telephone records had been fraudulently obtained by Thomas after the fact; A fact that Thomas’s own job sheet  now proves beyond any doubt.

LAUDA FINEM have copies of every article penned by Bruce Johnstone (including one very nasty editorial, based on the erroneous reporting of Jenni Mc anus of National Business Review fame) ironically supplied under FOI laws by N Z Police HQ. You see Bruce these bent cops, the psychopaths that you assisted had some very bizarre habits; one, similar in fact to that of a stalker or serial killer (you’ll perhaps remember Bruce what these same men did to Dickie Maxwell, with shot guns and barbed wire). They liked to collect trophies and Newspaper clippings were just the ticket; for their scrap books. Incidentally Bruce has also failed to listen to the tape recorded telephone conversations available on YouTube.

For a man who wants to now claim that he only wanted to break news stories, he wasn’t very observant; right under his nose at that same time was the scoop of the century. Bruce Johnstone like Radio New Zealand’s Rodger Handford also at the time failed to report the fact that the police he had conspired with had been stealing large quantities of fuel from the Gisborne police stations petrol bowser for their own personal use.

Sorry Bruce, but you really are on the nose, a scumbag of the worst order, totally devoid of values or common decency and certainly not someone we would consider fit to be educating children.

PS: There are many individuals here at Laudafinem Bruce, and unlike you naming rights is not something anyone of us lust after; but we can certainly understand your own personal “obsession” .  We would suggest that you start to have a look through your own archives at the absolute shit you penned 23 years ago. No doubt you’ll feel a cold shiver; as will the parents that have dealings with you now! Psst, say Gidday to Janet  for us all!

On the 26th May 2012 Lauda Finem was alerted to the fact that Bruce had, we believe falsely claimed copywrite over our image so as to have the identifying photograph of him removed from one of our posts. Given that we do not divulge our whistle-blowers identities and that includes those who supply material we were unable to respond to the DCMA request, which of course was just another example of Dr Bruce Johnstone cunning (As our evidence proves he’s been making false claims and allegations since 1988). We have however for some time had a reciprocal arrangement with the self hosted site “thefilthfiles.com” and, if required, are able to use their vast archival resource; as always it pays to be prepared.

Despite Dr Bruce having known about the images for many years (and of course we have emailed him) he only chose to act now, why? New Job perhaps?

We believe its because Bruce has left New Zealand for the United Kingdom, the new job and the fact that he is safely outside New Zealand’s criminal jurisdiction, but hey that,s just our opinion.

On the 15th January 2012 Lauda Finem was alerted to the fact that Bruce Johnstone’s Wikipedia entries had been removed but we had of course already screen grabbed them for posterity: 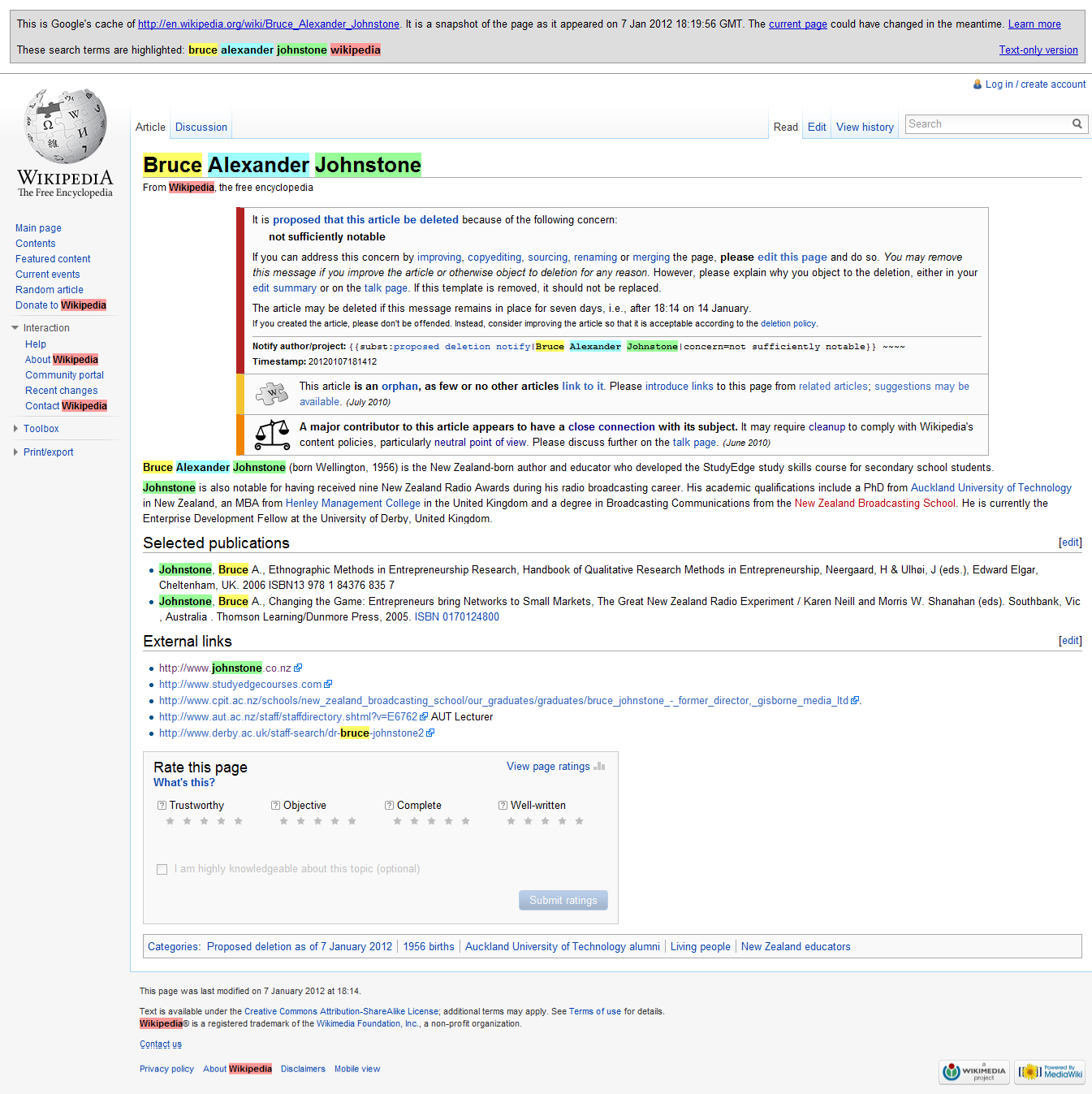 Johnstone B A (2008)  <p>Improving the Framework for Entrepreneurship and Innovation in New Zealand</p>.  XIX ISPIM Annual Conference, Tours, France15- 18 June  2008.

Johnstone B (2011) SME Projects: Measuring the Impact and Learning the Lessons.