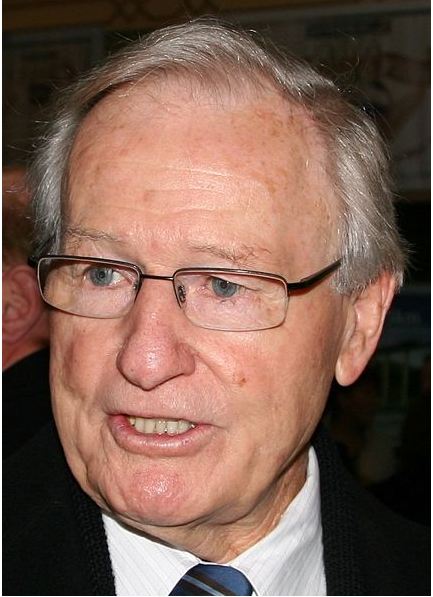 James “The Spud” Bolger an ex Prime Minister of New Zealand and the man at the helm of Trustees Executors limited (TEL) when that greedy company became the subject of the biggest mortgage fraud in New Zealands history.

Bolger nicknamed “Spud”, so called because of his plastercine facial features and Irish history was not the sharpest knife in the draw. He was caught putting on an Irish accent during a meeting with the Irish Prime Minister*. Spud of course couldn’t converse in Gaelic, in fact, he had real trouble with using the English language; with a somewhat noticeable speech impediment. There is one thing he could do however, on the long cold King Country nights, and that was to breed. Bolger was in fact a true Irish Catholic breeder, producing nine little “Spuds”. Bolger, also in true Irish Cathloic fashion, opposed any change to New Zealand’s abortion laws.

Spud was contemptuous of the New Zealand parliamentary system being pro republic and not adverse to lying and misleading the parliament for his own means or that of his associated “criminal” car dealer friends as part of a conspiracy to defeat the course of justice. I know, what’s new, a sad old politician lying to and deliberately misleading a whole bunch of unscrupulous Members of Parliament.

It was more serious however than just misleading the MP’s, as a conservative National Party politician he had lots of car dealer mates, most financial contributors to his National party. Spud Bolger wanted to prevent the collapse of the Motor Vehicle Dealers Institutes (MVDI) fidelity fund. Instead of acting to close down the criminal dealers he acted to discredit the source of information establishing and evidencing a huge “odometer Fraud scandal” in New Zealand

Spud Bolger also had a problem with the then NZ First minister for Customs Neil Kirton. Kirtons problem was he was naïve and was frequently found on the television news, hard hat on, dedicating himself to stamping out the criminal gangsters who controlled the international odometer syndicates.

Spud Bolger had to get the dirt on Kirton and he succeeded in uncovering irregularities in Kirtons business dealings, specifically to do with the employment of workers on Kirtons orchards. Kirton also had issues with another good old boy from down on the farm, Bill “the bully” English and accused him of being a liar….that was just to much  and Kirton was demoted within days and the tenacity with which the crackdown had been prosecuted  by Kirton as minister of Customs, became instead a National Party cover up.

As part of that cover up Customs in house legal counsel a Mr Singh advised consumers and complainants that the Nikki lists could not be used in the criminal prosecution of the dealers identified on them.  That advice was again wrong and like Spud’s Parliamentary attack was designed to stop the prosecution .

An application under Section 344a of the New Zealand Crimes Act was made in the private prosecution of a Car Dealer Andrew John Gummer to make the documents admissible in a trial.  Judge McElrea ruled them admissible. Gummer was finally indicted and convicted in 2005.

There was however a problem with the source of the documents proving the odometer fraud. Prime Minister Jim Bolger immediately decided that he had to discredit the source, so he attacked the credibility of the man responsible for exposing the odometer fraud. Bolger knew the lists which were to become known as the “Nikki Lists” had been recovered from the internal accounting records of Nikki International Corporation of Kawasaki Shi, Tokyo Japan.

Bolger knew the documents were genuine and accurate, his very own Serious fraud office had travelled to Japan and obtained statements from the Japanese dealers responsible. Who, faced with the auction records and their own company audit documents fessed up admitting that they had been instructed by New Zealand car Dealers to wind or flick the odometers on the vehicles purchased by them at auction in Japan.

Bolger “the Spud” was so desperate to shut the investigation down, that he as Prime Minister eventually ordered a go slow on the Serious Fraud Office (SFO) investigation. That “go slow” later becoming a serious question of concern by straight up members of the judiciary ruling on case’s before the courts. Specifically the subject of mention by District Court Judge (DCJ)  Frederick McIlrea during a call over in the private prosecution of Mr Andrew John Gummer.

Bolgers attempts to close it down were ultimately unsuccessful , Bolger was overthrown by Jenny Shipley as Prime Minister of New Zealand, whilst he was overseas.  Jenny continued the efforts of the National coalition to close it down. Frustrated with the National coalition governments efforts to close the odometer issue down the man the subject of the false accusations by Bolger took action.

He filed private prosecutions against the Prime Minister, Jenny Shipley, Minister of Justice Doug Graham and the head of the SFO for suppression of evidence under Section 71 of the Crimes Act 1962.  The Solicitor General Terence “Thunderbird”  Arnold (sorry, he’s got to be a puppet) intervened and stayed the prosecution of the National Party Government  ministers and ten days later eventually started to prosecute the Criminal Car dealers.

The dealer whose hand written notations were on some of the documentation sought to be discredited by James “the spud” Bolger, Mr Sunil Bansal was eventually indicted and fessed up and pleaded guilty, the summary of facts admitted to by Sunil Bansal in turn completely discredited Bolger himself and his criminal actions as Prime Minister. Sunil Bansil was a serial corporate fraudster and later involved in yet another fraud involving petrol giant Mobil Oil.

The National party and their mates had been caught out yet again. Bolger had received the dodgey information from his mates in the, now defunct, Motor Vehicle Dealers Institute (MVDI). How do we know? Well because some of the information was materially incorrect. The information most likely illegally passed on through the hands of Izard Western Barristers and solicitors of Wellington,  legal counsel, not only for the MVDI, but also for Fairfax and various other Media flunkies.

As an aside, Jimmy “the Spud” Bolger was also subsequently responsible for New Zealand’s Building Act 1991 which resulted in the multi billion dollar leaky home’s debacle.  The “Building Act” heavily promoted by the National parties mates at Carter Holt Harvey lead to the introduction of untreated timber and construction of houses from their Ticki tacki plastered Villaboard. It was a shambles a multi billion dollar shambles that to this day is still being challenged in the countries courts and has cost New Zealander’s Millions in litigation and repair bills.

Bolger not satisfied with these debacles went on to head up a company caught in the biggest mortgage fraud in New Zealands history, as Chairman of Trustee Executors limited (TEL). Even stranger the man, the subject of the attack in parliament by spud, was the one responsible for outing the mortgage fraudster Malcom Mayer and then sold down the mortgagee properties the subject of the frauds. Truth is stranger then fiction for dodgey old Jimmy “the spud” Bolger from the Naki. 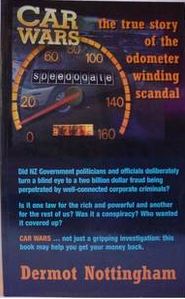 Car Wars: The True Story of the Odometer Winding Scandal

#Dermot Nottingham: Car Wars: the true story of the Odometer Winding Scandal, published by Howling at the Moon

Some documents soon to be published