As this blogs regular readers know we have for the last four weeks been investigating www.accforum.org the members, its administrator and co-founder the young whizz-bang Aaron Wislang and a plot to falsely accuse innocent men such as Alan Thomas. We have now decided to profile some of the nastiest inhabitants of this online menace.

We thought we’d start by introducing Franciscus Van Helmond a man who uses many on-line guises including monikers such as  “Blurb” (very much the Ladies Man) and “RedFox” a character that lives on the edge of a sewer and open dairy farm sewer in Cambridge, Waikato, New Zealand and his brother Henk: “Cyber bully gets given his beans”

Fran, as he likes to be called by the boy’s (continental mystique) is obviously a New Zealander of Dutch extraction. He’s also a nasty piece of work who, it appears, genuinely believed had at least half a chance of winning a seat in the local body elections of 2001. Fran who is, incidentally, a complete no-body was running for the office of Mayor in New Zealand’s largest metropolis, Auckland; not that there’s anything wrong with that aspiration as such.

We are however left wondering which section of the electorate it was that Fran thought he might appeal too, with a face like a badly shaved dogs arse, we’ve certainly got no idea?

Nevertheless despite the obvious visual impediments, Fran’s extraordinary belief in his innate ability gives us an insight into the politically astute mind that drives the man. The words nutter, delusional, bitter and twisted readily come to mind when looking at this political wannabe’s history. Fran also has the gift of the gab, an obvious advantage for any aspiring politician. We have captured just a few of his more eloquent moments on the ACCforum;

“Can’t get any clearer than that. If you’re ACC or connected with them, or a government agency then fuck off. If you’re not any of those wankers then …..”

Fran’s right, it doesn’t get any clearer than that. His mastery of the art of communication unquestionably borders on pure genius when it comes to the much needed skills of “winning friends and influencing people”. He had a post up the other day on accforum that was even more succinct, the administrator however, obviously concerned about the serious cracks appearing in the forums foundations, had the peice pulled pretty much straight away.

Fran’s business acumen is, in his own mind at least, right up there with that of Howard Hughes. That became apparent in 1999, reading between the lines, and looking at the photos, Fran must be a bit of a weed/piss-head. Anyway, expanding on reports in the papers, one night Fran’s propping up the bar at his local watering hole when this fat dude in a suit walks in and asks if anyone had experience in dealing with gas. That’s where it all started and, unfortunately for Fran, ended. Nothing in writing mind, just some fat bloke in a suit promising the earth during a piss-up at the local pub. Fran, forever the optimist must have thought he was onto a winner, so off to the bank to get a massive loan for the Tonka toys the fat bloke with gas problem had told him he’d need.

Apparently, looking at his YouTube channel Frans as happy as a pig in shit, but only when he’s the one slinging it, a week later the bloke with the gas problems had shot through and poor old Fran was left up shit creek with no way of digging himself out, the repo men had already popped around while he was out and nicked the industrial sized toy’s 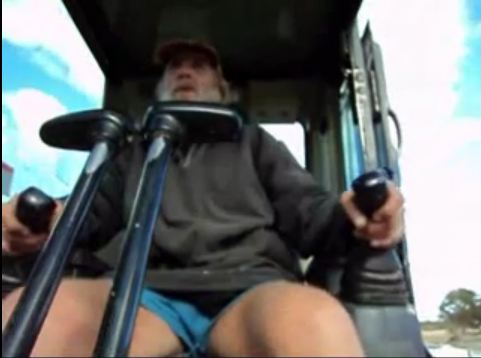 The so called invalid Henk Van Helmond slings shit for his little brother; click image oh dear Fran’s taken the video’s down, but we grabbed them all for evidence (smile Fran and Henk, oh and thank Miller and Weal for us)