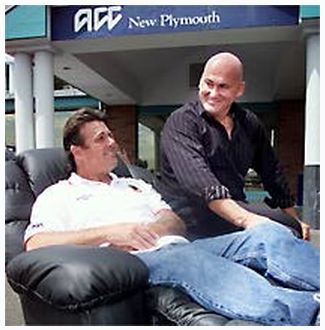 A disabled Taranaki man is sitting pretty following a landmark decision against Accident Compensation Corporation (ACC) over of all things a chair.

Philip Bonner, who has a permanently dislocated hip, has won a fight against ACC over the corporation’s refusal to provide him with a $4000 La-Z-Boy Mirage chair.

ACC said the chair was not of a type normally provided by a rehabilitation provider. But New Plymouth’s Mr Bonner supported by high-profile Auckland-based justice crusader Dermot Nottingham disagreed.

The case went before ACC reviewer Clinton Light, who has now quashed ACC’s decision and directed the corporation to provide Mr Bonner with the chair.

Yesterday, a defiant Mr Bonner celebrated his victory by sitting in his chair outside ACC’s New Plymouth offices.

“It’s a lovely chair it’s even got a massage unit in it. But I’d much rather have a better back,” he said.

And Mr Nottingham went on the offensive. “Clearly, a precedent has now been set which will enable hundreds, if not thousands, of claimants to be able to reclaim or claim for rehabilitation aids that will enable them to lead more able lives,” he said.

Mr Nottingham savaged ACC which he described as a multi-billion dollar bully for attempting to renege on an agreement to supply Mr Bonner with a chair suitable for pain relief.

“Mr Bonner’s family is distraught at the lack of empathy and assistance from the corporation and are literally ill as a result of the stress.”

Mr Bonner suffered a fracture dislocation of his right hip in a motor accident in 1985, and he then sustained further nerve damage to his leg as a consequence of medical misadventure.

He now suffers pain in his back, shoulders, and in his right leg and heel.

In his decision, Mr Light said ACC and Mr Bonner agreed in late 2002 that an assessor would be engaged to examine a request by Mr Bonner for a therapeutic chair.

This assessment was carried out in August last year by an occupational therapist, who noted that Mr Bonner’s current chair had deteriorated beyond repair because of his need to frequently reposition himself in the chair for symptomatic relief.

The assessment noted that a number of new chairs were tried out at a commercial furniture store, and that the Mirage model in the La-Z-Boy range was found to be suitable.

In a letter to ACC in December, the occupational therapist said that the chair that best met Mr Bonner’s injury-related needs was the recliner style of chair normally available from commercial furniture stores.

But in its submissions to Mr Light, the corporation argued that the La-Z-Boy Mirage chair was not of a type normally provided by a rehabilitation provider, because the chair could be obtained from a furniture store.

Mr Light said in his decision that this argument was wrong.

“It is possible that an item may also be available from a non-rehabilitation provider such as a furniture store,” he said.

Information he had received confirmed that at least two official rehabilitation providers could provide La-Z-Boy Mirage chairs from their range of rehabilitation chairs.

Whilst the article above no longer appears online a toned down version does. It however no longer includes a complete all important paragraph (below), attributed to justice campaigner Mr Dermot Nottingham. We expect the original version to again reappear online soon. The current online Fairfax Media version attempts to conceal the tone of Nottingham’s criticism of ACC’s corrupt behaviour, and the effect it was having on claimants lives: In the lazy-boy case the manager responsible was Janet Tinson:

“And Mr Nottingham went on the offensive. “Clearly, a precedent has now been set which will enable hundreds, if not thousands, of claimants to be able to reclaim or claim for rehabilitation aids that will enable them to lead more able lives,” he said.”

“Mr Nottingham said a precedent had been set and hundreds, possibly thousands, of claimants might be able to reclaim or claim for rehabilitation aids.”

Despite Fairfax’s less than subtle rewriting of the article, misquoting Nottingham, his 2004 criticisms have subsequently been upheld with what has now occurred in the Bronwyn Pullar case and many others. The question however still needs to be asked, who at Fairfax ordered the rewrite and why?

Following ACC’s loss with the lazy-boy decision they then attempted to stop Nottingham representing the victims of ACC’s “long-term claimant”  hit squads, but failed (Nottingham continues to act for ACC claimants who have been fucked over by the corporation).

Then in February 2006 a program appeared on TVNZ’s Fair-go which again made false allegations against Nottingham, allegations that Fairfax media would again repeat in 2009, resulting in an out of court defamation settlement, retraction and public apology.

Following this television show a letter designed to further damage Nottingham, again written by an ACC staffer, Simon Calvert, and addressed to TVNZ (which TVNZ  had refused to air or release) appeared online at www.accforum.org (released to forum member David Butler [aka “hardwired”] under false pretense by none other than ACC management).

The letter’s contents are, in our view, highly defamatory and clearly by design a covert act of aggression. Lauda Finem have now obtained evidence of ACC’s actions and by inference, the falsehoods committed to writing, its intentions:

The letter dated 19 January 2006, that now appears on www.accforum.org, purports that Nottingham was removed as an advocate in May 2004,  importantly just 2 months after ACC had lost a whole raft of cases as a result of Nottingham’ s more than obvious advocacy skills, including the above Lazy-boy case.

ACC decided not to work with him in the interests of the safety of staff and claimants, and the need to assist claimants to move through rehabilitation to independence.

We here at Lauda Finem think that ACC, Ms Janet Tinson, Simon Calvert and the operators of www.accforum.org might just be up to their necks in shit.

That aside our research evidences that Nottingham is still hard at work at the coalface of advocacy, having given ACC yet another hiding in the district court for its outrageous behaviour, on behalf of one of his clients, that story coming soon