The New Zealand Herald’s pompous media whore, Rachel Glucina, (that should read Glaucoma because this tart is obviously blind) has been busy, she’s written a little ditty on Dotcoms purported posting of a “RAPE” joke on twitter, but she failed to offer up the evidence, whilst claiming that the “tweeted” joke had backfired on Dotcom.

We have highlighted (and hyper-linked) some of Glucina’s less than ‘objective’ language in producing this peice on Dotcom’s purported RAPE joke: 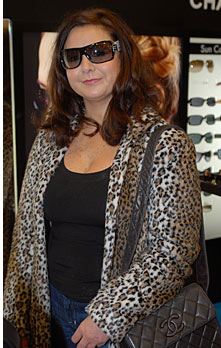 Journalist or just another “chortling” creature with some  “stomach” issues of her own. The fat faker and Chanel toting faux leopard skin”National party” media whore: Rachael Glucina

Is Kim Dotcom’s self-serving role as internet freedom fighter growing tired? The German multi-millionaire, who was arrested on criminal copyright violations and is fighting extradition to the US, was hailed as the hero du jour.

But Dotcom, who uses Twitter to foster his cause and a fledgling pop career, drew the ire of many on the social media site on Saturday after posting a wildly inappropriate joke about RAPE.

The author of the well-read (well read by who exactly Rachael?) Keeping Stock blog, who prefers his anonymity, said Dotcom’s sense of humour missed the mark. “As he tries to portray himself as a poor man’s Julian Assange, we’re starting to believe that Mr Dotcom may not be the jolly German giant media darling that folk such as John Campbell have fawned over for months”. The joke has since been removed, but others remain (which others Rachael?). “The human race has one really effective weapon, and that is my stomach,” the German chortled.

TVNZ reporter Heather du Plessis-Allan discovered on Sunday the gag didn’t get many laughs among her Twitter followers. “Wow. A full 30 people unfollowed me after I retweeted Kim Dotcom. Not much love for the man out there?” Perhaps there’d be more Aroha for Dotcom if he found other topics to opine about other than himself. Source: The Diary (New Zealand Herald)

Rachael’s the only one that missed the point! Her use of uncommon words and cock sucking expressions such as “Hero du jour” (amongst others) in the article may give the reader some insight into Glucina’s psyche, the mind responsible for yet another pretentious piece of low rent shite from the New Zealand Herald. Shit that has clearly been designed and written to damage Dotcom by misrepresenting fact.

This particular Australian own Kiwi shite sheet really is transforming itself into a gutter tabloid, in more ways than one.

Given that Rachael failed to provide her readers with the so-called “RAPE” joke we went looking; incidentally it wasn’t at all hard to find.

What we discovered however looked nothing like a purportedly offensive “RAPE” joke. It seemed to us that it was an attempt at political satire. Satire that played on the arguably false rape allegations that yet another vilified internet villain, Julian Assange, faces. Allegations which, according to some, just like Dotcom’s are coincidentally also at the behest of a recalcitrant White House administration and their FBI:

Is Rachael being a tad insincere, a little over sensitive perhaps or is she just blatantly using her position to play wing on the National Party’s team?

For the terminally thick; John = John Key, New Zealand’s Prime Minister and of course Hilary = Hilary Clinton = “Madam President”, the US Secretary of State who desperately wanted to be “President”. Dotcom’s tweet is clearly playing on the arguably false allegations against Julian Assange.

Interestingly Glucina does not provide any evidence of the so-called backlash on twitter, instead she cites another Government Toady with a hyphenated name;  The State owned TVNZ’s Heather du Plessis-Allan with her comments:

“Wow. A full 30 people unfollowed me after I retweeted Kim Dotcom. Not much love for the man out there?”

We’d like to point out that it was Heather du Plessis-Allan’s followers that did the “unfollowing”, perhaps the “context” in which she re-tweeted Dotcom’s work caused 30 Dotcom supporters to abandon her?

It appears that this blog, “keeping Stock“, also leans towards support for the National Party and John Key. The people behind the blog, yes there is more than one contributor which Glucina has missed, also list National Party stalwart Cameron Slater’s ‘Whale oil’ ,amongst other politically motivated sites, in their blog roll.

Finally, Ms Glucina appears to have missed the fact that one of “Keeping Stock’s” own readers was more than able to understand the “context” in which Dotcom had tweeted. Depending on ones sense of humour the tweet may have been seen as lame but it was by no stretch of the imagination a “RAPE” joke:

We think that Glucina was the one stretching the readers imagination and with it her own credibility! What the Herald should be focusing on is real news, with accurate and objective reporting, lest it fall into the trap of being seen as nothing more than another National Party shit-sling.

Glucina’s “RAPE” story has a lot in common with  Aesop’s Fable; The boy that cried Wolf…….there is a lesson in that particular tale. A lesson that at least one group of anti rape campaigners have picked up on:

“For decades we have campaigned to get rapists caught, charged and convicted. But the pursuit of Assange is political”

Of course the Dotcom case has also become very political, so just what was Rachael Glucina’s agenda? It can’t have been about advancing her sisterhood’s anti-rape cause; by printing this sort of government sponsored politically motivated Anti Dotcom crap, not so cleverly disguised as politically correct outrage, she’s achieved the exact opposite!

Rape is no laughing matter, but then again neither is conspiracy to falsely accuse and surely that was the real issue behind Dotcom’s tweet with what he believed was humorous…just like “Anonymous” above we too understood Mr Kim Dotcom’s point of view.

What’s more than obvious, however,  in Ms Glucina’s “message in newsprint” is the fact that Dotcom’s internet campaign is very much beginning to bite and it’s clearly hurting New Zealand’s National Party……hence the complicit media’s employment of hyperbole, spin and the age old technique of “shaming” the target with the use of a social taboo‘ so as to, divide the stake-holders and, shut down the political debate amongst the peasants……….please people cop on to yourselves!