Christchurch, New Zealand; A City Possessed and the travesty that simply refuses to die

Continuing on with the “CCC” gang, Corrupt Christchurch Cops theme, Lauda Finem will soon be taking a look at another couple of dirty little Christchurch abuse of process cases; the Peter Ellis and Gwaze injustices.

In the case of  Peter Ellis and the Christchurch Civic Creche, its an injustice that simply refuses to be buried and we believe for very good reason.

Its yet another Christchurch Police investigation and trial that tragically fucked an innocent New Zealanders life. Whats more this case unlike so many other New Zealand cases of note, such as Arthur Alan Thomas, David Brian Dougherty and David Cullen Bain, seems to have an added (and unwanted) political dimension; with politicians from both sides of the spectrum doing their utmost to ensure that Peter Ellis remains a convicted man.

Notably two of these politicians appear to be South Islanders, the likes of, Lianne Dalziel, Nick Smith, the exceptions being John Banks and Phil Goff three of which have since been embroiled in dishonesty, lies and corruption scandals: Banks with the ‘Dotcom‘ affair, Smith with the ‘Bronwyn Pullar – Accident Compensation‘ debacle and Dalziel (a little earlier) with her ‘lie in unison’ attempt. 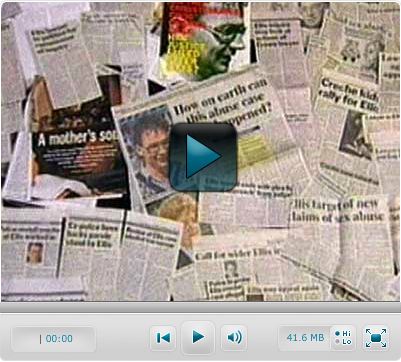 Looking beyond the ballsed up police investigation and the fucked up trial, there has always been something very fishy about the way successive Governments, the Justice Ministers and Attorney Generals have handled the Ellis case.

In fact given the overwhelming public sentiment and support for Ellis one could argue that had it been any country other than New Zealand the incumbent party Governing would have been taking a huge risk at the ballot box. But being New Zealand those in power, as always, banked on the political apathy of New Zealander’s an apathy they’re well known for… somewhat strangely most Kiwis appear quite happy to watch their fellow citizens being shafted, so long as it doesn’t happen to anyone they know or care about.

When it came to Peter Ellis Cops, politicians and the other stakeholders repeatedly threw about the label “pervert” and relied on it to whip up a homophobic storm resulting in the complete demonisation and vilification of Ellis and any supporters he had.

This type of vile reprehensible spin had in fact, perhaps unwittingly, played a major part in ensuring that he was wrongly convicted in the first place and the country’s mainstream Media is guilty of having played a major role in it all.

But to continue with it as Banks and certain others did, a decade later, when Ellis and his legal team (with overwhelming public support), were pushing to have his named cleared, well frankly that defies political commonsense. Its a behaviour that just doesn’t add up; unless of course one factors in the possibility that there had been other powerful stakeholders with interests and agenda’s of their own in judicial mix….which, readers, is not that uncommon in New Zealand; a remarkably small group of people have held far to much power for far to long, and they’ve all been intent on selfishly protecting their thrones.

In cases of wrongful conviction in New Zealand there are always dangerous undercurrents hidden from sight. People and events that are concealed and protected from the public’s steely glare. We believe that in the Peter Ellis miscarriage of justice case, perhaps more than any of its contemporaries, this “protection racket” may be behind Mr Ellis’s inability to obtain justice. Post trial and Ellis’s release from prison (starting with the ‘Eichelbaum Report‘) the events, the officials attitudes, the politicking and the governments actions have never quite stacked up (at least in the minds of the intelligent Kiwi’s we’ve spoken with); the question is why? 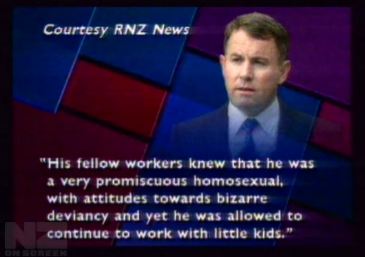 The corrupt and homophobic John Banks publicly vilified Peter Ellis. Mr Banks would be serving prison time had he pulled the same stunt here in Australia. View the Queer Nation Documentary (above right)

Here at Lauda Finem there are many questions surrounding the Ellis case that rankle us all so we thought we’d take a closer look at the stakeholders. Especially the players behind the scenes; the politicians, crown prosecutors and of course the Christchurch cops. There’s also the bevy of  ‘unknowns’ who played a role in having Ellis falsely charged and convicted and whats more important they’re still at it. As always, just as in the Dotcom case, using smoke and mirrors to ensure that Peter Hugh McGregor Ellis, an innocent man,  remains falsely convicted, vilified and uncompensated.

We’d like to hear from anyone that has information on this case or any other case that readers feel would be of interest to New Zealander’s and our many international readers, simply email us at: laudafinem@bigpond.com

Ever since its founding by Edward Gibbon Wakefield and the Canterbury Association the colonial City of Christchurch has been an incestuous little shit-hole and at its centre local police and crown law solicitors and barristers carry on the  judicially sordid tradition of corruption.

mtrbiker — April 15, 2009 — This slide show outlines some of the political connections in the unbelievable Peter Ellis/Civic Creche child abuse case and is dedicated to Greg Dowle of Waitara, Taranaki, New Zealand, and his aliases of Mr. Scooter and plain old Scooter. Mr. Scooter’s recent rant in Usenet’s nz.general group singing the praises of Joy Bander and her crazy fabrication, “A Mother’s Story”, provides an opportunity to highlight the shady political connections to Joy Bander and her fellow conspirators in the doubtful investigation and conviction Peter Ellis. Mr. Scooter is a rabid and ill informed critic of anyone who doubts the safety of the criminal convictions of Peter Hugh McGregor Ellis.

This slideshow features a New Zealand Radiolive host, Michael Laws, responding to an email received in the course of his nine to noon radio talkback show on 16 December 2008. Michael Laws reads what he was supposedly sent. It is a startling partial expose of some notable NZ parliamentarians who are intimately connected to the complainant side of the Peter Ellis prosecution.

It is possible some of the content broadcasted breaches New Zealand High Court name suppression orders. If so, it would be a great pity as the existence of possible political connection and involvement in the prosecution of Ellis and his fellow workmates is the subject of considerable rumour. Suppression would serve to prevent the New Zealand public from ever being alerted to the possible political influence at play behind the scenes.

Maybe the Government could clarify and assure the New Zealand public that there wasn’t political influence anywhere along the Ellis investigation, prosecution, and subsequent appeal processes.

Below are two comments we discovered on the New Zealand Labour Party’s “Red Alert” Website that relate to the radio excerpt above:

Note: all Urls (with the exception of those dated otherwise) were sourced 19.10.2012