Bigotry: New Zealand leads the pack, fresh off the boat and they’re in on the act!

Spot the difference above? Any reasonable person would agree; there isn’t one!

60 years ago it was white American’s who considered the “black” races as “Animals” now in 21st Century New Zealand it seems its quite okay to be applying that very same vile discriminatory term to the county’s gay men and women.

What’s more the idiots throwing this shit around aren’t even genuine Kiwi’s and they’ve been doing it with complete impunity.  But, of course, God help anyone who might have used the equally vile “N” word in retaliation  New Zealand has always fallen well short of actually having any effective legislation that controls all such behaviour. Here in Australia these two idiots (above) would have, and rightly so, been charged and awaiting their next court call over:

Perhaps that’s why tens of thousands of hard working educated, dinky-die, New Zealander’s are heading to Australia for good.

Whatever happened to one law for all? When it comes to discrimination; we suspect, only when its convenient! We also suspect that this new anti-discrimination policy, (the only when convenient policy)  may also now apply to the doctrine of the separation of Church and State. At least that’s according to immigrant National Party rogue MP Kanwaljit Singh Bakshi, an Indian National (who managed to wangle a Kiwi passport), who believes that you do whatever it takes in the pursuit of political power. That obviously now includes shitting on your 7th generation gay Kiwi’s hosts with vile placards; he must have learnt that little trick at the feet of corrupt Indian politicians in his native country……..this prick Bakshi needs to be taught a lesson; there’s a lot more to being Australasian than holding a Kiwi passport.

Bakshi is not alone with his difficultly in understanding legal concepts and doctrines, his fellow National Party pollie, John Key, has been having a lot of difficulty of late understanding the meaning of the “separation of powers“ doctrine. 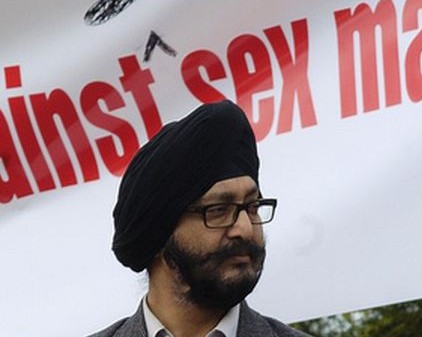 Kipling character? A nobody who would be King Singh; the corrupt National Party MP Kanwaljit Singh Bakshi. ‘baksheesh, baba!’

Bakshi and his Émigré insurgents (above and right) also appear to be having a little difficulty understanding the English language; what with its many complex terms such as bigotry, discrimination, equal rights and vilification. Or is it simply a case of, they only apply to non whites and only when the egregious behaviour is directed at Indians, Samoans, Tongans and or any other racial minority Bakshi deems likely to keep him and his corrupt National Party in power.

It’s quite understandable that Mr Bakshi’s constituents elected him, looking at the placards they seem to be a little thick; not even capable of stringing a sentence together. Its strange, however, that Bakshi is standing up for the “Christian” right and its belief’s, given that he’s about as Christian as Osama Bin Laden’s little finger.

But then again, being from the Sub-Continent (Delhi) he’d be used to whipping up religious fervor and hatred so as to achieve his own agenda (its a cultural thing). It was in fact someone just like Mr Bakshi who caused, by politically/culturally motivated religious hatred, Mahatma Gandhi’s death by assassination in 1947.

We here at Lauda Finem had reckoned on New Zealand being only ten years behind Australia, but apparently not. It must have something to do with the country’s emigration policy; driving educated New Zealander’s out. Then importing complete and utter fuckwit‘s who after a couple of years turn their hand to botching medical procedures or, like Bakshi, corruptly running the country. Interestingly Bakshi’s religious leaning appears to have a lot in common with that of Abu Hamza al-Masri , recently deported by British authorities for his dangerous beliefs.

Perhaps New Zealander’s might like to consider deporting Mr Kanwaljit Singh Bakshi or at the very least ensuring that he is driven out of Parliament, after all New Zealand’s in enough shit as it is with out allowing a bigoted homophobic twat to hold any real power:

The first Sikh MP and with any luck (given the way Bakshi’s been behaving) the last!

It’s also a lesson in what happens (electorally) when you allow economically deprived racial ghetto’s to form; wealthy pollies, devoid of conscience, feed of them….. with of course the, feigned, deep understanding of their religious sensibilities and cultural values; and when that inevitably fails; there’s always welfare handouts.

We here at Lauda Finem subscribe to the truth and thus this little idiom, we feel, may well explain the above post:

“Political correctness is a poor substitute for critical thinking”

Simply put; absolutely everyone deserves a fair go, and of course they all need to be left to “live and let live”, that dear readers is the secret to ending wars.

The Government does not appear to be concerned about the reopening of an inquiry into one of its MPs.

The inquiry, involving list MP Kanwaljit Singh Bakshi over immigration allegations, is back on after police were provided with fresh information.

There have also been allegations swirling around about attempts to silence witnesses.

“As far as I understand, he’s quite clear he hasn’t done anything he shouldn’t have done,” Acting Prime Minister Bill English told reporters today.

“There have been allegations around for a while, it’s my understanding that the Department of Immigration has been looking into those and they should follow the proper processes.”

Immigration New Zealand started an inquiry last year but closed it in March because of a lack of evidence.

It has now provided police with further information on the allegations after interviewing a new informant, The New Zealand Herald reported.

The service also provided police with a sworn statement, obtained by Labour MP Pete Hodgson from another new informant, which said complainants were encouraged by people in India to drop the matter; “because he was going to be the first Sikh MP in New Zealand”.

Police said they were looking at the role of former immigration consultant Darshan Singh Bains, who took job offers from Mr Bakshi and gave them to Indians to use as part of their applications to migrate to New Zealand.

Mr Bakshi said he knew nothing about the police investigation, and had not had any contact with Immigration since its file was closed.

Mr Bakshi has been away from work after a heart bypass operation but is expected back soon.

In Parliament today Mr Hodgson read an affidavit sworn by Darshan Singh Saran, a resident of the Punjab and a friend of Kuldip Singh, the man who says he paid for a job offer for his wife.

The affidavit said the money was paid to Darshan Singh Bains, and Kuldip Singh’s attempts to recover it failed because the immigration consultant had disappeared.

It recorded how “influential people” urged Kuldip Singh not to speak out against the MP.