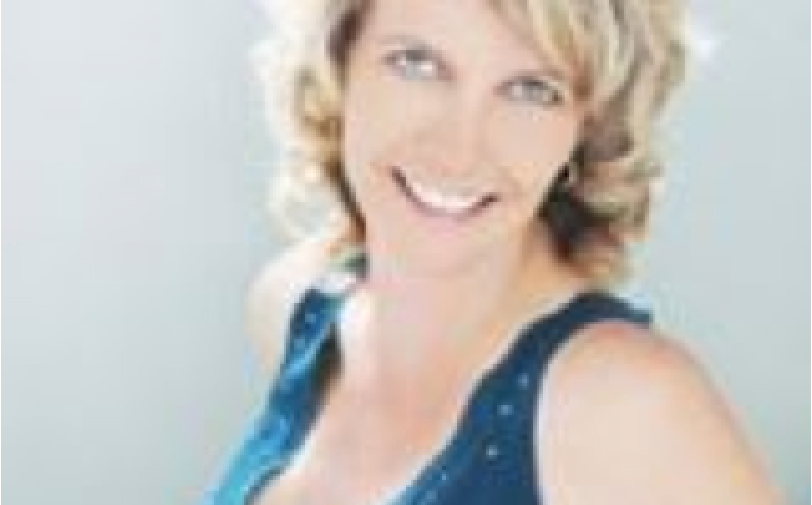 The Liz Curry Affair: A story of massive corruption that reaches to the very top of the elite polo brigade & the cops……coming soon

This story of extraordinary corruption involves the New Zealand police force, a junior officer by the name of Constable Adam Zandbergen, his mother Anne-marie Vanderbeck (an employee of Ewen Equine Services), polo pony owner (and Liz Curries fuck Buddy now and at the time of the false allegations against Mr Crann,) Mr Clyde McLean.

Its an amazing story and the plotting continues despite the “Not Guilty” verdict of a KIWI jury. Of course there are secondary parties that are apparently only now willing to line up to assist in the fight to avoid a prison term for Liz Curry, the false complainant (or perhaps even themselves) – Men and women such as  Mr and Mrs Ewen (Ewen Equine services owners [Dr James and Pepe Ewen of New Zealand]) and Constable Zandbergen’s mother Anne- Marie Vanderbeek, the Ewans employee. As and aside the names Zandbergen and Vanderbeek sound almost Afrikaans, as does  the name of the fucking SA born judge “Gus Adolph Andree Wilten”.

We’ll leave readers with a collage of screen grabs of those LF believed were likely involved (after considerable investigation) which the LF team had managed to grab before those involved in the cabal went to ground – following our first post in this epic police corruption story: – apparently this thoroughly rotten “Kiwi” horse trader story could well spread across the globe –  Dubai and beyond:

“The firm’s clients are now spread variously across the globe. Currently we are handling matters for clients located amongst other places in Dubai, Sydney and London” 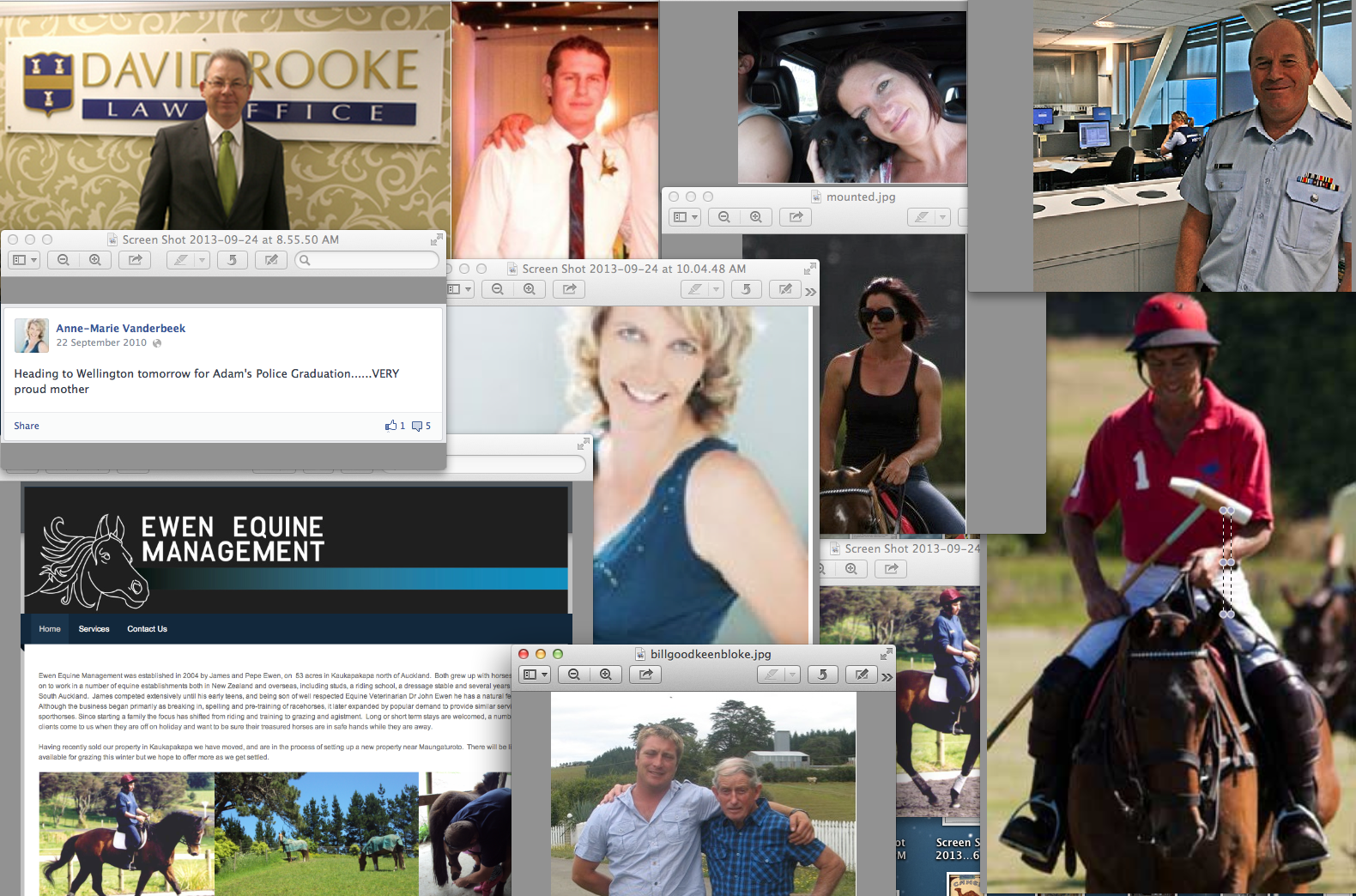 Within a matter of hours of the above post being published constable plod, Adam Zandbergen (and perhaps his NZ Police HQ minders), moved to erase Zandenbergs forensically available web “hoof-prints” and the very interesting personal associations he has in common with Liz Curry and her horsey mates. Unfortunately for this particular bent cop we had already been into his Facebook page weeks ago (as part of our investigation) and grabbed the  material we thought germane (thats absolutely everything) – evidence that connected him to Clyde McLean, Elizabeth Curry,  and her numerous horse world associates well before the conspiracy to falsely accuse Crann had been set in motion. That then begs an obvious question – what on earth prompted Adam Zandbergen’s sudden decision to remove his Facebook page and the links to his mothers (Anne-Marie Vanderbeck) within hours of the above post? It probably won’t surprise readers that we expected Zandbergen to attempt to rewrite history so to speak. Here at LF we’re pretty sure we have the answer and its yet another indictment on the New Zealand Police force 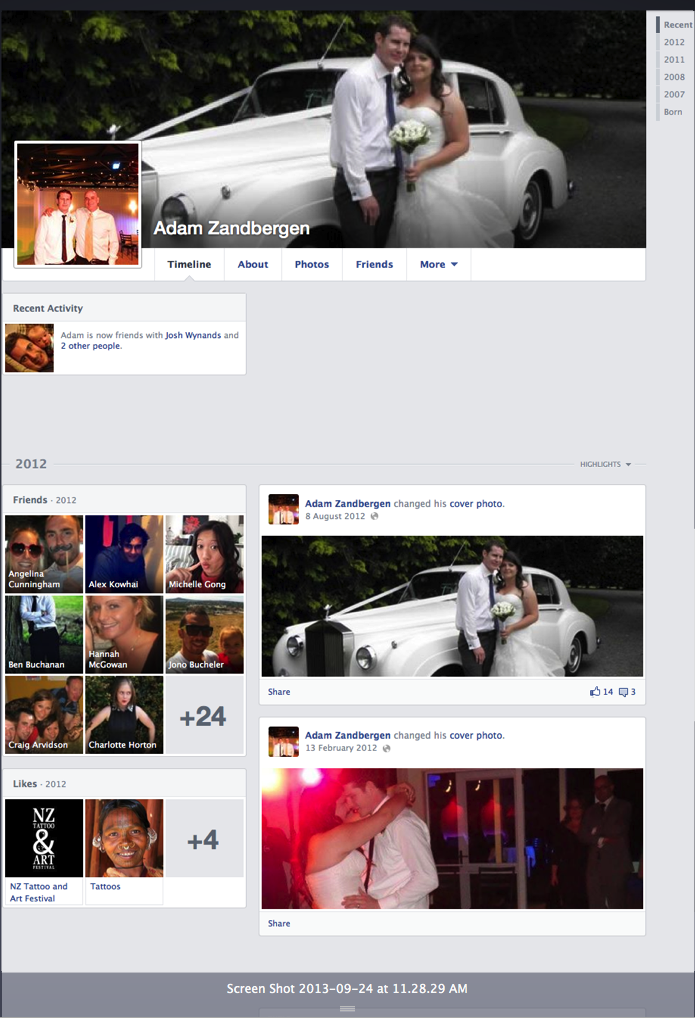 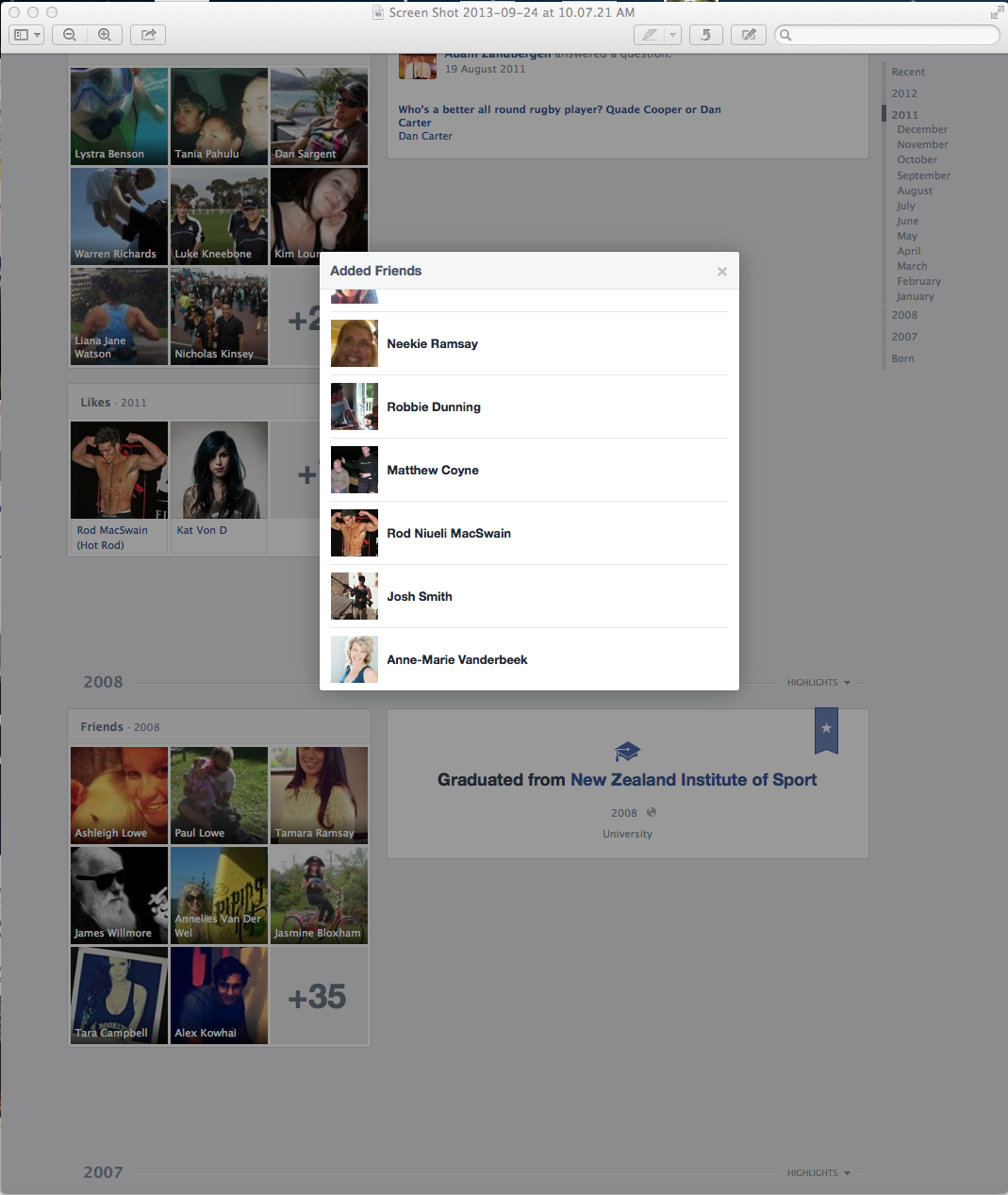 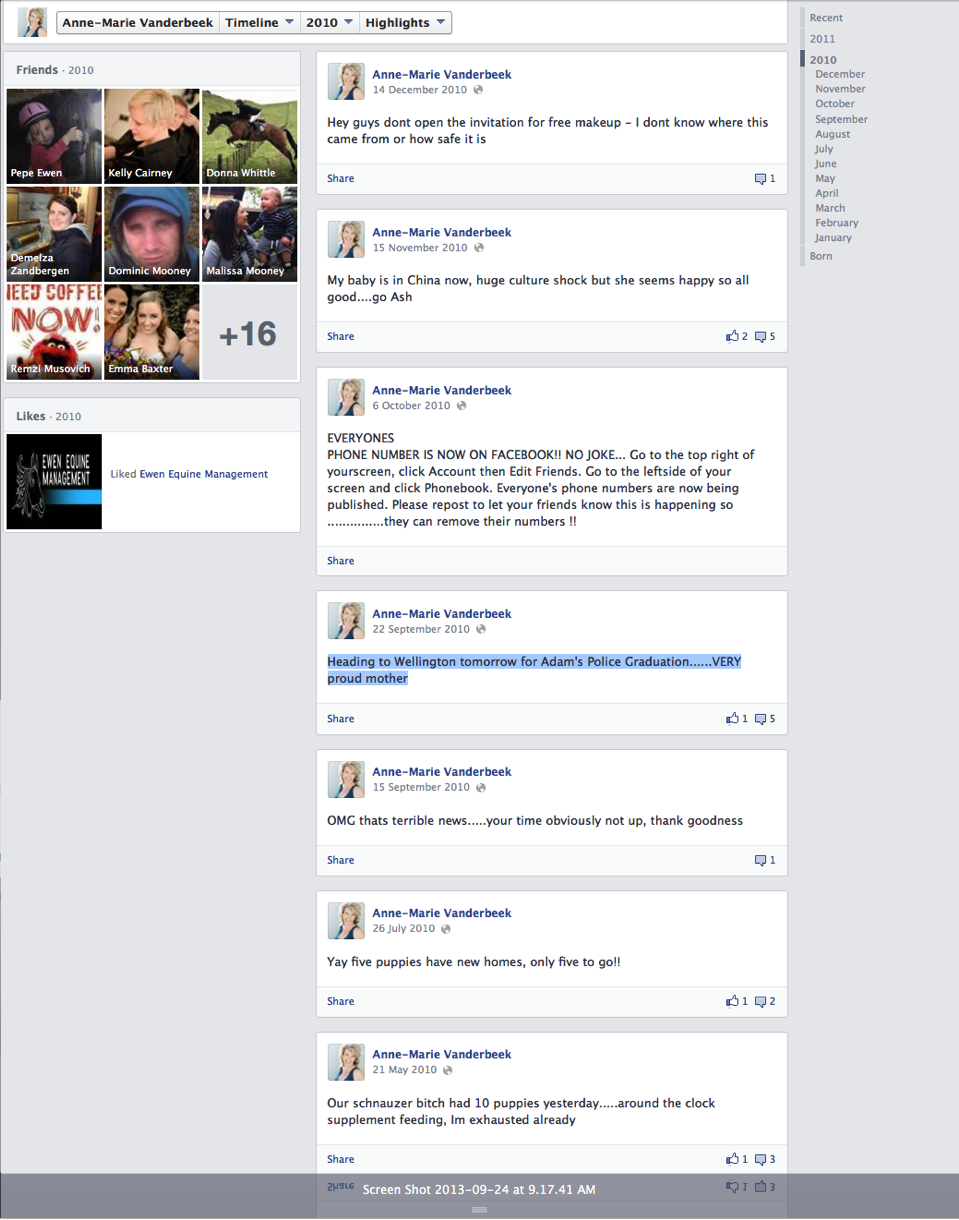 Hey Presto Adam Zandbergen is now no where to be seen on mummy’s Facebook “friends” page unlike his mothers employer, close friend of Clyde McLean, Pepe Ewing and the rest of Zandbergen’s close relatives:

As always, please feel free to contact us here at: laudafinem@bigpond.com – or for an alternative angle why not try contacting: pepe@ewenequinemanagement.co.nz – we did and the staff at Equine Management were very forth coming about their relationship with Clyde McLean et al, but of course we had used the proverbial carrot……seems its not just horses that find carrots irresistible. We’ll leave our readers with a fairly recent comment by a Kiwi judge Justice Rebecca Ellis: 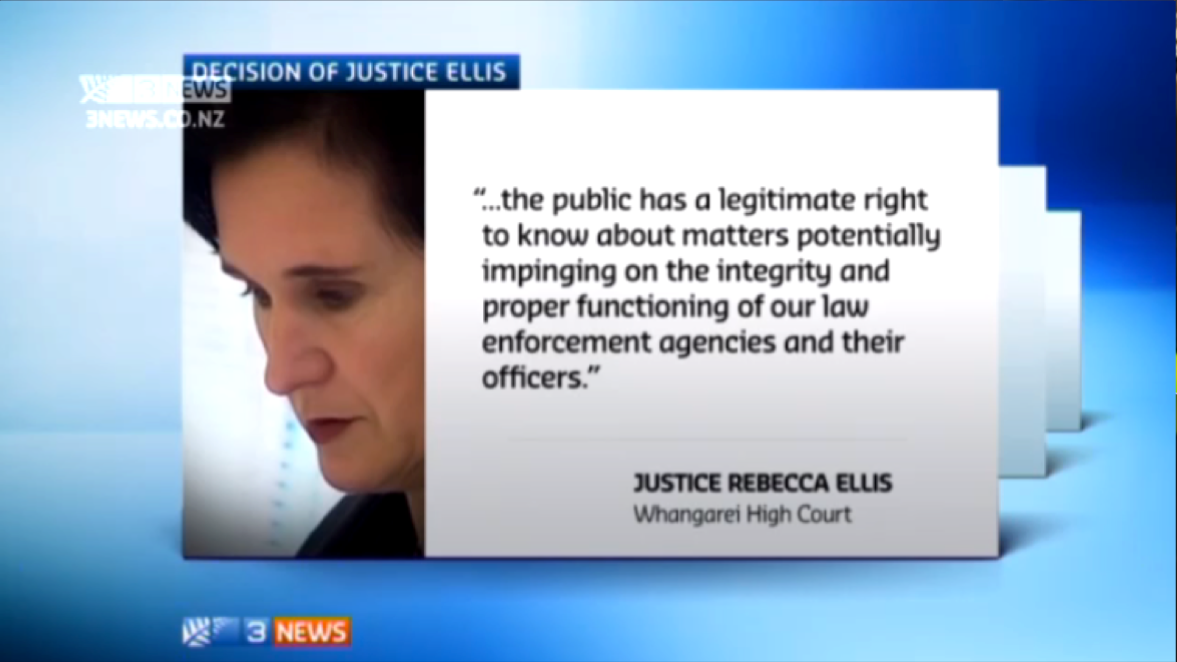