Yanks: biggest threat to global peace in 2014 – when will they see sense?

Americans, Seppos, Yanks:- universally despised by everyone [that is sane and empathetic], except the Israelis, have been identified by 68 countries in a 2013 survey as the biggest threat to World peace in 2014.

The “dark One” hears no evil, sees no evil, speaks no evil – but millions have died as Obama slept.

Hardly surprising when you consider they have been the biggest threat to world peace since the end of the second war. Sure the Russians were a major threat at times, but they were mostly in a support, or had a behind the scenes role, except in Afghanistan where they were clearly in contravention of international law.

Self Appointed World Police, the “Yanks”, have murdered tens of millions of innocent people through decisions made to allegedly alleviate political pressure on oppressed peoples of the globe.  The truth is far from this propaganda.

It is not just the direct acts of violence committed by the Yanks against their identified enemies, but sometimes those direct acts lead to matters spiraling out of control in countries that have been a victim of American brutality, and desire to win at all costs. Indirectly this has led to millions of truly innocent persons dying truly horrible deaths.

An example of this is what occurred under Pol Pot in Cambodia.  During the Vietnam conflict Communist forces used the Cambodia border areas to hide large military forces supposedly out of the reach of South Vietnamese and American military power.  Cambodia was a neutral sovereign power with limited military forces whose population was largely impoverished. 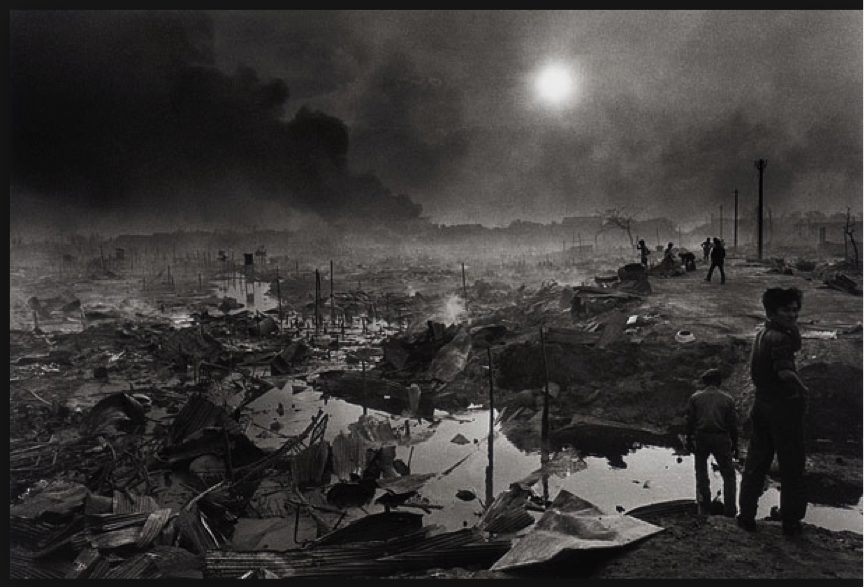 Few, if any, left alive because they were nowhere near the area indiscriminately bombed by the brave Yanks in their flying fortresses.

Pol Pot witnessed the educated Americans kill an unknown number of his people, whilst the educated people in the cities of his nation did nothing to stop it on the world stage.

In the fall of 2000, 25 years after the end of the war in Indochina, President Clinton visited Vietnam.  Whilst talk was dominated by the yanks desire to locate the graves of 2000 US soldiers still listed as MIA [missing in action], an act of great historical importance went virtually un-noticed.  As an alleged humanitarian gesture Clinton released extensive Air Force data on all American bombings of Indochina between 1964 and 1975. A [then] groundbreaking IBM designed retrieval system had collated data on bombing sorties conducted over Vietnam, Laos, and Cambodia.

Clintons reasoning was that the data would enable a large number of unexploded ordinance to be discovered and disarmed saving thousands of farmers lives annually, and which ordinance rendered large areas of valuable farmland useless, and which had caused starvation in especially Cambodia.

The database is by no means complete with large “dark periods” when likely secret bombings were done on heavily populated rural areas in Cambodia where there was complete losses for those on the ground.  The database reveals that from October 4, 1964 to August 15, 1973 the Yanks dropped far more ordinance on Cambodia that was previously believed.  Some say that the true figure is likely still 3 to 5 times more than what has been reported.  2,756,941 tons was dropped on the neutral sovereign nation of Cambodia in 230,517 sorties on 113,716 sites.  Of these missions 3,580 had “unknown targets”, and 8,238 missions had no target at all.  Why is this not murder? 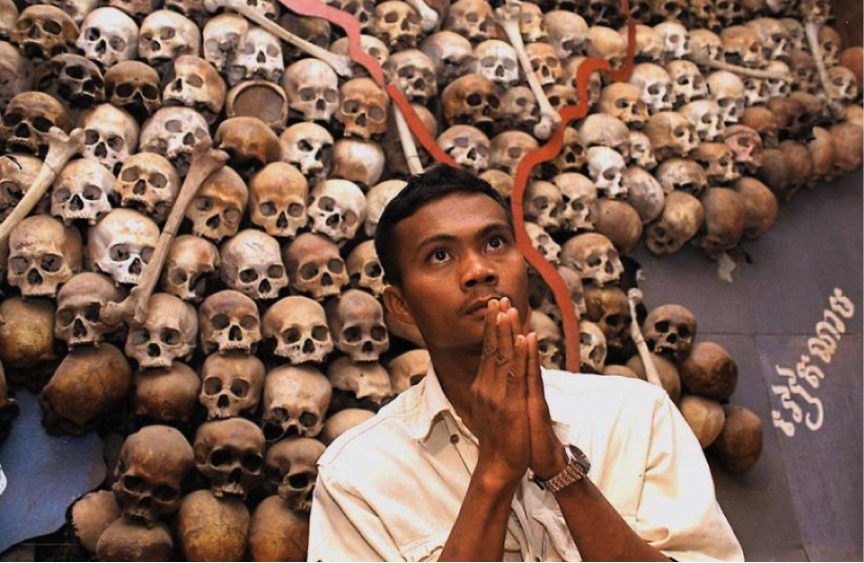 A Cambodian looking skyward in front of skulls placed in the shape of Cambodia. LF wonders if his prayers relate to what the yanks did that killed millions and then assured the rise of the Khmer Rouge

The data also discloses that the unlawful bombing started under the Presidency of Lyndon B Johnson and not Richard Nixon, a fact not before known. It is believed that 2,000,000 Cambodians were killed in the American bombing.  How is this different to what the Nazis did?

The impact of the murderous bombing, the subject of much debate for the past four decades is now clearer than ever.  Civilian deaths from American carpet bombing genocide enraged the poor populace that had survived the onslaught, and up until the bombing did not support the communists, to the extent that the rise of Pol Pot and the Khmer Rouge was assured, as was the advent of the Cambodian genocide of anyone that was educated, and “theoretically” had supported the Yanks.

No one with any brains really disputes the connection of the American carpet bombing genocide with the internal genocide that followed.  In basic terms the worth of a human life becomes “nothing” in the power vacuum that is left once the externally driven conflict is over.  Similarities can be seen with the Russian invasion of Afghanistan and what occurred after they left.  It will occur in Iraq as well, and probably in Libya.

During the recent Global survey by the Worldwide Independent Network and Gallup anti-American sentiment was not only recorded in antagonistic countries, but also in many allied NATO partners like Turkey and Greece.

The survey revealed strong animosity towards the US’s role as the world’s policeman. Citizens across over 60 nations were asked:

“Which country do you think is the greatest threat to peace in the world today?”

The US topped the list, with 24 percent of people believing America to be the biggest danger to peace. Pakistan came second, with 8 percent of the vote and was closely followed by China with 6 percent. Afghanistan, Iran, Israel and North Korea came in joint fourth place with 5 percent of the vote.  However only China and Israel are not in the sites of the Yanks.

The threat from the US was rated most highly in the Middle East and North Africa, those areas most recently affected by American military intervention. Moreover, the survey showed that even Americans regard their country as a potential threat with 13 percent of them voting the US could disrupt global status quo.

Latin America expressed mixed feelings towards its northerly neighbor, with Peru, Brazil and Argentina all flagging the US as the most dangerous country.

After its numerous threats of a strike on Iran, many countries voted Israel was the biggest threat to prosperity. Morocco, Lebanon and Iraq all chose Israel as the number one danger to world peace.  Again Israel is “little America” in the middle east.

In the survey participants were also asked:

“If there were no barriers to living in any country of the world, which country would you like to live in?”

Despite being the perceived largest threat to world peace, the US still topped the tables by a narrow margin of 9 percent. And of course why wouldn’t it be the place to live.  Wealthy from robbing the rest of the world, and with the biggest stick to cajole most other nations to bend to their will, America is a dream destination to end up:- as safe as you can be from harm by Americans.

In general 2013 saw a drop in approval ratings for the Obama Administration. A poll conducted by the AP-NORC Center for Public Affairs Research revealed that 50 percent of those asked thought that the political system in the US needed a “complete overhaul.”

In addition, 70 percent of Americans believe the government lacks the ability to make progress on the important problems and issues facing the country in 2014.

The survey comes two months after the first government shutdown in 17 years in the US, which cost the country an estimated $10 billion.

The American government’s credibility was dealt a blow earlier this year when President Obama made a call to strike Syria following a suspected chemical weapons attack by the Syrian government on civilians. The American public and the international community both opposed the action.  The world believed that Obama thought combat was a fucking video game, and they didn’t want to play. 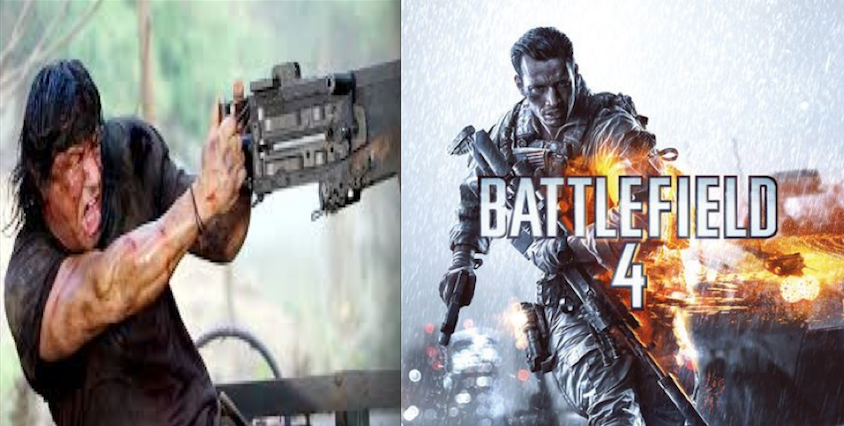 Despite the hunger for killing in movies and in video games –in reality hero’s are murderers too – no matter which side of the conflict they are on.

LF hopes that President Obama is taken out by any means, so that the murders he commits stop dead.  After all he takes out another leader every few days, which creates a power vacuum and a call for retaliation – so it will never ever stop – unless the Yanks say no to oppression, genocide, and war that they cause [directly and indirectly] allegedly in the name of peace.

Peace is not a contract signed by countries leaders – it is an emotion felt by countries peoples that leaders ought to follow. The Yanks have done a lot, all allegedly in the name of peace, but actually committed in acts of war.

LF feels that the last words should be in pictures [with an explanation from the photojournalists that risked their lives, and some of whom died:- probably the only hero’s in a conflict], that inform that people that care about people should be in power, rather than people that ultimately care about themselves like Barrack Obama, and his cowardly leprechaun, John Key. 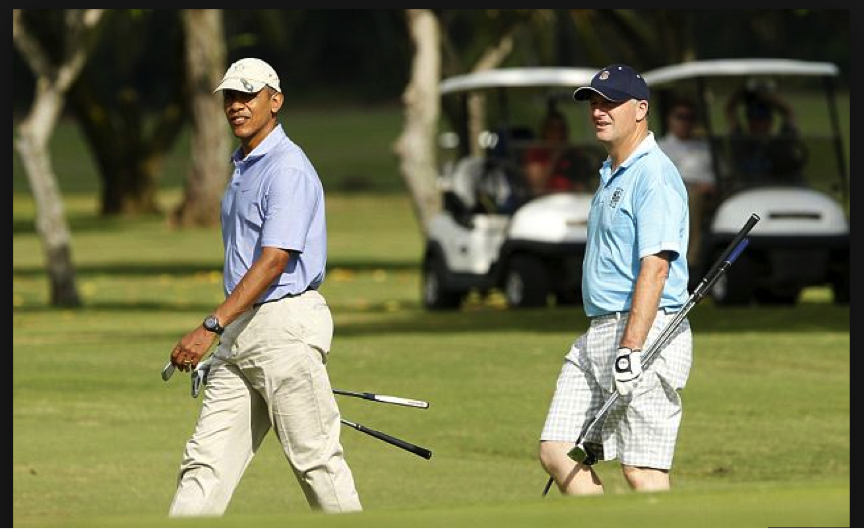 Two killers in profile – a key man “the leprechaun” follows the leader in a game of death, destruction, and destitution

In typical LF style, although we completely disagree with the Yanks murdering tens of million of innocents in the name of peace, we accept that the American soldier and their family members can be considered innocents to a lesser extent as they still belong to a country whose administration is by far and away the biggest mass murderer in the last 40 or so years.  So we have included photographs that depict the suffering of those that wage war:- ultimately our message is that “war” is not an option – it is only ever beneficial to those that will win as they write the history.  But now with the advent of the internet that history is written by witnesses not pro administration historians; 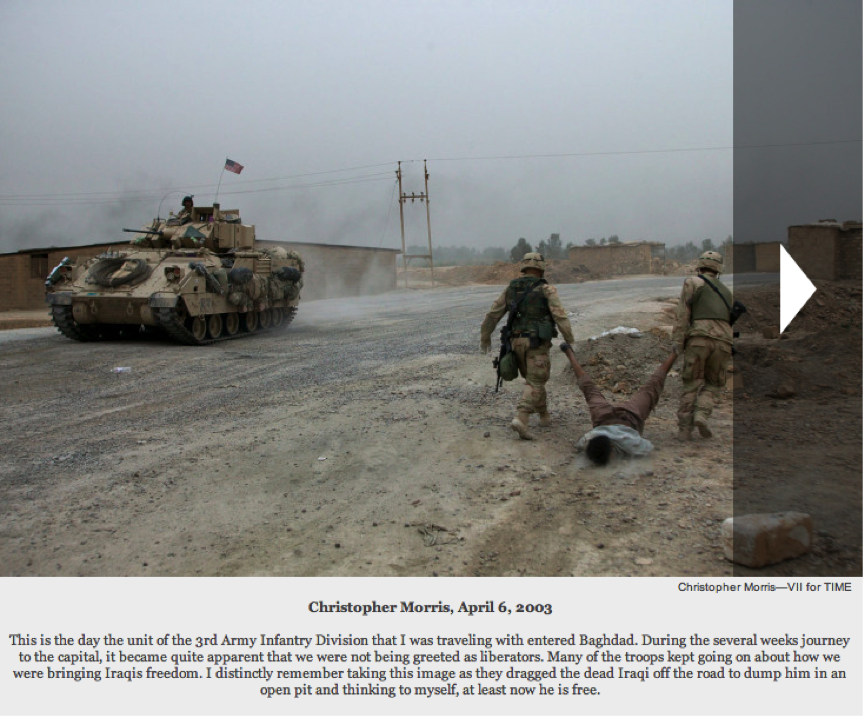 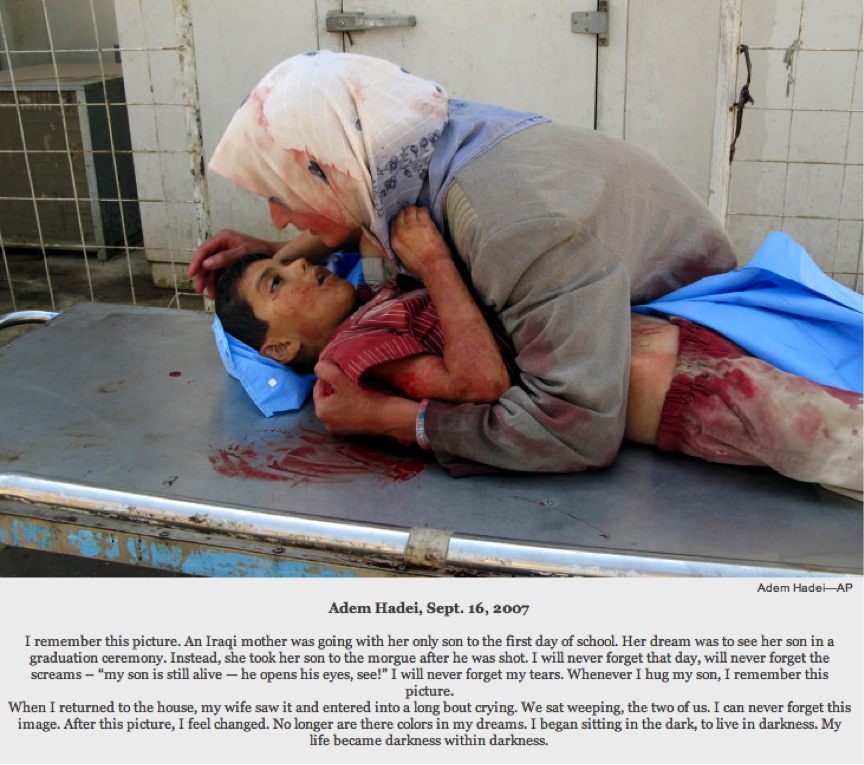 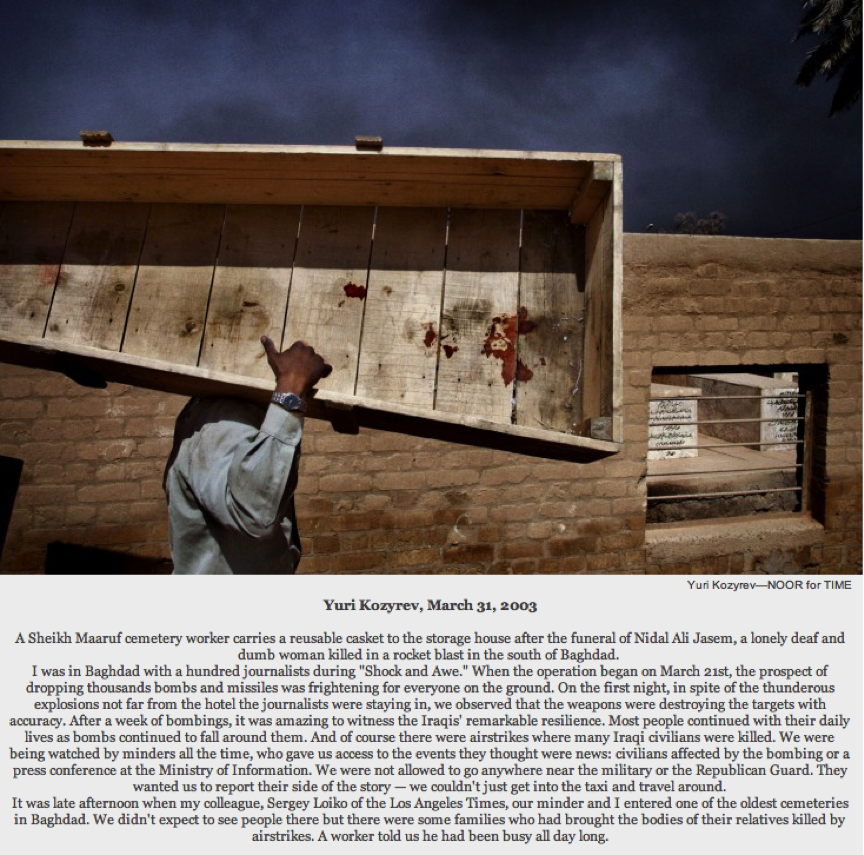 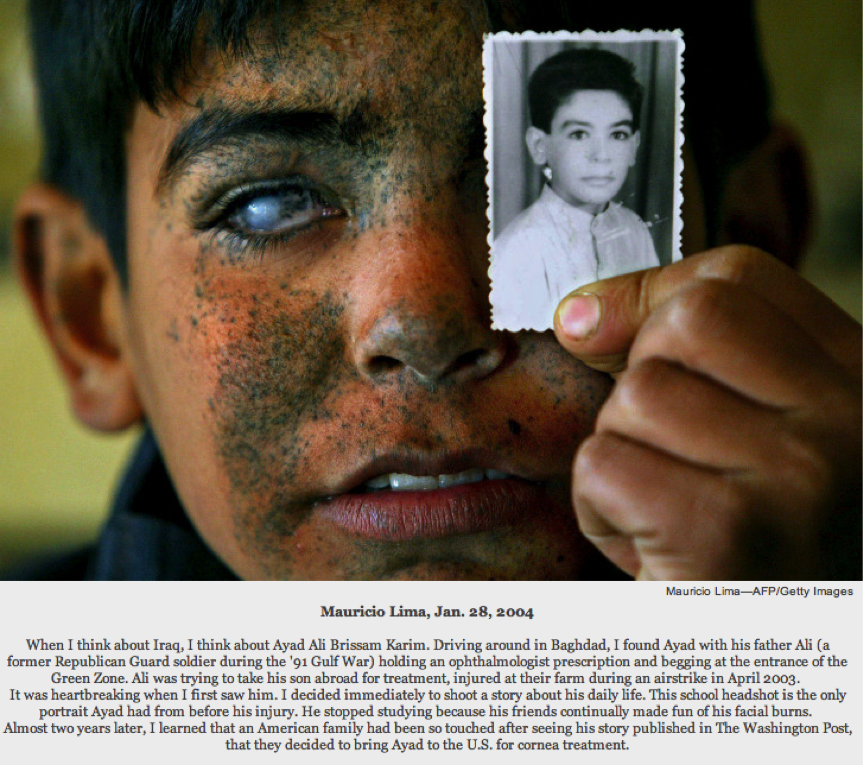 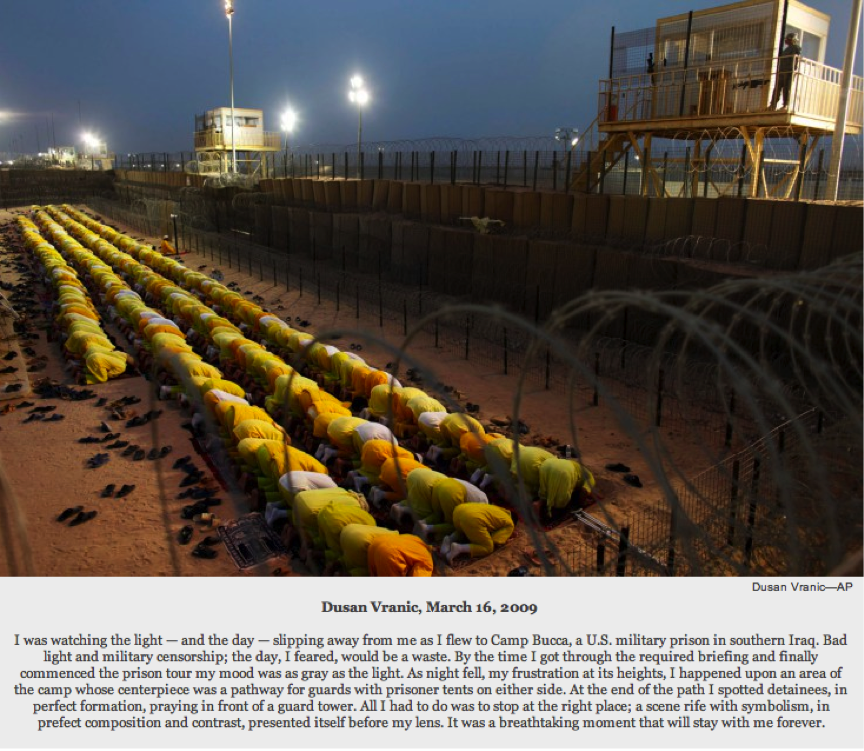 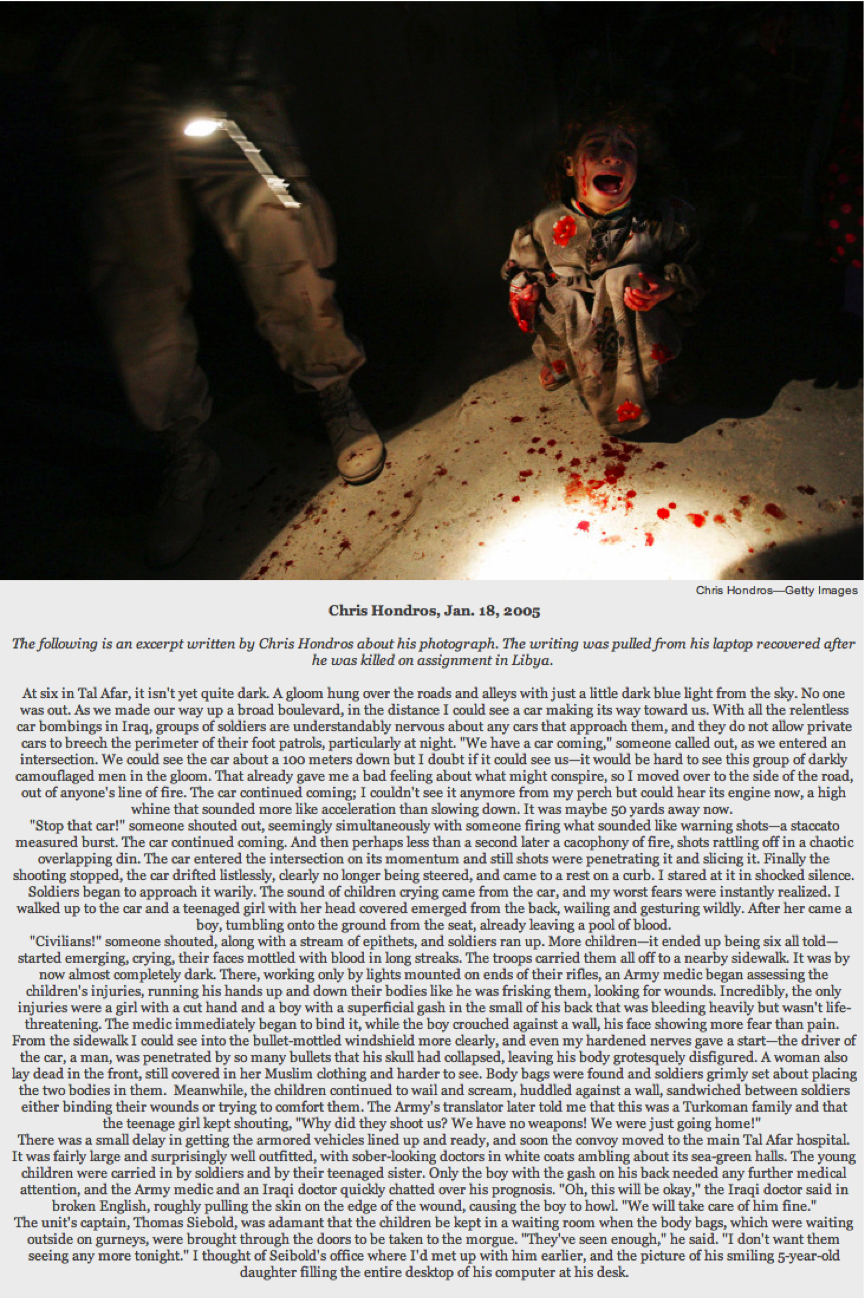 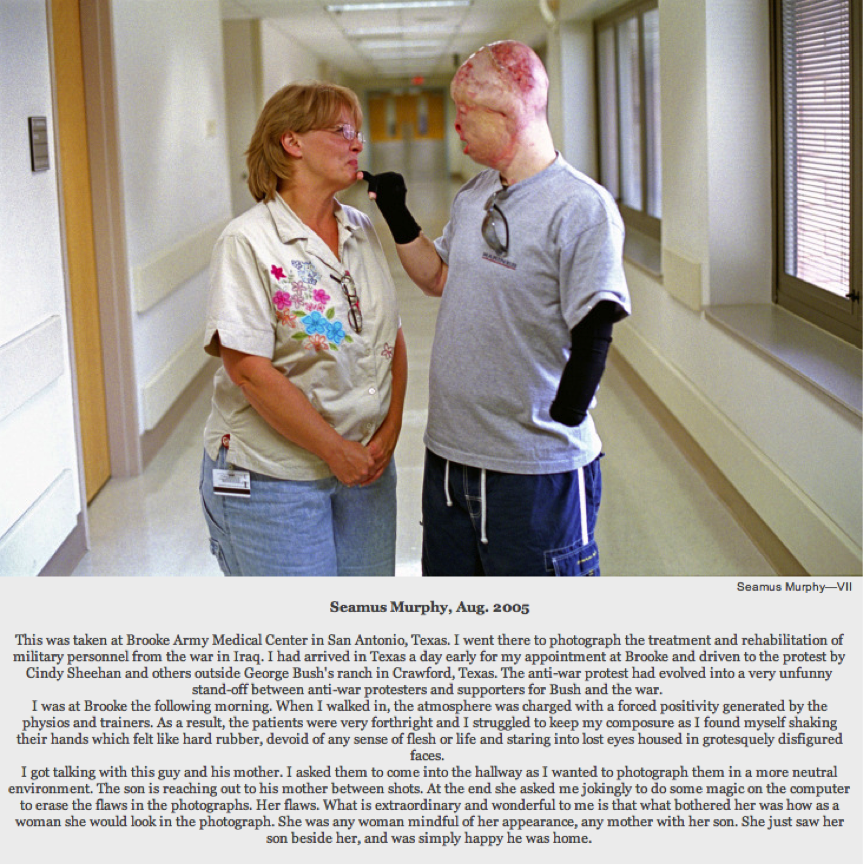 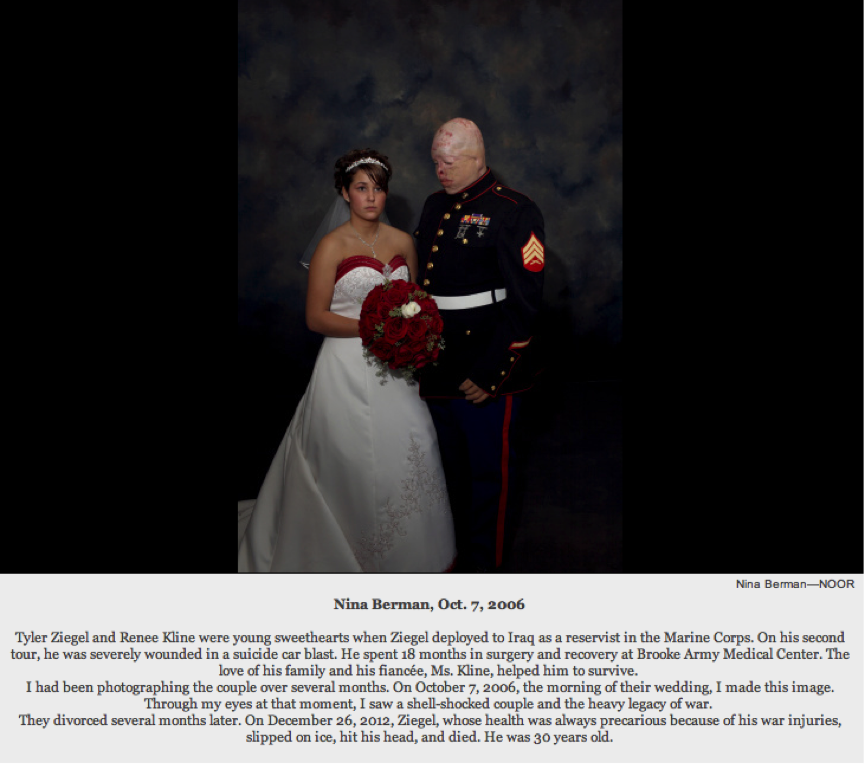 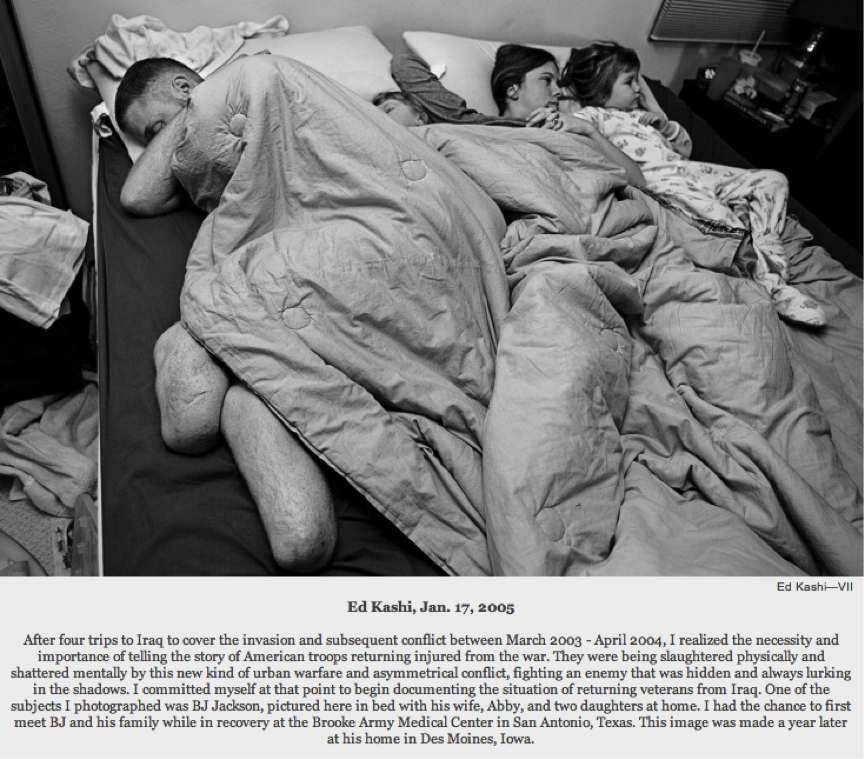 Mr Obama please take heed that you are not a good man as you profess so loudly to be.  You are not a man of God, nor a man with a great wisdom or intellect.  All you know, like the last 11 presidents before you, is war, retribution, oppression, and premeditated murder of not only your enemies, but your own people.  You need to be put on Trial at the Hague, or in Yank style, taken out by a drone.  A large number of LF readers are likely not old enough to remember Vietnam, but hopefully these images will help; 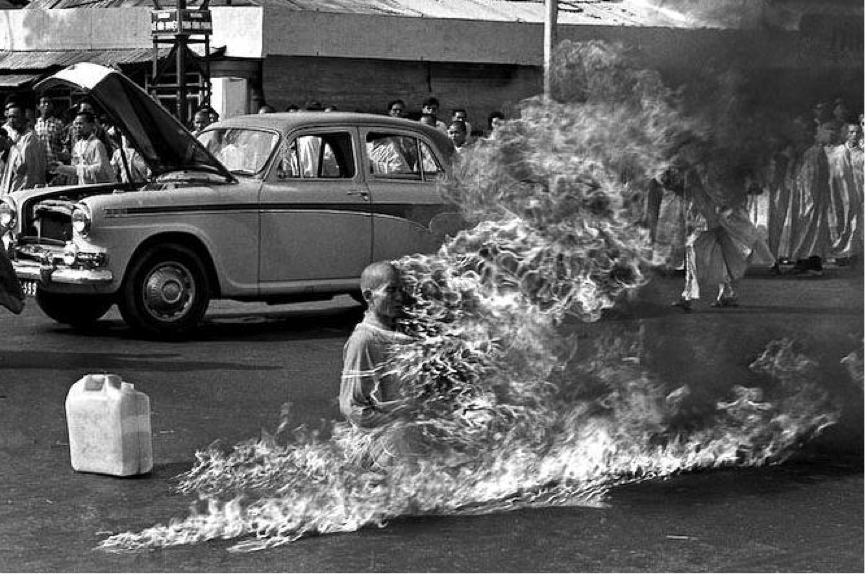 A monks protest went without notice – but this guy was a hero. 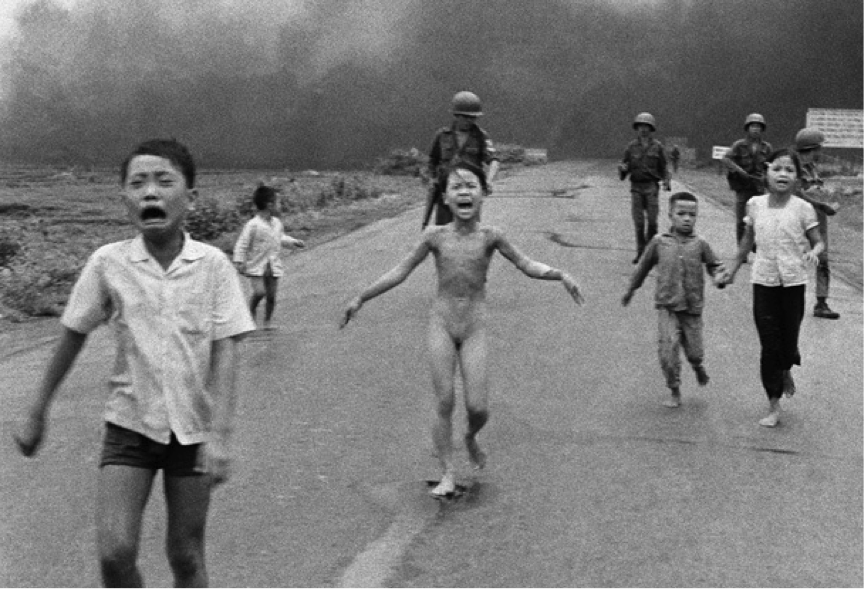