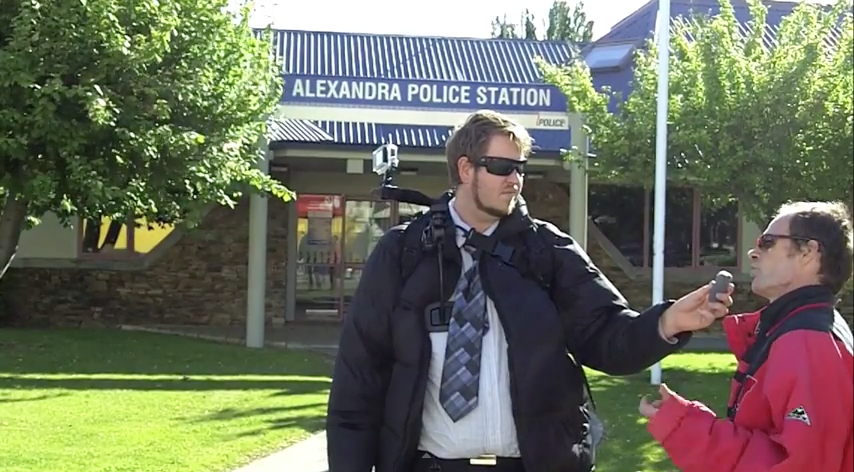 An Alexandra man will appear in the Alexandra district court tomorrow (31/12/2014) at 9.30 am after being charged under section  of New Zealands judicial proceedure Act with “Knowingly or recklessly” breaching suppression provisions.

A colleague of the cop who pled guilty to using a police iPhone to film a naked teenager showering central Otago, Police detective Alan Lee, issued Mr Wardill with the summons after Police attended his address and took possession of his computer.

Chris Wardill has a history with the Central Otago police having been interviewed for the web based Vinnie Eastwood show in November this year. 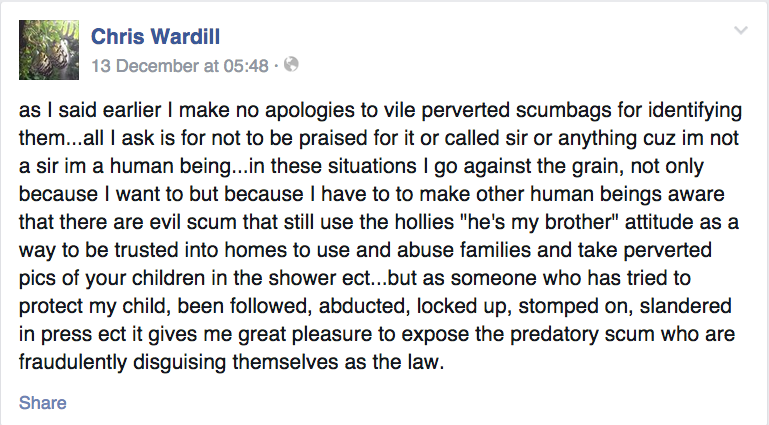 Mr Wardill has repeatedly made allegations of police brutality and claimed the existence of a paedophile ring within the local Otago police and Child, Youth and Family Services (CYF’s) community. In August 2012 Mr Wardill was also apparently charged by local police following a complaint from the local rag the Otago Daily Times, alleging death threats:

Threatening to kill
Christopher Wardill, 43, of Clyde, was remanded until September 20 for sentencing for three charges of threatening to kill on July 4. Wardill telephoned a newspaper office wanting a story published and become abusive and aggressive to a reporter and other staff when he was told they could not help.

Just how much truth there was in the allegations levelled at Wardill by the Otago Daily Times and the timing of those allegations, in our view, raises another set of very unsavoury questions around local police conduct.

Mr Wardill and Vinnie Eastward certainly seem to have ruffled a few feathers amongst the Central Otago élite and the local cops with their repeated allegations of an active paedophile ring, an allegation that seems to have fallen on deaf ears as far as the mainstream media is concerned. 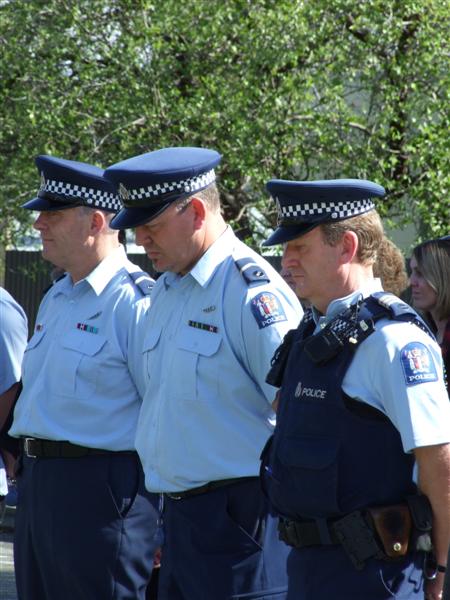 A quick Google search also reveals a great deal of online animosity and nastiness, whilst largely anonymous, obviously posted by opponents of Wardill and Eastwood;

Vinny Eastwood aids pedophiles on his low budget bedroom blog radio show. he aided 3 sex offenders by allowing them to come on his show and claim innocence. what is Vinny Eastwood really into, how big is the AXJ Actions 4 Justice pedophile ring really????? – John Downie

The question is are the local cops amongst those anonymous opponents? Local police involvement in the online attacks against Wardill or not, it seems to us that the Central Otago area command has a few serious systemic cultural issues. dodgy name suppression orders, police corruption, including the protection of cops going back quite a few years, some of whom have clearly been active paedophiles.

It also seems to us here at LF that the New Zealand police are in the throws of their latest shit-slinging effort, obviously designed to alter public opinion, or at least intimidate, with the use of force, aka bullying, thrown in for good measure.

Just how appropriate it was for one of the sex offender Constable Barry Clarke’s local police buddies, detective Alan Lee, to be attempting to maintain the corrupt covering up of his perverted associates behaviour by enforcing a seriously dodgy name suppression order certainly throws open the question of police integrity.

Of course the mainstream medias silence in this particular area is now infamous; the British press having long assisted in burying this form of criminal abuse by individuals of high social standing against children for decades. That was until very recently when it became impossible for those involved to continue with their “plausible denials” with the weight of mounting evidence against the offenders growing by the week.

Whether or not the allegations surrounding the Otago police and CYF’s are true is a matter that needless to say deserves further investigation by an appropriate authority other than the now infamously corrupt New Zealand police, especially in light of the UK allegations and involvement of police in what appears to have been a decades old coverup.

In fact there have been allegations of child sexual offending surrounding the Otago police in particular for years. As far back as 2007 allegations surfaced in an investigative article, “To Serve and Protect”, written by New Zealand investigative journalist Ian Wishart.

Those allegations however where all too quickly buried by the then Prime Minister Helen Clarke, her Labour government and her police Commissioner Howard Broad, who incidentally had also been inveigled in allegations of sexual impropriety whilst stationed with the Dunedin Criminal Investigation Branch (CIB);

To Serve and Protect –

…….Tom Lewis immediately instructed Detective Sergeant John “Poulan” Scott to action a search warrant at Audrey’s home and bring her in for questioning. The events that followed are the first evidence of a massive police cover-up operation beginning.

Ian Wishart’s 2007 piece provides good reason to now stop and think. Whilst the allegations contained in his research were historic and they were at the time refuted, so were the allegations that are only now being taken seriously by the UK authorities. In fact at the time New Zealand police HQ and the government went to great lengths attempting to discredit one of the police officers, Tom Lewis, who had made some of the allegations to Wishart, Lewis recalling in great detail the goings on inside the police hierarchy at the time. 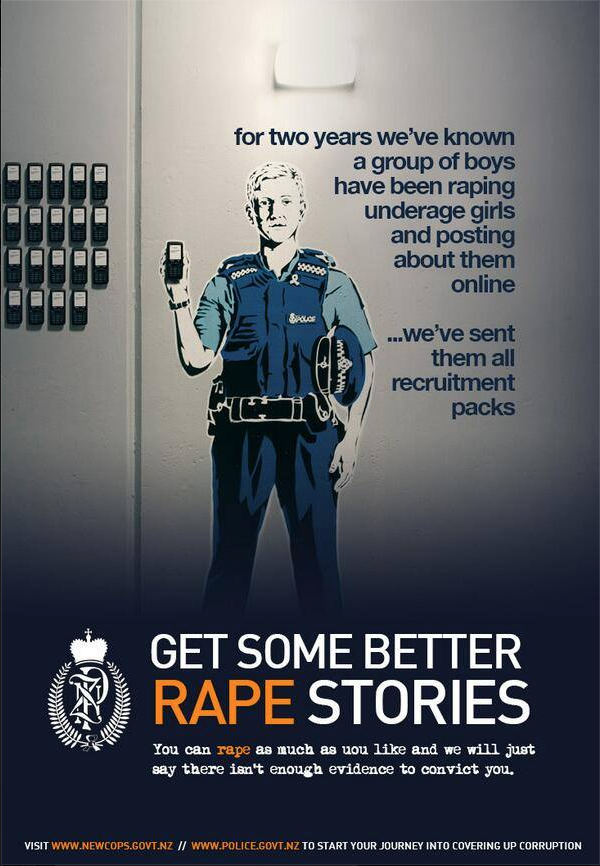 A replica police poster with altered message produced by blogger Martin Bradbury during the Roast Busters scandal, New Zealand police threatened Bradbury with incarceration as a result. Apparently good satire is also crime in the land of the long white shroud, but only if its at the police’s expense!

Australia’s ongoing recent Royal Commission into the Institutional Response to Child Sexual Abuse has heard hundreds of sad stories of what happens when society becomes too complacent, or places too much trust in authority, or those hiding behind an institutions perceived credidibility and integrity. The New Zealand police should in no way be exempt from that same all too often required suspicion, especially in light of the way police have failed to deal adequately with cases such as the recent Roast Busters scandal. 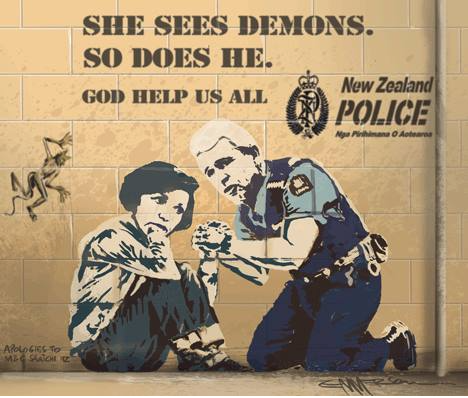 Name protection has only ever been there for the protection of victims, it was never intended that it be used by a perverted judicial system and police force to protect the identities of the sex offenders themselves or perpetrators of other crimes against the person for that matter.

The Sensible Sentencing Trust (SST) currently have a petition running if readers would like to stop by and express their own displeasure with the law as it stands, readers can sign the SST petition by clicking HERE.