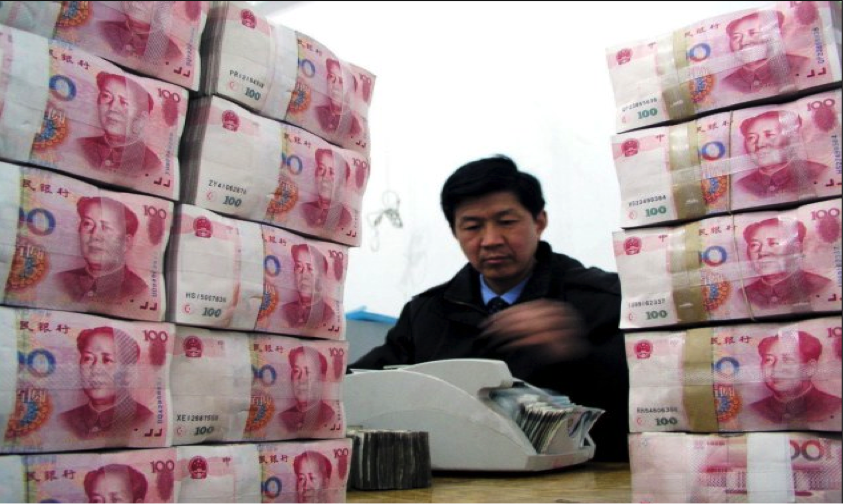 The Auckland housing dilemma – Will a generation of Kiwis be stuck renting from offshore landlords?

In Auckland the price of residential housing has reached a critical point.  Interest rates are at record low levels never seen before in the lives of most first home buyers.   The government moved to try and ease pressure on the market by making the minimum deposit 20% which effectively meant that the only buyers hurt were first home buyers.  But that’s John Key for you.

Investors can use cash and equity in their current portfolio meaning that the rich get richer.  Australians have always been big investors for a number of reasons.  One of the biggest reasons why Aussies buy in New Zealand is that they avoid property tax, which in Australia is about 30% on any profits made on properties other than your own residential dwelling.  In Australia there is also massive stamp duties that often amount to as much as the real estate agents fees.

Then there are the other immigrants that come into the country that have a lot of money.  These people are mainly Asians, and of this segment, the wealthiest are mainly Chinese.

At auctions, prices have been going through the roof as the lack of stock hits record lows, and immigration flow accelerates to form a value vacuum upward to celestial levels, which is, to an extent, saving the bacon of those previously hit by the global property collapse of 2007 – 2009, but what cost is it for those trying to buy for the first time.  In New Zealand property prices have doubled each 7 to 10 years, and if the numbers were done these recent increases are probably just an adjustment back to doubling 2007 values by 2015-2016.  But what happens in the next 12 months will prove crucial to whether a generation of kiwis will be renters all of their life. 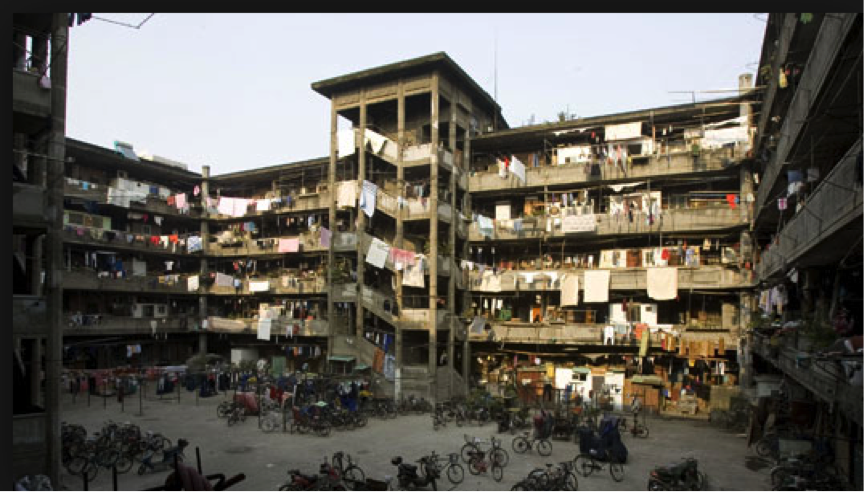 But no one can argue that Auckland, the countries real capital city, is the only place cash rich immigrants want to live.  It is the only true international class city in New Zealand, has a wonderful harbor, is cosmopolitan, and a larger percentile of inhabitants have not been hit with the ugly stick, and of course house prices always go up, unlike the other cities who have not had the recovery in value because the inhabitants are poor, dumb and ugly.

LF research on the poor, dumb, and ugly aspect of this article is based on information relating to our researchers incredible prejudice and dislike for people who come from anywhere but Auckland, so its pretty reliable.

But what’s the answer to removing the “pressure cooker” environment to the current Auckland price hike, which may be about to take off again once the banks are back in the market come February 2014.

Well we recently read a tweet by Dermot Nottingham that suggested that the answer lay in only allowing immigrants that have come from countries that allow reciprocal property ownership to New Zealand citizens.  Nottingham tweeted that this would cut out the Chinese, and most of Asian.

One of the reasons for attracting wealthy Chinese immigrants is because they bring money, and allegedly lots of it.   Automatic citizenship comes with $10m NZD being deposited in a New Zealand based bank account, or the purchase of property or business interests to the same value.  At this level an immigrant does not even have to speak “engwiish”.

Following the global financial collapse on 2007 New Zealand was not alone in trying to increase immigration of wealthy Chinese who cannot actually own a single square millimetre of their home turf, and therefore love the idea of buying others mud in large amounts.

Since 2007 cash-strapped governments slashed requirements for visas and citizenship to attract particularly wealthy Chinese immigrants in the hope of drawing capital to their shores. 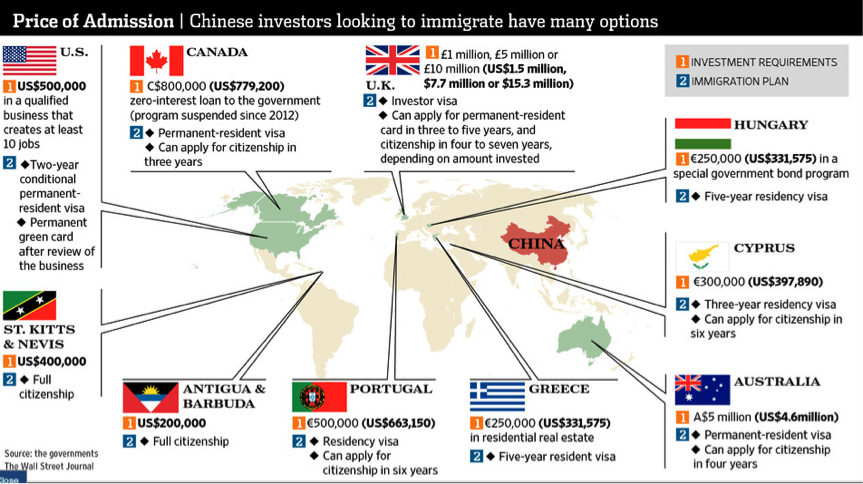 While investor immigration programs are technically open to all, immigration lawyers say that governments are targeting anxious Chinese who are looking for potential escape plans for their families and protection for their assets in case of turmoil at home, which turmoil is not if, but when.

Jean-Francois Harvey, an immigration lawyer at Harvey Law Group in Hong Kong stated of the competition to attract chinese immigrants;

“There is an all-out immigration war emerging for the Chinese,”

The best deals of the moment come from countries in the Caribbean and Southern Europe suffering from weak economies and heavy public debt loads. The attractions are visas or citizenship that allow for relatively unfettered travel and cheap real estate, either for investment purposes or for homes.

In the eastern Caribbean, the island nations of St. Kitts & Nevis and Antigua & Barbuda are battling it out to attract immigrants. Both nations are struggling in a region wrecked by hefty public debt loads and anemic growth; the International Monetary Fund forecasts the Caribbean region’s 2013 growth at just 1.25%

St. Kitts, a tiny island nation with a population of about 53,000 that lies 1,200 miles southeast of Miami, has led the charge in easing citizenship requirements in the region. Citizenship is granted to those who spend $400,000 on real-estate investment or donate $250,000 to the country’s Sugar Industry Diversification Fund. A St. Kitts passport offers visa-free travel to most Western countries.

Not to be outdone, Antigua & Barbuda, St. Kitts’s neighbor 70 miles to the west with a population of about 90,000, is set to launch its own program. Modeled on the St. Kitts program, an Antigua citizenship can be acquired for a limited time for a donation of $200,000 to the country’s national development fund.

Hong Kong-based immigration lawyer Denny Ko, whose firm, Henley & Partners, was hired by Antigua to help set up the investor immigration program said of the program;

Although Antigua’s program hasn’t started yet—politicians are debating whether the country should require participants to live in the country for a number of days each year—but the marketing for it has already begun.

Government officials in both Antigua and St. Kitts won’t reply to requests to comment.

Another battle over residency visas is playing out in Southern Europe. Greece’s government is promising renewable five-year resident visas to foreigners who spend at least €250,000 ($328,000) on residential property—undercutting its neighbors’ visa offers by at least €50,000.

The program, which is about to be launched, offers visas that allow free travel in most of Europe for 90 days every six months. Portugal last year began offering a “golden visa” to foreigners who purchased a house valued at least €500,000, while Cyprus also launched a program for those who spent at least €300,000 on a property.

“Everybody in Europe is coming to us to sell their houses to the Chinese,”

A spokesman at the government agency Invest in Greece said that the lower price was intended to attract more residents to the country.

A spokesman for government-run Cyprus Investment Promotion Agency said 1,000 properties have already been sold to Chinese investors, mostly in the coastal town of Paphos. The spokesman reported;

“We can’t comment on whether Chinese investors would be interested in Greece,……We’re focused on ensuring that the Chinese people who invest in and move to Cyprus are warmly welcomed,”

Spain is planning a similar residency option but it hasn’t released details.

But for some Chinese investors, the visa isn’t everything. Hungary last year began offering five-year residency visas to those who invest €250,000 in a special government bond program, but programs like these are less interesting to Chinese, who typically want to buy real estate for use as rental properties, vacation homes, or simply leave them empty in hopes of a rise in housing prices. Denny Ko of Henley & Partners opined;

“The mentality among most Chinese is they look at the real estate first, and the visa second,……Some just view the visa as a bonus.”

Wealthier countries are also eager to attract Chinese but the price is steeper. In the U.S., the cost is US$500,000 and the creation of a certain number of jobs.

According to data from the U.S. State Department, [in the fiscal year ending September 2012,] 80% of the 7,641 applicants to the US program came from mainland China.

In November 2012 Australia launched a “significant investor” visa that allows foreigners to settle for up to four years in exchange for a 5 million Australian dollar (US$4.6 million) investment into bonds, managed funds or equity investments. As of May, the country attracted 170 applicants, most of which are believed to be Chinese, representing a total investment of $850 million AUD.

So New Zealand is not alone, excepting in the number of immigrants it attracts for its size, punching far above its weight to the detriment of New Zealand born citizens. 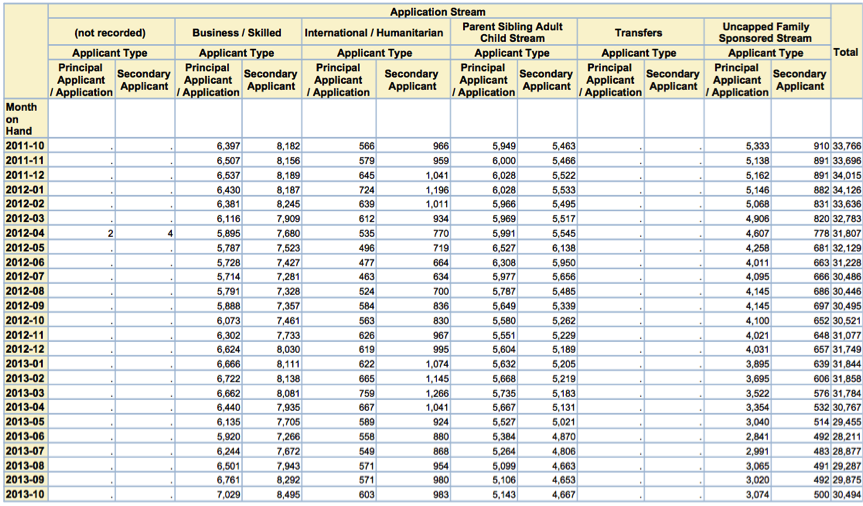 The numbers speak well of how the Asians are targeting New Zealand property to an extent that Auckland property will be unaffordable to those not on the ladder. New Zealanders will be a generation of renters.

80% or more of those under business/skilled are Asians who are getting accepted because they are by New Zealand standards, rich – only because they are not on the poverty line – which a lot of New Zealanders are.  Oh and they can buy houses – lots of houses cash – to rent to Kiwis.