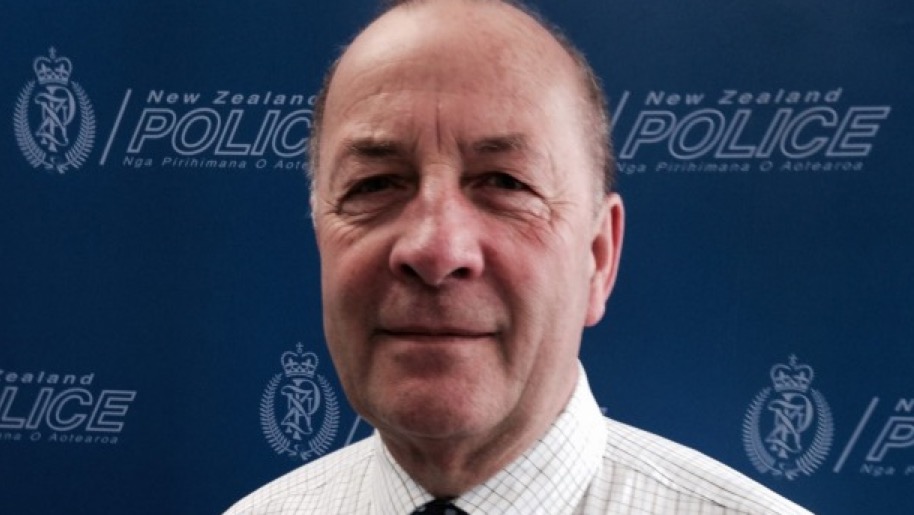 A week ago LF was notified that members of the New Zealand Police had been attempting to contact LF readers and supporters in New Zealand via their mobile devices, although the purpose of this contact, beyond the obvious implications, as yet, remains unexplained.

Of course the New Zealand police are not to happy with the fact that groups such as Lauda Finem are growing in number, some like LF, more successfully than others.

Of course along with the growing public interest has come a growing disdain for our work exposing corruption, particularly among the more corrupt element within New Zealand’s police. In fact one LF reader recently sent us images of a few texts that he’d received from an anonymous individual, who claimed to be a police officer when sending text messages, which whilst somewhat amusing, were never the less of concern.

The problem with the New Zealand police, a problem that in fact appears to be unique to New Zealand, is that the local cops are not shy when it comes to threatening media organisations within New Zealand.

Recently this type of intimidation and the tactics employed, particularly against independent news sources and journo’s, was seen with the unlawful police raid on local Kiwi investigative journo Nicky Hager’s home.

Of course Hager had no idea that the police would resort to this type of tactic, he now of course is a little wiser. LF on the other hand have documents in our archive dating back more than thirty years which evidence New Zealand police interference in that country’s media, interference that was at the time largely designed to coverup the serious criminal offending of a group of bent police officers, corruption that was ultimately successfully buried; until now. 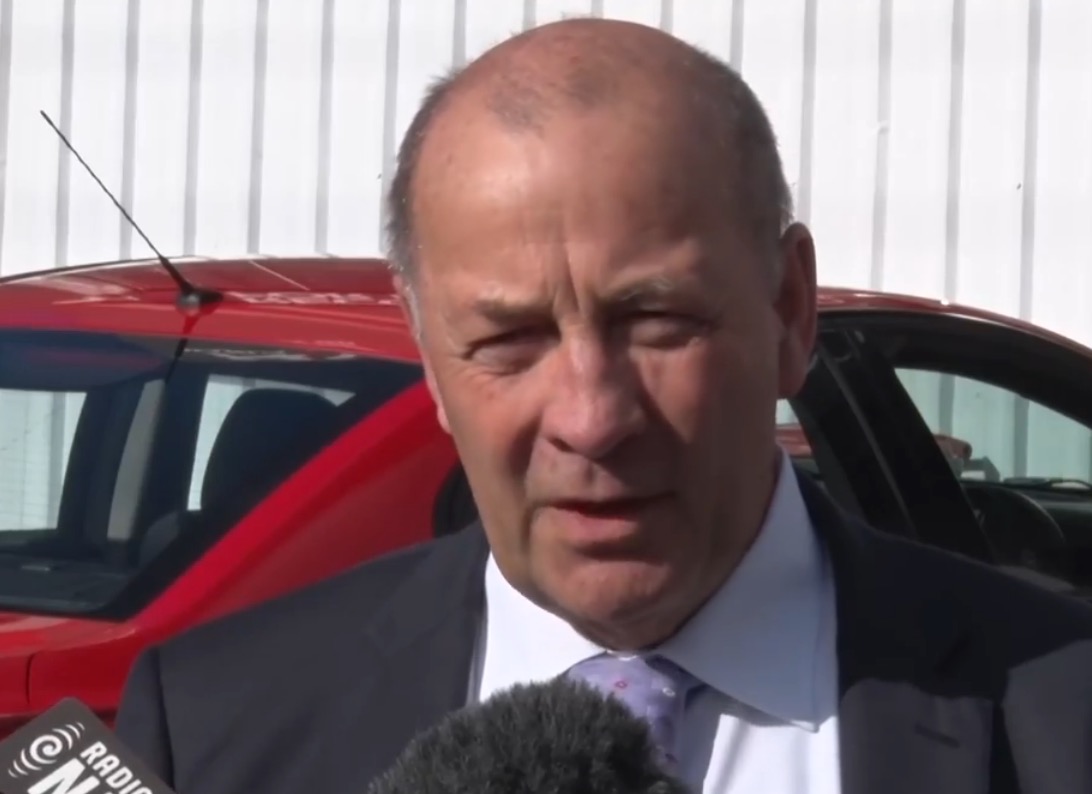 Was Detective Inspector Bruce Good up to no good?

We here at LF also know that there is little point in making formal complaints, as protest of any sort is also ignored by the authorities; those such as the IPCA who are responsible for the day to day oversight of New Zealand police behavior.

With the above in mind we have taken the decision to expose the any new police effort at both media manipulation and intimidation in any form.

Naturally enough most Kiwi’s are aware that Nicky Hager’s home was raided by police with a warrant obtained using seriously dodgy paperwork. What Kiwi’s will not be aware of however is that at almost the same time another raid took place, police having used similarly false allegations and dodgy affidavits for the benefit of the issuing judge.

We here at LF now believe, based on evidence received and the chronology of those events, that both raids had something in common, that there was one individual responsible for supplying the false information that enabled police to further make false allegations in affidavits in support of two search warrants, which were then executed within a matter of days of each other.

These home invasions, for that’s what in effect they were, in our view, had been designed with the “chilling effect” in mind. Certainly the raid on Nicky Hager’s home was never intended to obtain evidence, rather it was designed by police purely to send a not so discrete message……that even journalists, in that case Hager, were neither safe nor beyond their reach.

We are of this view because the information that the police received prior to these two raids was not only false, but that it’s veracity was in fact very easily checked, had police been of a mind to do so, but they didn’t bother.

The accuracy of the information police received was never central to how the police decided to use it, as it was in any event, despite being wholly false, sufficient for police to obtain the two search warrants they desired.

So there you have it, police have been using search warrants simply to intimidate the Kiwi public, investigative journalists, justice advocates and alternative news outlets.

This strategy however was largely curtailed when Hager did the unthinkable, something the cops hadn’t in fact counted on given his personal financial position; Hager spending large sums of money  to challenge police skullduggery, a challenge which inevitably saw the New Zealand police receive a bloody nose. 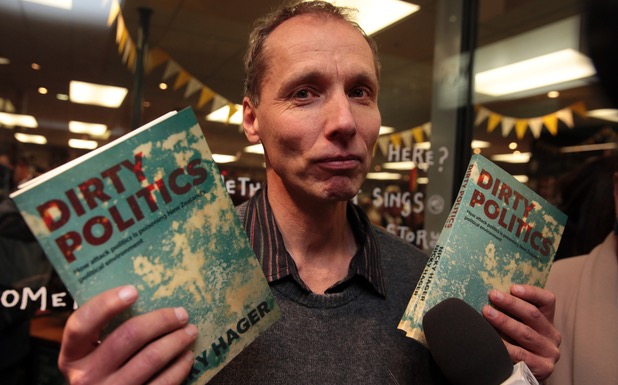 Of course the police’s Machiavellian maneuvers are almost always strategically calculated risks and any subsequent failure to get away with it, explanations and or mia culpa’s issued and published in the mainstream media is as insincere as they inevitably always look; as solid as Balsa.

For a number of years the New Zealand police, unlike most other western law enforcement agencies, have spent vast sums of Kiwi taxpayer dollars monitoring and countering any social media that is detrimental to the police objective, be it corrupt or not.

Of course this is not something that one would normally expect of any police force in a democracy, but in New Zealand the local police force is largely an unchecked law unto itself; a situation that has been repeatedly allowed to exist, reinforced by successive governments failure to subject the the country’s police to a wide-ranging Royal Commission of Inquiry into Corruption.

It is all but accepted, and seemingly tolerated by local politicians, that New Zealand’s police are corrupt and clearly have the ability to influence political success or failure. Of course this is a reality we canvassed a few years ago in a post entitled New Zealands Most Powerfull Political Force is?

LF had its Facebook page blocked in New Zealand over three years ago, a fact that the Facebook corporation failed to formally notify us of. Google too has manipulated search data, specific to LF, in New Zealand. All of which has been done at the behest of the New Zealand police. 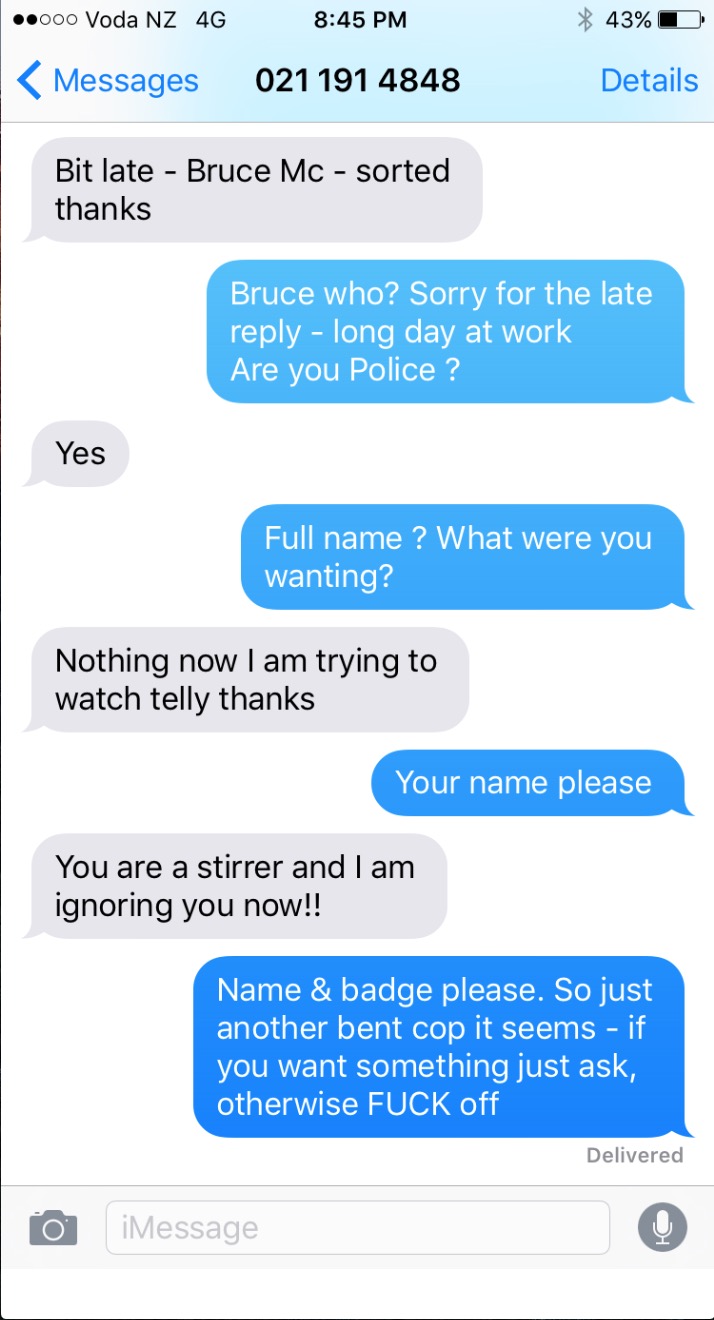 So when you see us on twitter using the hash tag #onlyinNZ you’ll know what we are referring to; corruption pure and simple.

The New Zealand mainstream media have also played along with the New Zealand police, and have been doing so for decades, undoubtedly in the name of survival and profit. In the coming months we’ll be posting evidence of just how the New Zealand police assisted a police officer escape New Zealand after he had been charged with rape, and how senior police managed to convince an editor to shut down a journalists investigation into the corrupt officers responsible; a scam that can be traced right to the most senior police officer, then commissioner John Jamieson. It gets worse however, years later those same police officers incited a now respected journalist to fabricate a story designed to advance police propaganda.

Now for the most part the police’s latest efforts have done little to silence LF, or our supporters. Whether the New Zealand police hierachy like it or not LF is here for good, we are not going anywhere and we will report on any corruption that is brought to our attention.

That said and as already touched on the latest in police efforts seem to involve retired police officers contacting LF supporters via the targets mobile phone. In doing so these retired officers are seemingly posing as serving police officers, a very dangerous game indeed. 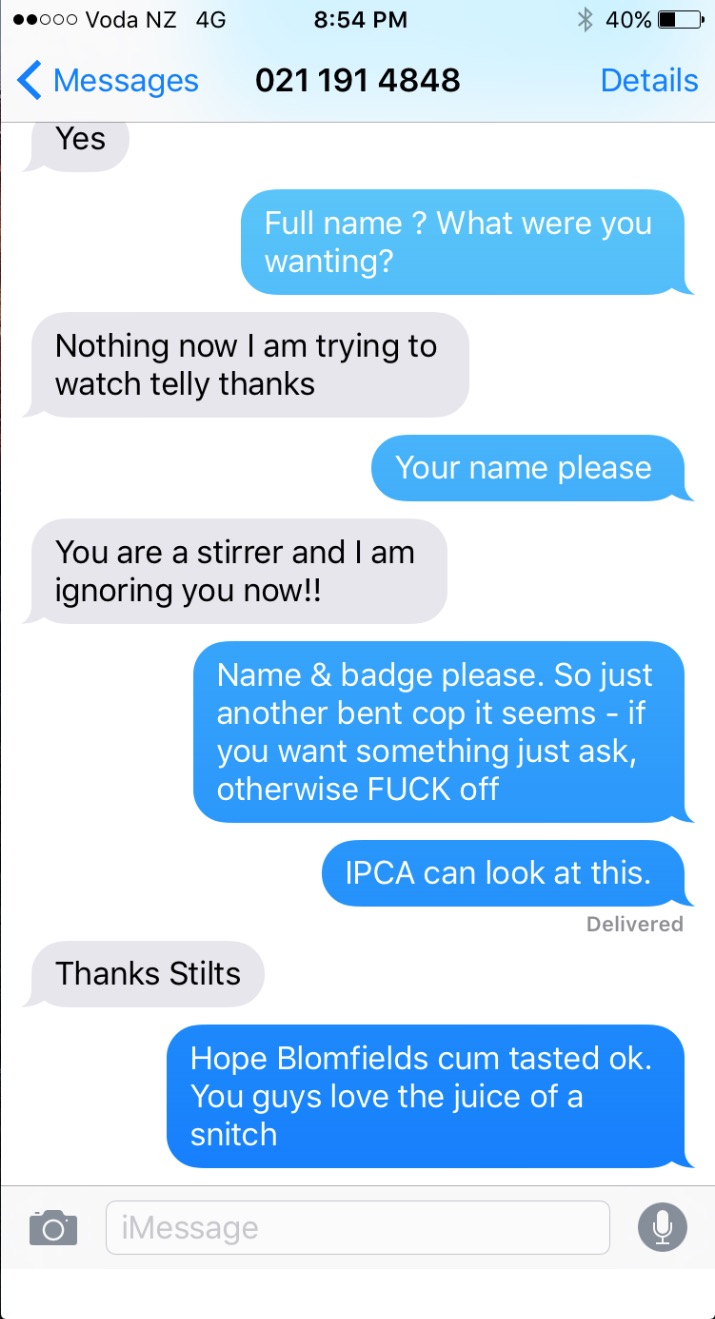 Team LF assisted the target of the latest police interest in establishing who the apparent owner of the police phone was.  It would seem that the mobile, with a police number, belongs to the now retired Detective inspector Bruce Good, a man who apparently has just received a QSM for his services to the National party.

We know that the phone belongs to Inspector Good because he has apparently, somewhat helpfully, left a personalized message on his voicemail service, the voice on which just happens to be the same as that found on Bruce Good’s many television and radio appearances; the last of which is to be found in a New Zealand Herald article covering police raids on New Zealand’s Head Hunters Motor Cycle gang (see bibliography below).

We also know that Bruce is at least supposed to have retired, because that is the status he himself advertises via his LinkedIn profile, along with bragging rights for his obviously treasured QSM National Party retirement gift: 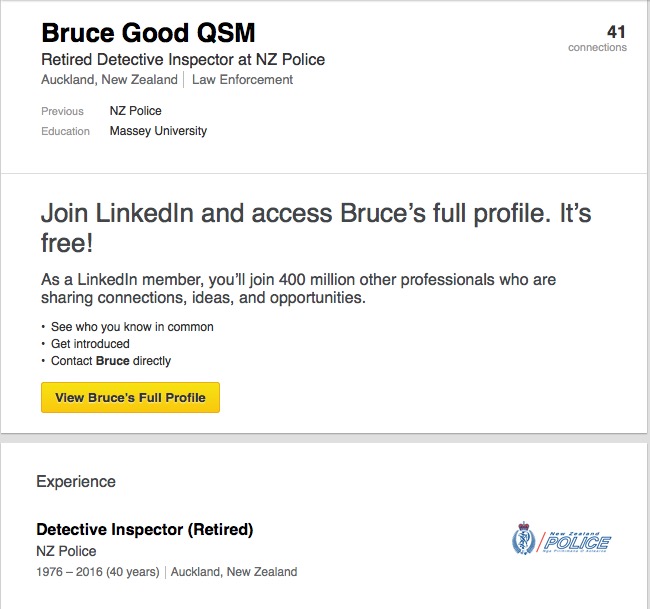 So what was the recently retired Detective Inspector Bruce Good QSM doing using a police mobile phone (021 191 4848) to contact an LF supporter? What’s more, why didn’t Mr Good identify himself properly when asked to do so? Why was it that he didn’t feel it necessary to declare the purpose of his call?

Last but by no means least, why did Mr Good feel it appropriate to call an LF supporter a “Shit Stirrer”? Is this how New Zealand police officers normally conduct themselves or go about their daily business, retired or not? Of course the questions are rhetorical, the answers to which should be obvious.

Clearly, Bruce Good is not your average Kiwi cop, he certainly appears, at least on paper, to be an educated man, which is in itself unusual for a New Zealand police officer of his generation; normally they’re as thick as two short fucking planks: 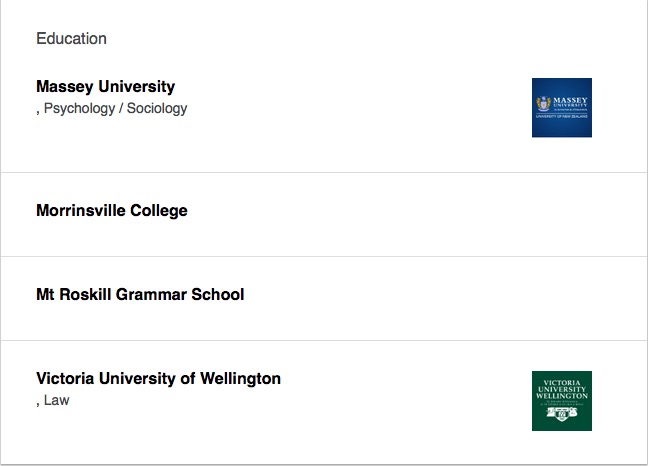 Now whilst we accept that the New Zealand police are corrupt, said corruption inculcating the highest of commanding officers, we can’t quite get a handle on what it was that Bruce Good thought he might achieve with his latest little stunt.

Sure, we have our theories. The timing of Good’s texts seem to fit with police being extremely displeased at certain documents LF have recieved, and the subsequent discoveries LF have made with respect to Ben Rachinger and Cameron Slater.

It could also have some bearing on Matthew Blomfield’s alleged connection to local Kiwi gang, the so called “Head Hunters” and allegations that Blomfield is in fact a police informant.

So in the absence of any excuse for this stunt it’s likely that Bruce Good simply set out to attempt to intimidate another LF supporter, for reasons at this stage known only to himself and any other police officers within Good’s little cabal.

It’s certainly not the first time this has happened, it’s just the first time that one of our supporters has thought to tell us here at LF before erasing the texts and the mobile number involved, evidence which is critical if a formal complaint is to be laid with the IPCA.

Now whilst we are not holding our breath for a positive or honest result, we have been advised that a formal complaint has in fact now been made in this case.

Our advice to readers and supporters, or any campaigner who finds themselves in this position, always keep the evidence, always make an IPCA complaint, if only to contemporaneously document the bad or strange behaviour. It’s also important to note that almost all police mobile phone numbers start with the prefix; 021 191

We will of course keep our readers informed as and when additional information comes to hand.