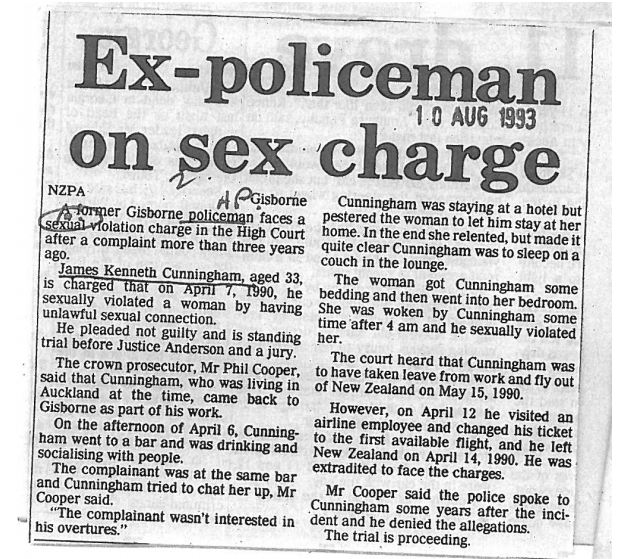 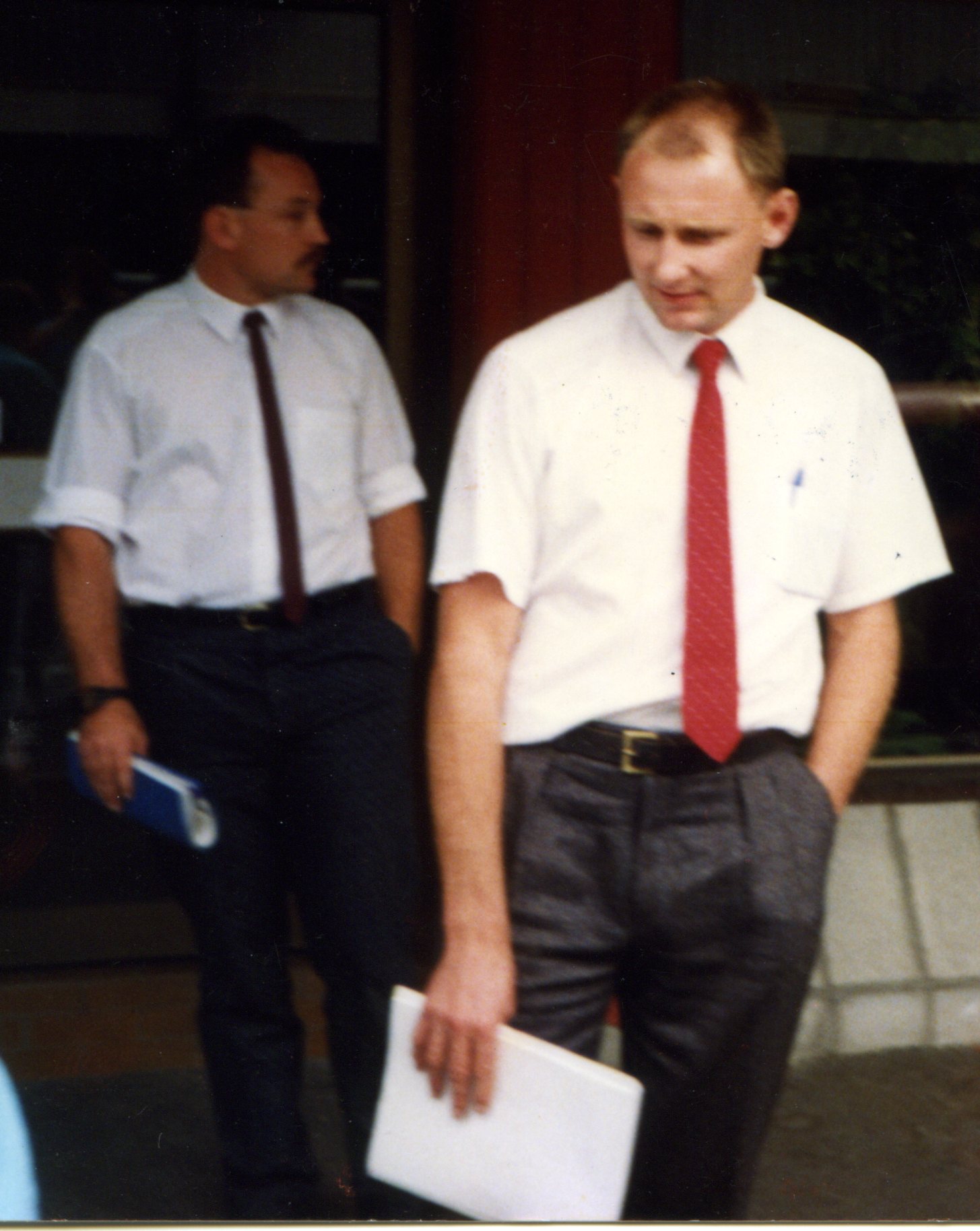 For many months now Lauda Finem have been researching the whereabouts of Ex-Detective James Kenneth Cunningham (it must be said that the NZ Police force refused to provide information on exactly why it was that Cunningham had left their employ).

Until recently Cunningham himself had also proven quite illusive. There was very little to go on, all of the orthodox methods of investigation proved fruitless. We knew that at least one of Cunningham’s bent police cohort, Detective Stanley Mathew Willcox, had been re-invented after completing a degree as a mature age student.

One clue had surfaced, a thesis that had been written and published in 1999 by a student completing a Master of Arts, psych major, with honours at Auckland University, one James Kenneth Cunningham.

(as at the 1/11/2011 the above reference was the only entry on the site, as at the 28/1/2012 Cunningham may have facilitated more up loads of his study material, the page keeps changing)

Working back from the 1999 date we calculated that the student in question would probably have entered University as an undergraduate in 1994/95. We confirmed the estimation by calling the Arts faculty at Auckland University. These dates dove-tailed with the extradition and end of Cunningham’s trial in late 1993, we just needed to establish an age on entry – mature age students were somewhat rare in the early 1990’s.

We were then able to establish that a person with the exact name had been registered to practice as a psychologist in New Zealand on the 29th June 2001. The intervening 2 years were to be explained with the discovery that this individual had completed the additional qualification of a post graduate diploma in clinical psychology, which normally requires a period of supervision as an intern.

Armed with this knowledge we then sought to find the registered psychologist Mr James Kenneth Cunningham. Normally, in our experience, this should have been a simple exercise. It, However proved to be anything but. Mr Cunningham, MA (Hons) Psych, PG Dip Clin Psych had completely disappeared into thin air. This disappearing act is what first raised our suspicion and our belief that we had probably found the person we were seeking.

Normally professionals and or academics are easily located. Someone who had gone to the considerable effort of completing a Masters in psychology should have been practicing, Mr Cunningham, however, was not listed in any telephone directory nor could we find any trace of the man having attended so much as a seminar or conference in the ten years since his registration.

After some time we managed to locate one lonely entry on an obscure website which appeared to be for individuals who shared their bad experiences of New Zealands unique, albeit strange, state imposed accident compensation corporation (ACC). This particular forum post was seeking information, from fellow forum members, about one James Cunningham and another assessor Dr Finucane, we assumed because they were required to have an assessment as part of their compensation claim.

The thread and its request for information had not been responded to; at least with any detail of use to us, the responses appeared to be nothing more than plugs extolling Cunningham’s talent.

We concluded, nevertheless, that the posts subject, Cunningham, was one in the same man that had studied at Auckland University. Cunningham therefore had to have been in practice but where?  Hours of searching revealed nothing, absolutely no contact details were available in any of the places one would normally expect to find a business listing for a psychologist, a highly unusual and extremely suspicious circumstance.

Eventually using a more complex set of search terms we located another post on the same forum:

James is very good… I have followed his work for a number of years and he would be one of the finest neuropsychs to come out of the system .. I have yet to hear a bad word about him…

The post was again unusually flattering and reflected a similar writing style to the previous sycophantic entries, notwithstanding the fact that they had purportedly been posted by unrelated members. This time however we at least had Mr Cunningham’s contact details.

The author of the posted recommendation “tonyj“ was undoubtedly a huge fan of Mr Cunningham’s work, claiming to have followed James’s work for a number of years. Just quite how it was that he had managed to do that he doesn’t say. We, however, found the claim quite extraordinary, given that there was absolutely no material reflecting Cunningham’s work, other than the thesis, available online (the online moniker “Tonyj” belongs to a man we now know to be one Anthony Lowe of Mangere Bridge Auckland New Zealand, an associate of Rodney Milner, and bent ex-cop turned psychologist James Kenneth Cunningham).

A telephone call was then made to Monarch Psychology. The receptionist was asked to describe Mr Cunningham:

We then enquired as to whether he had ever been a police officer in Gisborne:

“No I don’t think so, I think he’s originally from Taranaki”

The game had now changed, the man in question had been a mature age student when he attended Auckland University, our profile of Cunningham the cop was beginning to align with that of the Greenlane Neuro-psychologist. We then asked to be put through to Cunningham, the receptionist refused. Apparently she had been asked to vet all of Cunningham”s calls. We then advised that, given her description of Cunningham and the various other detail we had we now believed that this Mr Cunningham was the man we had been looking for. The receptionist then thought it wise to put our call through to Cunningham. We then politely introduced ourselves following which the first thing Cunningham said was:

“I don’t even know you, I am not the person you’re looking for”

A strange response really, after all had he not been the man we were looking for he may well have been better off saying; oh yes and how can I help you?  But of course Cunningham didn’t. He knew who his caller was,  likewise after almost 23 years his caller had absolutely no doubt who he was talking to having recognised Detective James Kenneth Cunningham’s voice.

Desirous of obtaining irrefutable evidence, we arranged for another of Detective Cunningham’s victims to attend his Green Lane practice, on that occasion equipped with a camera. Cunningham, however refused to show himself, instead preferring to send his receptionist out to again deny that he was the bent cop in question:

What did Mr Cunningham have to hide, if he was not the man we had been looking for he would have had nothing to lose by greeting his curious visitor. Had he fronted up and introduced himself Cunningham would have put paid to any doubts that he was who he had claimed, an unrelated party, guilty of nothing more than having the same name as the bent cop we had been seeking. As an educated man, an experienced psychologist, surely that must have crossed his mind? As the bent cop being sought however he could not afford to be sighted, that would have inevitably resulted in his identity being confirmed.

More than aware of Cunningham’s likely reaction other avenues were explored including searches of various public records. Noting the receptionists earlier claim that Cunningham had originally come from the province of Taranaki we went searching. Those searches provided the required confirmation and tied Cunningham to his parents in Taranaki. The subsequent telephone calls provided the incontrovertible evidence we needed. Cunningham’s elderly mother provided all the additional detail required, his contact details at Monarch including email address and cell-phone number. She also provided an account of the events that engulfed her, her son and the police almost 21 years ago. She recounted her own personal recollections of the trial, contempt for the police and the involvement of then district Commander Rana Waitai.

Over the following days calls were also placed to other staff at Monarch. One of those staff, the practice manager, Ange, claimed not to have known about Cunningham’s past and that they would be doing their utmost to get rid of Cunningham now that it had been brought to their attention. Not that we believe Ange, you see Cunningham is her boss, he owns the business and the building. Not that Ange could have been expected to know that her caller possessed a comprehensive file on her employer and his assets.

So why was it then that Mr Cunningham felt the need to hide from the investigator?  In addition to having been accused of serious sexual offences in 1991 Cunningham had, only months earlier, been involved in very serious corruption, falsely accusing and charging innocent men with his accomplices Detective Malcolm John Thomas, bent ex-cop and break & enter expert; Brian McBreen and Gisborne CIB head Detective Senior Sergeant Gary Condon. Cunningham had also been caught on film in the process of attempting to assault yet another victim of this corruption. No doubt James and his wife, the South African born, Wendy will be more than just a little upset with mum, but all his mother did, unlike the New Zealand police force, was tell it as it was:

We will be posting the whole story in the coming days; the story of quite extraordinary police corruption that inveigled police at the highest rank, including the office of the commissioner. Why was it that police in 1991 assisted Cunningham’s flight from justice by tipping him off? Just why did they need him to leave the country in a hurry? Answers to those questions and more coming soon