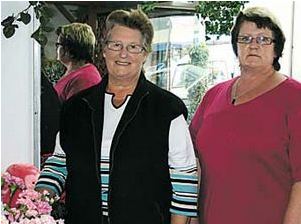 As the old saying goes; “it’s nice to put a face to a name” however, it’s even better if you can put a face to those who would’ve otherwise been reluctant to cough with the evidence.

Our happy camper and intrepid traveller, Carlos, Laudafinem’s investigator on the ground in New Zealand was given a tip off, at a hostel, over the weekend as to the whereabouts of Marcia Cunningham (Nee Findlay), “baton boys” absolutely delightful mother, You’ll remember, shes the one that posted bail for James Kenneth Cunningham at the Old Bailey in London a few years back, the very same bail he was to later skip;

“BRIGHT COLOURS, lovely arrangements and vibrant smells, is what greets you as you step into Findlay’s Floriste in Stratford.

Findlay’s was originally started in 1944, by Laura Findlay, who opened it with the help of her sister when her husband went to war.

Laura was also the first woman in Taranaki to become a professional florist.

In 1966, Laura’s daughter, Marcia took over the business when Laura moved to New Plymouth.

This year, the business has been taken over by yet another Findlay, Marcia’s daughter, Suzie.

“Mum was going to shut the shop, and it would’ve been too sad to see it close,” said Suzie, who has worked in the shop with her Mum for 20 years off and on before buying it.

The florist has very much been a family affair and has always been part of the Findlay’s lives.

“I always helped mum out in the shop,” said Marcia.

“And I can remember being in the shop with grandma too,” said Suzie. “It’s just always been a way of life for us.”

Originally, Marcia didn’t want to be a florist, she would’ve liked to be a nurse, but she had been bought up in the florists her whole life and both Marcia and Suzie love everything about flowers.

Findlay’s Floriste stocks beautiful fresh flowers, and keeping it within the family, they make all their own deliveries, which are sometimes done by the husbands or kids.

Findlay’s is also the second longest serving member of Inta-Flora Pacific, having been serving them for 50 years this coming September.

The business will also soon be moving out of their Broadway shop for one month, to get an overhaul in the building, including new floors and lighting.

Suzie said apart from that, there will be no other major changes going on.

And even though Marcia is retiring, she will still be around in the shop and helping out.

“Nothings going to change” That’s certainly a worry Suzie! Apparently Suzie’s got a bit of a past too, but hey small country towns and all that gossip, what can you do except listen and learn

Next up: Wendy Bettesworth, designer extraordinair

Lauda Finem,  not unlike the honest and vilified cop, Whiro Ratahi, during the period  1987 -88 have received a few threatening suggestions today. Here’s our message:  for all the bent cop’s and ex-cops in New Zealand. Bring it on arse-holes, come on over, lets see how well your corrupt behaviour is accepted here in Australia!