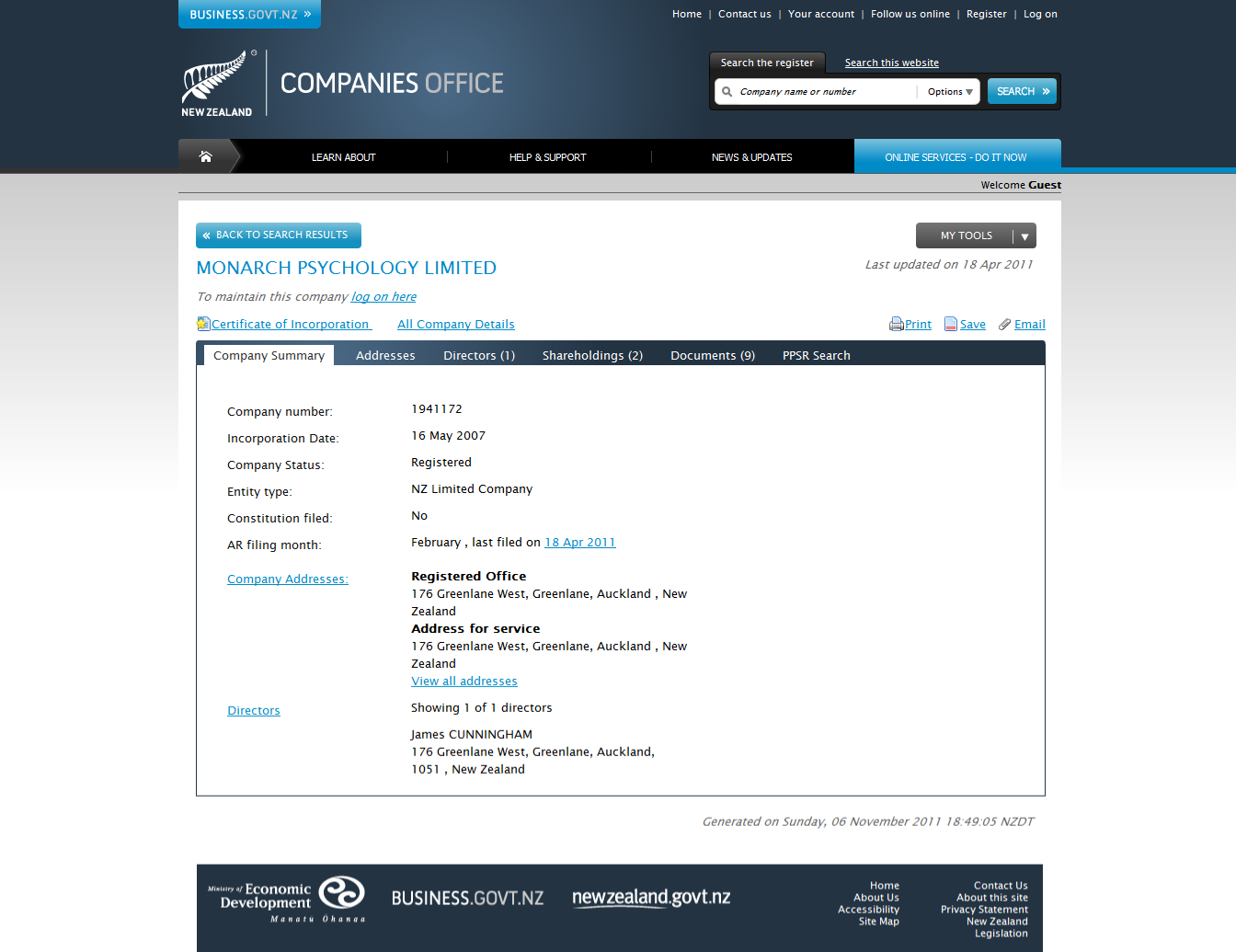 As our readers will know we recently wrote to Monarch using the email addresses supplied by Ange an employee of the business, in fact we believe she may well be Dr Greg Finucane’s personal assistant. We posted that same letter on this site. To date, five days having past, we have yet to receive any response whatsoever – not a peep.

Ange, additionally, advised one of our callers that Monarch had no idea about James Kenneth Cunningham’s nefarious past. She further advised, given that Monarch was now aware, they would be taking steps to remove Cunningham. To date Cunningham and at least one other member of his staff have been quite adamant in their denials that the psychologist James Kenneth Cunningham was once a police officer; the bent and violent cop who in October 1988 was serving and under the tutelage of one Detective Malcolm John Thomas, the ring leader of a Gisborne cabal, all bent; Journalists, solicitors, various local ex-police mates and a rage tag of corrupt cop comrades working in the Gisborne local area command.

What we now find quite extraordinary, given that the evidence is overwhelming and conclusively proves that they are one in the same man, there has been no response whatsoever to the letter. This silence and the ongoing denials by Cunningham himself and his staff are a major concern. Not a peep from the accident compensation corporation either. It would appear that this group is collectively of the belief that in ducking for cover, keeping their heads down and refusing to answer the questions put to them this issue serious matter will somehow miraculously go away.

We know that Ange, with her spurious statements of denial and promised remedy has blatently lied, nothing more than an attempt to throw a little cold water on what is fast becoming an out of control bush fire. 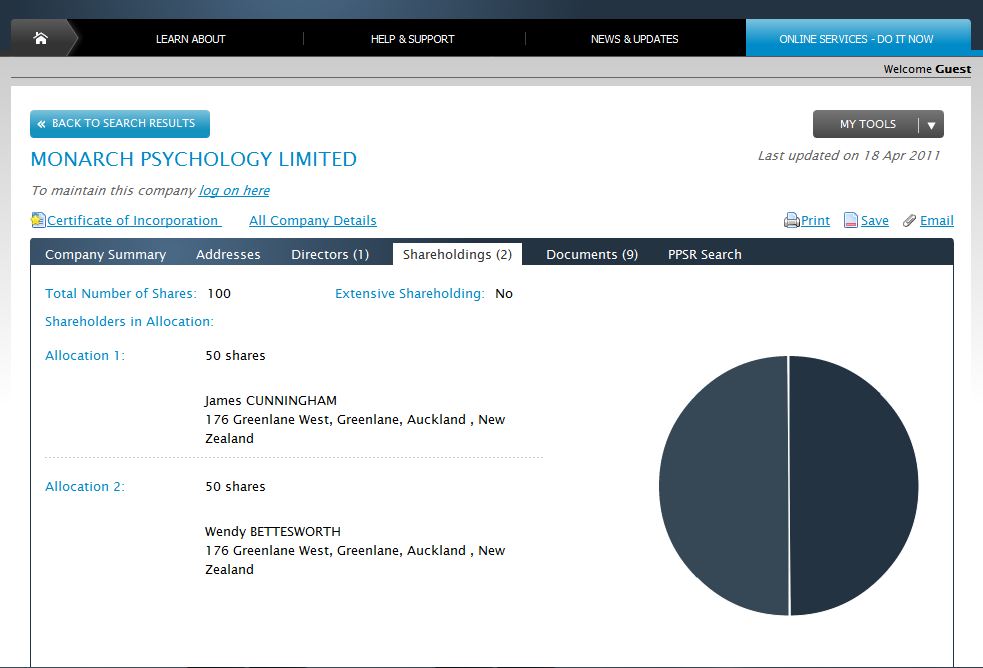 We first found out about Cunningham’s South African wife during our call to Cunningham’s mother Marcia. Wendy, according to Marcia, was 41 years old, quite a bit younger than James.  The couple, again according to Marcia, had not long had their first child, a little boy. Based on the New Zealand companies office extracts we know that Wendy, whilst married to Cunningham, did not take up is Surname, preferring to keep her own; which is understandable given that she had knowledge of Cunningham’s dark past. In situations like that who knows what might have leapt out of the closet to haunt her husband?

Wendy, in addition to her share holding in Monarch Psychological Services Limited, located at 176 Greenlane West, Greenlane, Auckland, New Zealand also operates a small business from the couple’s home in Greylynn. Apparently Wendy loves her charming cottage garden and the chirping birds that visit; which come to think of it, might account for her naming the little design business “Three Sparrows” :

“After 17 years in clothing design; working for well know NZ brands (Max, Bendon, Verge, Anne Geddes) Wendy Bettesworth has started a small design business of her own, while taking care of her infant son. 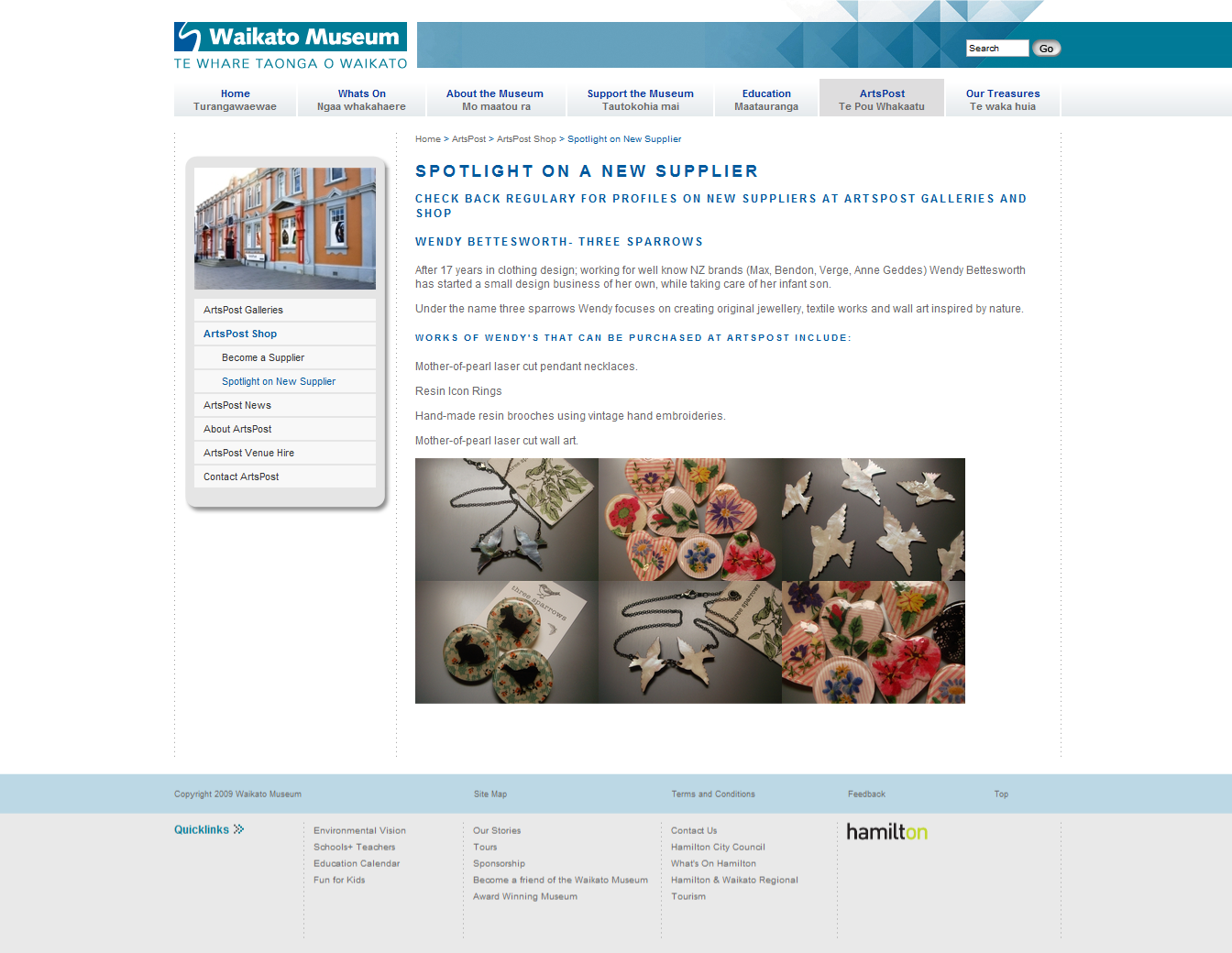 Two birds, one stone – Wendy Bettesworth – James Kenneth Cunningham’s Wife – To be honest we’re not really taken with her work, all a bit kitsch really

What Lauda Finem started out to do was expose a corrupt police force in the 1980’s through 90’s and more specifically the individuals responsible and chronicle the writing of the book. Its now, however, beginning to look like nothing has changed in New Zealand in twenty three years. Is the whole system in New Zealand corrupt?

Next up: Does New Zealand need a Royal Commission of inquiry into police corruption?