BILL RITCHIE CAUGHT ON THE WRONG SIDE OF THE LEDGER

William Alexander Ritchie of 44 Dominion Avenue, Cambridge, New Zealand was made bankrupt on the 15th March 2011, just as he was settling into another liquidators chair courtesy of Brent Clode, aka “clever clog’s”, a fellow bankrupt and aspiring member of the NZ Bankrupt Businessmen’s Association.

The Bank of New Zealand (BNZ) brought down Ritchie over a mere 2.5 Million dollars. Just how much this clown and corporate rapist really owed is up for speculation. We suspect, however, given the many corporate veils through which this dodgy developer and his melodious mates operated it was a lot more.

Ritchie’s appointment as Liquidator of Malcolm Mayer’s Champion Apartments Ltd was as a co-conspirator in a construction to defraud Trustee Executors Ltd (TEL) of the $800’00.00  worth of equity transferred by Malcolm Mayer from his successful frauds on TEL. That mountain of “Moolla” obtained by hydraulicing (illegal practice of jacking up the sale price) the mortgage on the 28 Roberts Road, Ellierslie and selling the property from Mayer to himself. It was not only the Financiers who lost their shirts but the small trade creditors that were ripped off. 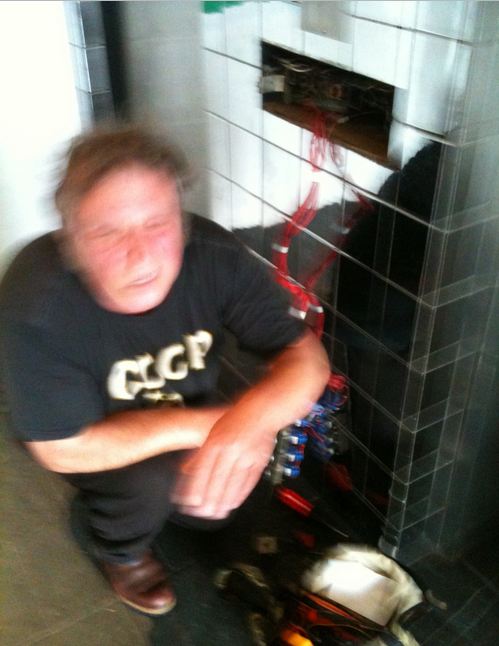 What’s even more amazing was the absolute gall of the these corporate clowns in thinking they were going to steal it straight from under the noses of TEL, the Courts and the Serious fraud office (SFO).

It almost worked with Clode, Gilbertson, Mayer  and Ritchie transferring the property into a now insolvent Eden Holdings 2010 ltd (in Liquidation). They were off and scot-free, so they thought, but for the observance of the real estate Agents responsible for the sell down of the majority of Mayers property portfolio.

Having secured a contract for sale on 45 Mount Eden Road, which was to be turned down by Mayer, the property was transferred into another company,Eden Holdings Ltd, for $100’000.00 less than the aforementioned offer to purchase. The Agents reported their findings to the top brass at TEL and advised them to caveat the property, then provided TEL with the evidence with which to win in Court; albeit on appeal to the Court of Appeal, before a very capable Justice Mark O’Regan.

It doesn’t stop there, we can report that the other Liquidator appointed by Mayer at the same time was one Warren Arthur Wilson, a man who has only ever been the liquidator of a company on one prior occasion, 20 years earlier. whats more Wilson had been in regular contact with the subsequently bankrupted Ritchie.

Wilson recovered not one red cent for the creditors of Sage Corp Ltd (in Liquidation), rather he preferred to set about attacking Lawyers, Real Estate Agents, purchasers and tenants associated with 82 Symonds Street, Auckland. At the end of the day depositing a large sum of “Moolla”, in fact all the dosh that was left into his bank account.

Warren Wilson spent his time making outrageous allegations to governing professional bodies, all in an attempt to promote another bogus offer for the building and secure a ransom for the on sale of two floors in a seven story building. Wilson failed as did Mayer but not before threatening the crown prosecutor with a criminal offence under the company’s Act. Crown prosecutor Ross Burns purchased level 12a Peace Tower from the bank, Westpac, at mortgagee sale and had Mayer and one of his heavies evicted by the police as they were attempting to strip his apartment.

Meanwhile as Wilson was writing a fictional liquidators report in an attempt to exculpate Malcolm Mayer from the frauds which caused the company’s collapse a lawyer by the name of Denholmn  acting for another dodgey contributor was attempting to extort money from purchasers of two other apartments mortgaged to westpack. That man a mysterious developer by the name of Steve Gould had allegedly lent $710’000.00 on the fixtures, light bulbs, floor tiles and toilets of the two properties sold by Westpac.

Those proceedings were never promoted when a complaint was made to Bruce Fox of the SFO by the very same pesky real estate agents.  TEL is still wrapped up in High Court proceedings as we publish this article, defending its caveats over Steve Goulds properties. We here out Lauda Finem tip our hats at the demise of William “Big Bill” Ritchie the irrepressible ex liquidator and man of the people. Watch out folks he will be back!