Australians should be kinder to Kiwis – Former PM; Yeah right who believes anything John Howard has to say? 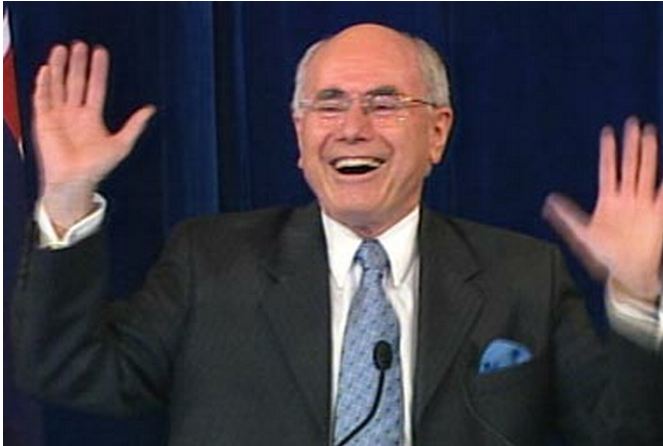 “No More John”, the washed up and electorally disgraced  ex-prime minister of Australia (who should be facing war crimes charges) apparently has a view on how we Australians should all feel for Kiwi’s, as our jobs are shipped off shore to that bastion of mediocrity; New Zealand

Following on from our last post the Australian owned (APN) New Zealand Herald decided to run this story today, where was Fairfax; oh that’s right they were on strike because their Australian HQ had decided to move jobs to a much cheaper third world country; New Zealand:

“Former Australian prime minister John Howard wants his countrymen to be kinder to their Kiwi neighbours.

Mr Howard said too many Australians were condescending to New Zealanders and took for granted the relationship the countries shared.

Mr Howard’s comments come in the same week a New Zealand man is facing charges after he attacked a television employee in New South Wales while in a rage about an advertisement poking fun at the Kiwi accent.

In an address at Britain’s Oxford Union this week, Mr Howard was asked about his working relationship with former Labour prime minister Helen Clark.

“I worked very hard to get our two countries closer together,” AAP reported Mr Howard said.

Mr Howard and Ms Clark led their respective countries for almost an identical amount of time.

Mr Howard, the leader of the Liberal-National coalition, was prime minister from 1996 to 2007, while Ms Clark’s rein started three years later in 1999 and ended in 2008.

“Helen Clark and I were a long way apart philosophically … (but) we worked together very closely and on a number of occasions she was very helpful to me,” Mr Howard said.

“I like John Key, I think he’s a terrific bloke and he’s doing a tremendous job.”

Mr Key was not available for comment this afternoon but a woman in his office said Mr Howard’s words were flattering”.

Not very flattering towards Australians: Lets take a closer look at how John Howard might tend to lie and collude with the very right wing in the world (video below); politico’s like the National Party in New Zealand, the very same men and women that are, in that country, driving down their brother Kiwi’s incomes forcing them to flood into Australia, in search of a better future, in nothing less than record numbers. John Key, New Zealand’s Prime Minister, has termed it the “Suck” effect

No one in Australia listens to John Howard anymore. So what makes the New Zealand press believe otherwise, perhaps its just that they are 10 years behind in reporting current affairs, Given that they are 10 years behind we’d like to remind them why John Howards peculiar idea of what constitutes the truth, and his opinions, are no longer valued or in fact heard by Australians. Remarkably similar to John keys concept of truth really, but we’ll say it again; New Zealand’s only 10 years behind their much older cousin, and as such its a very dangerous place to live and or invest in. Just ask Kim Dotcom: