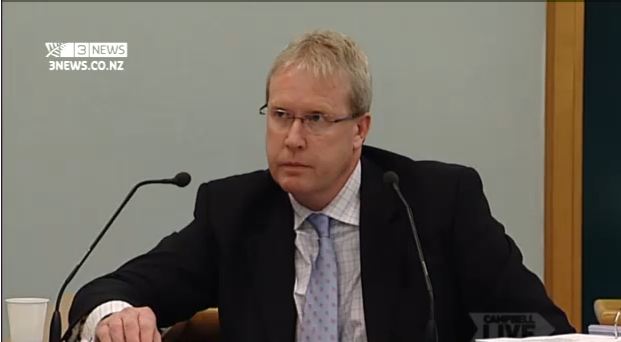 Detective Inspector Grant Wormald (above), the corrupt cop (he lied under oath) behind the Dotcom conspiracy; involved in yet another fraudulent New Zealand police investigation. A case that was today thrown out of court!

Why is it that these pricks can’t do it by the book; is it simply that they are all lazy or is there something far more sinister going on? What ever their motive they are fast eroding public confidence in the judicial process.

Lauda Finem is currently working on yet another contemporary story that will expose New Zealand’s very unusual police force and crown law solicitors for what they really are; CORRUPT.

The story below is but the tip of the ice-berg when it comes to New Zealand’s police and crown solicitors use of whats commonly known, in legal circles, as prosecutorial abuse. Detective Wormald had his dodgey hand in the Peter Ellis case as well but that’s for another post. One of our readers sent in this little cutting from the Christchurch Press:

With regard to allegations levied against Grant
Wormald I cannot remain silent. While a serving
detective in the 90s, I worked with Mr Wormald on
an extremely complex and sensitive homicide case.
The circumstances of the case were unique and
challenging. I found Detective Wormald to be a
man of the highest integrity and an officer dedicated to the truth.

That he would resort to the type of behaviour
alleged with regard to the Dotcom and Red Devils
investigations is as likely to be true as Mr
Mahmoud Ahmadinejad being elected the next Pope,
inconceivable. Defence counsel in this country
have descended of late into the realms of fantasy
and imagination worthy of Disney, and are
overindulged by a media preoccupied by sensation rather than fact.

Seems to us that Mr Peter Newsome may have been the one who “descended….. into the realms of fantasy” when he decided to put pen to paper and wrote to the Press; another member of the CCC gang, Corrupt Christchurch Cops perhaps?

Senior cops such as Wormald, and others like him, need to be prosecuted and given long prison terms so as to send the clear message that this illegal and prejudicial behaviour will  NOT be tolerated (Psst; where’s the NZPA”S Greg O’Connor). At last it appears that some judges might just be cottoning on:

A judge has thrown out charges against 21 people associated with a Nelson motorbike gang after it was discovered police had faked the prosecution of one of its undercover officers to boost his street cred.

In a High Court decision released today, Justice Simon France ordered a stay of proceedings against the group who were facing a range of charges including drug offences and being part of an organised criminal group.

Police were investigating the emerging Red Devils Motorcycle Club, they suspected were about to become a chapter of the Hells Angels gang.

During their crackdown on the gang members, dubbed Operation Explorer, police bosses became concerned that one of their undercover officers, known in the gang as Michael Wiremu Wilson, was about to be exposed.

As part of a strategy to strengthen “Wilson’s” credibility in the gang, police arranged for a fake search warrant of his lock up in which they had placed apparently stolen equipment and drug paraphernalia.

Police forged an illegible signature of a Deputy Registrar and arrested Wilson.

Wilson appeared before judges on several occasions, who all believed they were dealing with a genuine case.

Detective Superintendent Rod Drew Detective Senior Sergeant Warren Olsson visited the then Chief District Court Judge, Russell Johnston, and believed they had his permission to go through with the unprecedented ruse.

It was anticipated that Wilson would plead guilty to the charge, however, club members employed a defence lawyer, who advised against the early plea.

Soon after Operation Explorer ended, and the club members charged, police sought to have the charges withdrawn.

Justice France said he believed police thought they were acting legitimately, but he said a letter police gave to Judge Johnston about the situation would have been “wholly inadequate” to alert him to the realities of what was involved.

Justice France said he was surprised at the police’s “lack of insight” in creating a fake search warrant.

“However one looks at it, a fraud is being committed on the courts. The judges who are dealing with it are being treated in a disrespectful way.

“Their time is being taken up on a fiction,” he said.

“It is no function of this court to facilitate a police investigation by lending its processes to the false creation of street credibility.”

There was fundamental and serious abuse of the court’s processes by the police, he said.

The charges faced by the group were serious, but none involved violence, and police failed to put that into perspective, Justice France said.

Police said they were studying today’s decision and would be taking advice and considering options.

Police Minister Anne Tolley said she maintained her confidence in the police.

“Those guys are out there everyday doing their very best to keep the community safe from thugs.”

She would not comment on Mr Wormald’s involvement in the operation or the decision by Ofcanz to attempt the fake prosecution.

“It’s very difficult for me to comment on a court judgement, what I do know is police do everything they can to try to bring some of these criminals to justice and they will continued to do so.”

She said she was disappointed the 21 gang members would not be brought to justice.

“I’m sure the police are just as disappointed.”

Ms Tolley also said it was difficult for her to comment on police operational issues.

“They make those decisions at arms length from politicians and that’s the right place.”