New Zealand Police: “they are certainly not white-washed”?

The New Zealand Heralds David Fisher has today published two very good articles on the Arthur Allan Thomas case and the impact it has had on Thomas’s extended family and their subsequent battle for justice:

Mr Fishers articles appear to reflect the argument and sentiments that we advanced in one of our posts in July  The Arthur Alan Thomas effect – trust in police integrity forever gone! he, however, unfortunately appears to put himself in the role of an apologist for police, at least towards the end of  his second piece “A brothers crusade”. In particular what caught our eye was the fact that Fisher had obviously contacted the now Retired Detective Chief  Inspector Rex Miller (the handsome man in the above photograph) and on the subject of the public’s confidence in the police:

He’s right – the figure has climbed since polling was instituted.

It doesn’t reflect the belief the public have less faith in the police than in the past, which retired detective chief inspector Rex Miller, a veteran of 37 years – with no connection to the Crewe murder case [true, but he does have a connection to several other very interesting cases] – puts down to changes in society rather than police. [we agree with the chief inspectors observation on the changes in society]

“I think police are still held in pretty good regard. The ones who are anti (police) are usually the ones who have done something wrong.”

Miller says that, contrary to what some people might suggest, there is no tolerance in the force for bad behaviour, rule-breaking or malfeasance. If there is wrongdoing, it will be examined and rooted out if it can be.

“I did internal inquiries for years. They are more severe on their own staff,” he says. “They are certainly not white-washed. People think you look after your mates but you have to do it properly. There is no sweeping under the carpet.”

Miller had an early brush with the case involving allegations made by Louise Nicholas. His testimony years later in 2007 helped convict former Rotorua CIB chief John Dewar on four charges of attempting to obstruct or defeat the course of justice.

Police handled 130,000 prosecutions last year. Even the lowest of error rates will still make headlines. The media, too, have a role in the perception of the police, says Miller. “Good news stories don’t sell newspapers.”

Millers extraordinary comment “The ones who are anti (police) are usually the ones who have done something wrong.” is nothing short of deluded.

For the past ten years there has been exponential growth in the number of websites and blogs, this one included, that have taken an online anti police stance, mainly in the material they post evidencing police corruption, misfeasance and incompetence.  The men and women behind these sites have not “done something wrong”.

Whats more, one could ask the question, have critics such as ex-police officer Ross Meurant “done something wrong”  which might have coursed them to form views such as;

“They [police] will avoid at all costs having to account for their actions before a court of law. They’ll put the preservation of themselves above the rule of law.

“The probability of the state being called to account for this shocking behaviour is zero.”

“When police shoot someone, such as the negligent shooting (shot the wrong guy by mistake) of Tongan courier driver Halatau Naitoko, and the amazing fusillade of police lead thrown at Hawke’s Bay man Lachlan Kelly-Tumarae (this later case is, in my opinion as a former police inspector and university educated former MP, falls outside the lawful justification – Section 48 of the Crimes Act – for police to kill someone) then questions must be asked.

But when the  IPCA says “no case to answer” then we, as citizens of this bastion of democratic and legal principles, are in serious trouble.”

“To appoint a police officer’s wife as a judge shows an alarming lack of judgment by the Minister of Justice.”

David Fisher really needs to take a closer look at the retired Chief Inspector Miller, especially some of the investigations he may have carried out in Gisborne during the late 1980’s and then of course there is the work he undertook whilst with the IPCA.

We know of at least one complaint of serious police misconduct and misfeasance being knocked back with the explanation that the matter was to old to be investigated. That was despite the IPCA having been given an Audio tape which irrefutably evidenced the fact that a police officer had lied in his statements and police reports. That same systemically corrupt Gisborne cop, Detective Malcolm John Thomas, then went on to plant evidence in a well know rape case.

Lets look at some of the sites, in addition to Lauda Finem, that could fall into Chief Inspector Millers “anti police” category:

If we had all day we could fill many pages with the URL’s of so-called “Anti police” sites, but we don’t; and think that we’ve adequately made our point.

The people behind these sites have not done anything wrong, that’s the whole point. In fact they are often the ones who have been seriously wronged by bent cops and whats more they appear to evidence it – the absence of legal proceedings to shut the sites down is also another key indicator.

One site that we visited had a quote that, we feel, sums up perfectly the way in which the New Zealand police continue to deal with corruption and misfeasance in their ranks, the Thomas case included, and unfortunately neither honesty nor transparency has anything whatsoever to do with it, history is indeed an interesting subject, especially New Zealand’s more recent history;

“It is not necessary to bury the truth. It is sufficient merely
to delay it until nobody cares.” ~ Napoléon Bonaparte 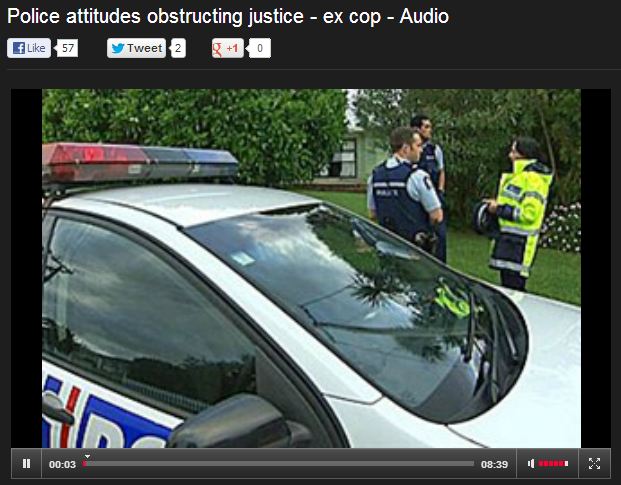