Years ago Lauda did a story on Paul’s involvement in attempting to falsely accuse a man and his family of multiple rapes, murders, and being involved in multi million dollar fraud’s.   We told the story using accurate contemporaneous records and when Paul discovered the numerous stories he went beserk like Jake “the muss” Heka did when he beat up his caring and loving wife Beth.

Paul then decided to get up to his old tricks of intimidation, lying, defaming, and threatening.  His favourite target was, of course, defenceless women.  Apparently Paul models his behavioural patterns on his fictitious hero “jake the muss” from the movie “Once were Warriors”. 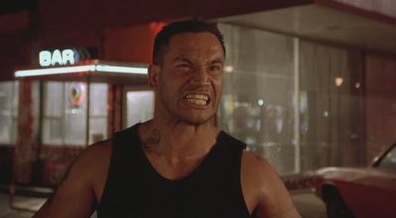 “Hi is xxxx there, xxxxxxxxxx listen you fucking whore, cunt, slut, bitch;  my hammer is coming down on you very fucking soon and you can tell xxxxxxxx he won’t be able to stop me………[creepy laughing]…..you don’t know who this is do you whore….cunt..slut…”

Like “Jake the Muss”, Paul is not the sharpest tool, and made numerous criminally harassing calls from his employers telephones, email facilities and sent TXTs during work hours stating amongst other things that he was “going to bring the hammer down”;

xxxxxx xxxxxx xxxxxxxxxx you are a complete and utter fuckwit of the highest order, as is your xxxxxxx xxxxx weasel and xxxxxxxxx xxxx faggot along with  xxxxxxxxx xxxxxxxxx and also not forgetting your slutty girl xxxxxxx. you name everybody in your article as bent and that they have conspired against you when infact you are the bent one dickhead. Beware cuntface the hammer is about to come down and you’re going to get crushed like the fat maggot that you are, and thats from all of us at ACC, IRD and your old mates in the police force we are watching and waiting for that right moment thats coming soon. Pull your fat fuckedup head in cunt or else.

According to our sources Paul had large posters in his home of scenes from the the movie “Once were Warriors“. Our researcher, who recently visited Ruatoria, was told by locals that Martens favourite joke when bragging of having just given his partner a “hiding” was that he used the expression “applying make up”.  Martens was infamous for plying underage girls with alcohol and drugs and then having sex with them in the pub where he stole alcohol and cigarettes.

Martens old “Stomping” ground the Ruatoria Hotel. Looks like it could do with a bit more than a hammer

Apparently dozens of young girls were victims of Martens depravity at Martens Ruatoria Gin Place “workplace”. On occasion Paul got emotionally involved with the odd teen (we say “odd” teen because who would want to stay involved with a guy that date rapes customers of a hotel; but of course drug and alcohol dependency makes such things inevitable). Paul would take the “lucky ones” to his residence, which he operated as a virtual “tinny house”. 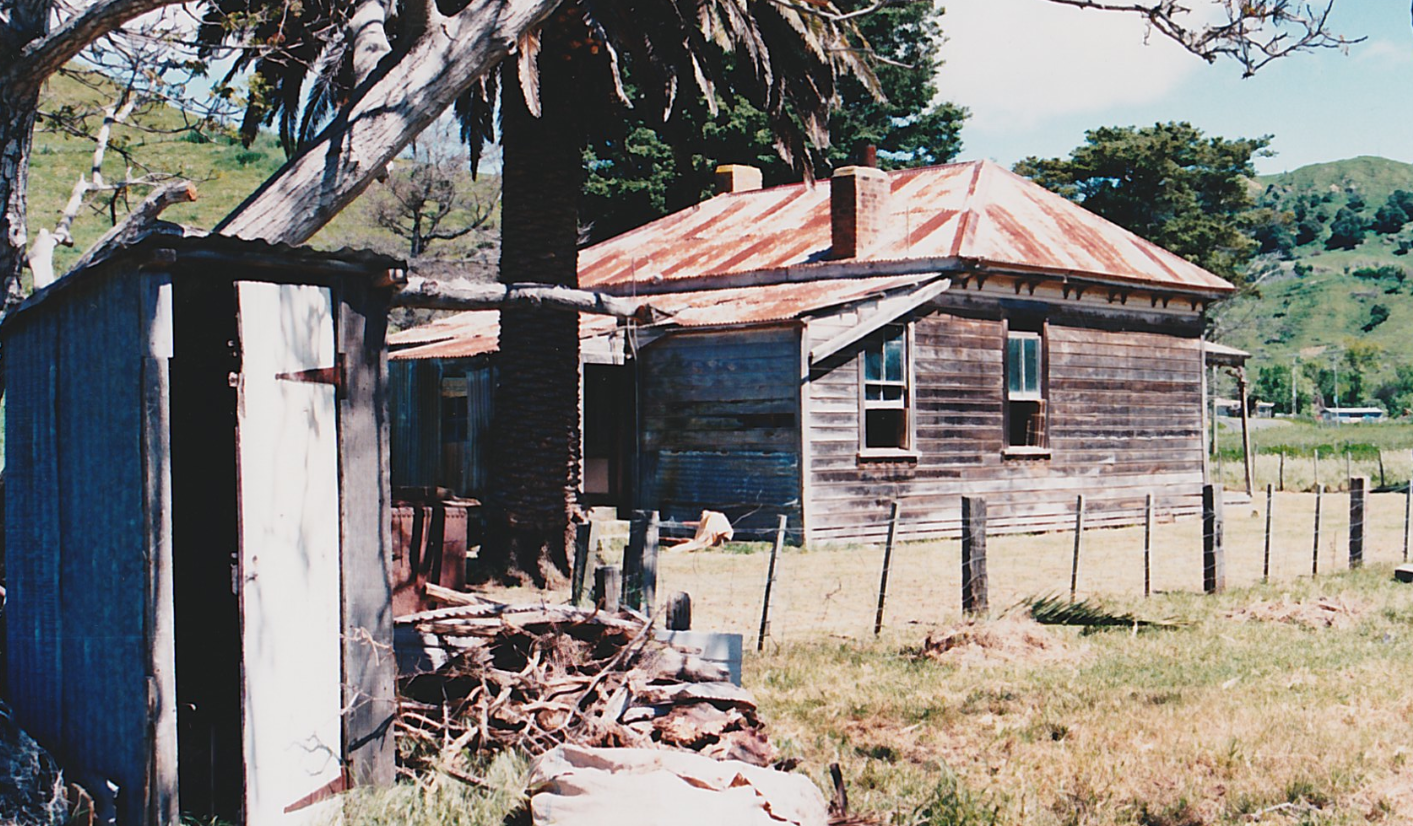 Life has not been kind to Paul, and Paul likes to take out this spectacular success at failure on any women foolish enough to be in his vicinity and prone to dependency on alcohol and drugs; his favorite aphrodisiacs.

But Paul, like all sexual predators, got nailed, and we mean nailed.   Following our story “Paul “Hard-Man” Martens; Criminal Harasser, homophobe and White “Mouldy” now employed by New Zealand charitable trust- Enrich +” Mr Martens employment went under review by the Trusts CEO Wendy Becker, and the violent and useless cunt was sacked from his $65k a year job. 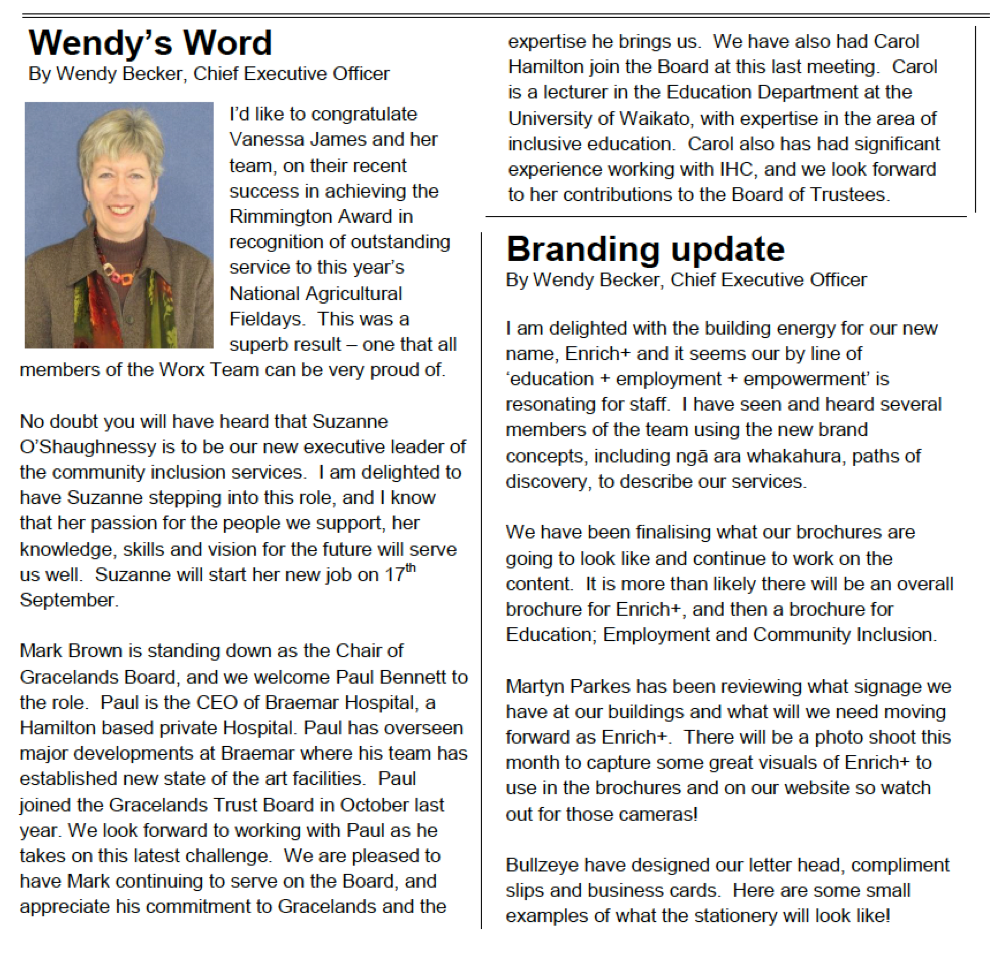 Wendy sent the following letter to the victim of Martens Criminal Harassment asking the victim to assist with the alteration of Lauda Finem’s original story because it made “unflattering remarks towards Enrich and Mr Saen O’Brien“, perhaps Wendy should have emailed the Team @ Lauda Finem? That would have made far more sense than pleading with the victim of a crime? A victim that had, prior to our post, been stonewalled? (Parts of the “Enrich +” letter have been redacted so as to maintain the victims privacy): 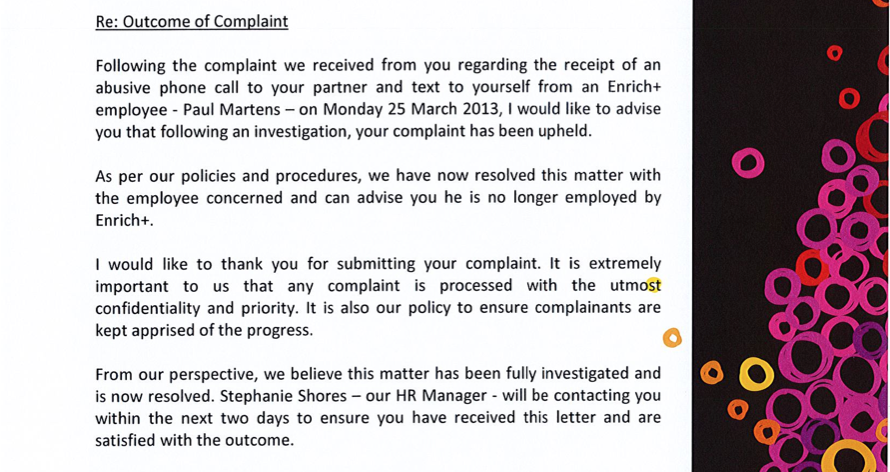 Now we have considered Wendy’s request that we address our previous position on Saens conduct.

However, Saen’s conduct, which was digitally recorded, speaks for itself, as did the conduct of Paul Martens.

Saen is clearly aggressive in responding to the complaint contained in the call he received from the male victim, and tries to control and manipulate the complainant and excuse Mr Marten’s criminal behaviour.    Saens tone is belittling of a complaint that led to Saens subordinate being sacked for criminal harassment of a female, who Martens referred to as a “fucking whore”, “cunt”, “slut” and “bitch” and threatened to physically harm her family with a hammer.

We note Wendys decision to sack Martens, (which we applaud with the qualifier that she had no choice due to our stories accuracy), but we notice, with considerable dismay, that while Wendy does apologise for the stress caused by one of her employees being the criminal harasser Paul Martens, she does not see fit to issue an apology for O’Briens behaviour. 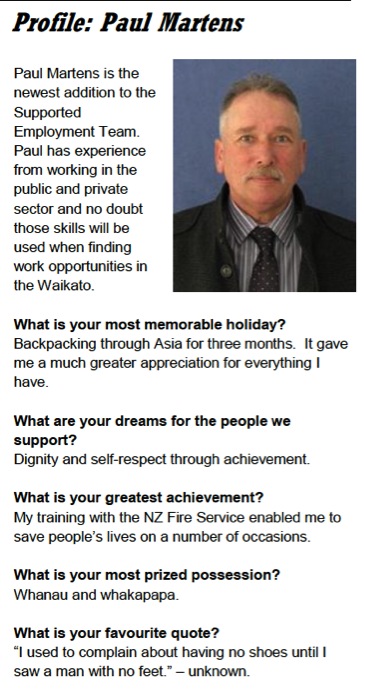 Profile of a serial killer – look at the eyes, it’s all in the eyes; glazed psychosis.

Backpacking through Asia, and liking a quote about being better off than someone with no feet. What the fuck has this psycho achieved; except creating misery and mayhem wherever he visits.   He probably left a trail of dead bodies all over Asia with their heads stoved-in by a Hammer, and their feet being cut off. That’s how Martens probably got his “kicks”.

Martens grandiose concepts about his innate ability to “save lives” and “make a difference” against the reality which is that he is an unemployed and now unemployable nobody who is doomed to continue on his downhill slide which has been his lifes work so far.  We hope Martens gets to a cliff real soon and puts all of us out of his miserable existence.

Enrich Plus must apologise for the behaviour of O’Brien.  We accept that O’Brien’s it is on a lesser scale, but was nevertheless not acceptable behaviour for any professional organization that has the alleged message that Enrich Plus has.  O’Brien must apologise to Martens victims and must do so in writing.

We have been given a recording of what O’Brien’s personal assistant  XXXX stated to one of Martens victims about O’Brien’s initial reaction to hearing of, and then being told about the complaint via email.

“Oh that sounds terrible….I just don’t want to get into trouble again.

What trouble…..look I need to know what’s happening as my partner is really scared of Martens and I want to stop this before he carries out his threats with a hammer.

I know. Its just that I got into a lot of trouble telling you that Paul worked here, Saen was really angry, and told me never to do it again, and if I do anything more to help, I know that I will be………”

We had to think three times before releasing this before Martens was sacked, but now that Martens has been sacked, and Enrich Plus has been identified as an employer that does not do sufficient backgrounds checks to cull out criminals and psychos like Martens, we believe that the time is right.

To Ms Becker and to the Board of Enrich Plus we say this, and we will only say it once.  The initial response to a very serious complaint of criminal harassment and threatening behaviour against Paul Martens by Saen O’Brien was abysmal and bordering on being openly supportive of such behaviour if it was not in company hours.

The threats by O’Brien against the female personal assistant, which we assume were in the same intimidatory tone when addressing the victims initial telephone complaint, were absolutely disgraceful and it smacks that there is misogynist ideology being practiced inside the middle management of Enrich Plus.

This must be stamped out immediately and the first acts must be that Mr O’Brien must explain his “disciplining” of the PA when the PA was assisting a victim of criminal harassment identify the culprit inside Enrich Plus’s ranks, and his obfuscatory and recalcitrant ramblings when trying to dissuade they victim from making a complaint.   The minimum acceptable standard is a full and unequivocal apology to the PA and the victims of Paul Martens criminal harassment.

We will keep our readership up to date as this story progresses.  Of course should the appropriate apologies not be forthcoming we will address the matters of the apologies to the board who are currently the following persons.

Associate of the Chartered Insurance Institute,

As a member of the Institute of Directors Committee I have an ongoing interest and activism in governance.  Having served as Chair of School and Not for Profit organisations, I also have the honour of gaining a one year placement on the board of Hamilton Airport through the Aspiring Directors Award.  My day to day role at Crombie Lockwood provides a great foundation on which to provide good governance given I am in the risk business.

Fifteen plus years of Board experience, serving on a range of Boards. I bring knowledge and relationships in local and national business and a passion to empower potential in people.

I have developed my professional career in the disability and community development sector, with a strong emphasis on human rights for people with intellectual disabilities. Over the last 30 years of my career I have had key management roles in the closure of government funded institutions, working closely with consumers and their families from a person centred premise and practice.  I bring to the Board of Trustees a demonstrated reputation in the health and disability sector for developing key strategic relationships and taking lead roles in organizational improvement.

Member of the New Zealand Institute of Chartered Accountants

I joined the Board of Trustees in October 2009. As a chartered accountant with 40 years experience and also a Te Awamutu resident, I was keen to bring my business skills to Enrich+ (formerly Gracelands).  It is an organisation I hold very highly and I felt that I could learn from the staff and clients of Enrich+.  I enjoy attending board meetings, listening to what is happening within the organisation and finding ways to make a difference.

Now lets all listen to some very early material from New Zealand’s most famous journo “Jenni McManus” on the subject of Mr Paul Martens and his association with police corruption: