The image of ACC fraud, Bruce Van Essen, as profiled by Google, and to come – the next ACCForum nutjobs to be profiled.

Without any help from LF the internet search engine giant Google has listed Bruce Van Essen aka “Huggy” of New Zealands hate site www.accforum.org and www.acclaimotago.org, as the visual personification of ACC Fraud.  Bruce Van Essen has now had his fifteen minutes of fame – but not as he intended it.  For Van Essen, his court loss was an Autumn event in his miserable deceit filled existence in shithole Fairfield.

LF will bring our burgeoning readership certain aspects of High Court Judge Whata’s findings, whilst Van Essens right not to face unreasonable search and seizure were breached, that the private investigators had sufficient evidence to prove that Van Essen had not been declaring income received whilst on ACC compensation.

For Bruce “the goose” Van Essen, the winter of his life will be spent being seen by his countrymen [and neighbours] as the image of ACC fraud.  In fact some neighbours have offered to help LF nail this scumbag in his own backyard.  Apparently the neighbours don’t know Bruce Van Essen, but have been motivated by our story to “frame the fraudster”. 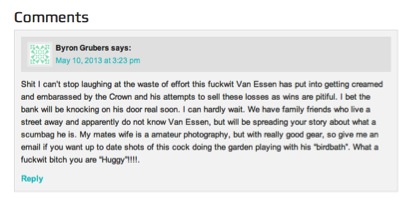 We say to Bruce, who was big on the threats when we outed this sad sack of cow shit as a lying toady, that we were very much aware of how Justice Christian Whata was going to clobber him, and we were “word perfect”.

Bruce, we say to you that your words and threats don’t match your “lifestyle and abilities”.  That is why you use a “moniker” on New Zealand’s most infamous hate site www.accforum.org.

A follow up story on Bruce Van Essen’s incredible stupidity in taking on the New Zealand Crown, when the only likely outcome was that he would be identified as an ACC fraudster would result, will follow over the next few days.

We leave our readers by quoting none other than Bruce Van Essen himself when he recently posted on www.accforum.org:

“Hmmmm isnt it amazing how information gets out there.”