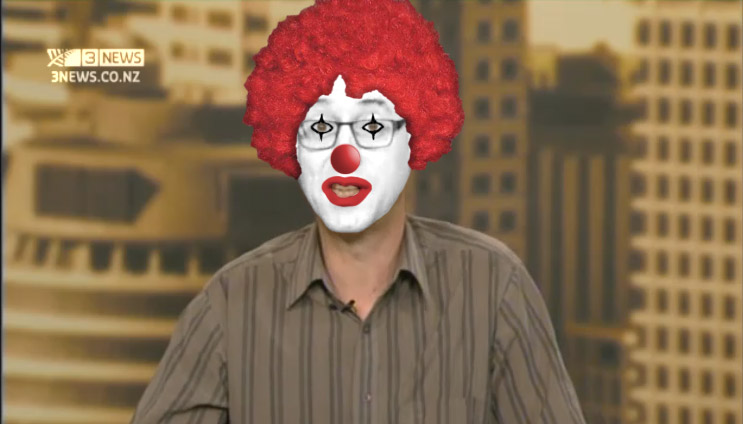 The Slater Case: The Circus is in town & the politically motivated clowns have joined.

Centre ring; Media legal Eagle and TV3’s resident Clown Steven Price – Another interview with yet another, again modified, version of his media circus legal opinion/s. Third time lucky, but did he get it right? We here at LF think not!

Team LF have sat back after writing a couple of pieces on the Matthew Blomfield vs Cameron Slater defamation case and what was in our opinion District Court Judge Blackie’s  Ultra Vires ruling.

It would seem however that the New Zealand medias favourite go-to-boy, who has altered his opinion so many times in this case that it has been hard to keep track, still can not spot the Circus Elephant in the tent; probably because he himself is in the judicial tent so to speak.

Whats more it would seem that almost every leftist blogger, all of whom are so fixated in their hatred of Slater that they have been blinded to the bleeding obvious, are either following Price and his shifting sand legal opinion or they have lost their faculties and any ability that they might once have possessed to apply critical thinking to an issue that is much larger than just the potential demise of Cameron Slater.

The first version of Prices “Qaulified” legal opinion  appeared in a New Zealand Herald piece that broke this story, although the Herald has subsequently ultered the piece; probably at Price’s request. As with most of the crap that appears in the ‘Herald On Sunday’ it was obviously designed as a hatchet job on Slater (following a piece in the NZH, only three days earlier, declaring Slaters blog ‘Whale Oil” number one) and as such one could be forgiven for suspecting that the journo responsible, Bevan Hurley, had been very selective in his reporting of what Price had actually said.

This is arguably further evidenced by the fact that Price himself had the sudden urge to post his own piece, the same day, explaining in more detail what it was he had actually meant.

Price’s blog post was not however sufficient to exculpate him as he still managed to avoid the “Elephant in the tent”. Even when Price allowed himself to be interviewed by TV3’s Morning program he continued to ignore the Elephant, as have leftist bloggers such as Martyn Bradbury (The Daily Blog) and Lynn Prentice (The Standard).

Prentice in the wee hours (NZDST) of this morning posted a piece that exemplifies the lefts hatred of Slater, their ignorance of the law (plain english and how it should be read) and the 101 reasons why readers should take with more than a grain of salt anything these idiots proffer as fact or argument. Prentice, obviously a shade of green, opines:

Cameron Slater simply isn’t a journalists arsewipe. For him to claim the legal privileges, protections and authority that the journalistic profession holds within our political and economic community makes a travesty of the whole concept of a free and responsible press.

Read more: “I think Justice Blackie got it right”

Well we here at LF think that Lynn Prentice is a complete and utter Fucktard if he genuinely believes Blackie DCJ “got it right” (we suspect however that Prentice is more likely a Cuterebra Parasite). The first indicator of the fact that this particular parasitic clown, who’s now joined the circus, might just be following the obviously confused ‘Media Darling’ Steven Price is to be found in Prentice’s choice of title for his post. The promotion that he unwittingly afforded District Court Judge Blackie, that of “Justice”, stood out like balls on a short haired dog.

Blackie is not a “Justice”, he never was and never will be, he’s merely a DCJ, although it would seem that Prentice was oblivious to the distinction between the two judicial offices. We note that he has subsequently altered the post’s title, replacing ‘Justice’ with ‘Judge’ but that was never going to be enough to conceal Prentices complete ignorance of the law, as is to be found in his posts comments section at (16.1) 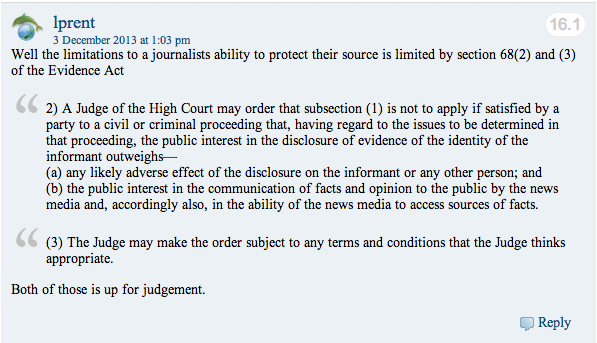 Note that Prentice has missed a critical piece in this media circus driven jigsaw; its the very same ineptitude that has repeatedly been displayed by Steven Price, both in his blog piece and the many subsequent media appearances he’s made. Lets start first with his blog post –  “Is Whale Oil a journalist?”

“Second, even if he is a journalist, that doesn’t guarantee that he won’t be ordered to reveal his source(s). The judge can order him to identify his source on the grounds that the public interest in disclosure outweighs the negative impact on the source and the general impact on the flow of information to journalists. This rule applies to all journalists.”

Again during Prices interview on New Zealands TV3 he makes what we would argue is a similar misrepresentation:

“But umm there are a couple of qualifications to that. One is that the judge, even with a journalist, can order a journalist to turn over a source, so even if he can show that he is a journalist and publishing on a news medium the judge could still order him to turn it over.”

Now this is where it becomes very important to remember that the Judge, Charles Blackie, is merely a District Court Judge and not a “Justice” of New Zealands High Court. Both Prentice and Price have constantly misrepresented the fact that it was always, as an alternative, within the Judges power to apply Section 68, subsection (2) of the Evidence Act 2006 and order Cameron Slater to hand over his source. Clearly this opinion is little more than horse shit.

The Act that these two clowns repeatedly cite, in support of their respective opinions, specifically precludes Blackie DCJ from making the ruling on Slaters status so as to order Slater to disclose his source. The Act specifically states, in plain English that this particular power, for very good reason, is only ever available to a High Court Justice: