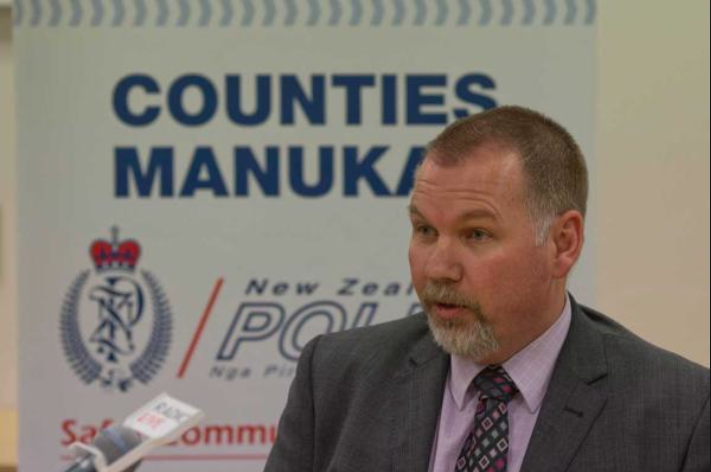 The mainstream media (MSM) are at it again – believing that they alone are the arbiters of who gets to know what and when!  They, the MSM, as a block, have yet again arbitrarily decided to withhold the identity of another senior New Zealand police officer who has been accused of serious criminal sexual offences. Frankly that arrogant stance pisses most people off; including the arseholes own devoted readerships.

The New Zealand police constantly use the main stream media to push their own perverted agenda and in this case whats looks to be shaping up as another attempt by police to manufacture one of their infamous whitewash investigations.

We doubt very much that particularly titilating piece of information, if accurate, came from anywhere other than the police. The poor womans alleged occupation was undoubtedly supplied to the media by some nasty piece of work spin-doctor within the PNHQ’s media liaison office.

Given that prostitution is not a crime in New Zealand the polices motivation in releasing that irrelevant detail was clearly designed to start damaging the womans credibility and that of her complaint in the eyes of an already distrustful New Zealand public; using an age old police strategy of smear and innuendo drawn from their own outdated perception of where “public morality” is at.

SERIOUS COMPLAINT AGAINST AUCKLAND POLICE OFFICER
Detectives from National Police Headquarters are investigating a serious sexual complaint against a south Auckland police officer.3 News has decided not to name the officer as the investigation hasn’t been completed and no charges have been laid.It is understood the complaint was made by an Auckland prostitute and that detectives from Wellington, including officers from Police National Headquarters, are investigating the claims.Shannon Parker, who’s behind an anti-police corruption lobby group, helped the woman make the formal complaint.“She just wanted our advice on what to do and in July we assisted her in drafting a letter to Peter Marshall, the Police Commissioner,” says Ms Parker.
Police won’t confirm those details, but did release a statement saying: “We can confirm that a complaint has been received regarding a Counties Manukau District police officer. The matter is currently the subject of an investigation and police are unable to comment further at this time.”Ms Parker says the complaint is sexual in nature.The officer is also understood to be under scrutiny for inappropriately using the police computer database or National Intelligence Application to get information on the complainant.Although police wouldn’t confirm it, 3 News understands the officer is still on duty and at work despite the investigation.No charges have been laid against him, and the internal investigation is expected to be complete within the next two weeks.

The New Zealand Police and the MSM have concealed information that is in the public interest for more reasons than the bullshit excuses they’ve employed:

“3 News has decided not to name the officer as the investigation hasn’t been completed and no charges have been laid.”

Then of course there was Fairfax NZ ‘s quite different version:

“The man, who cannot be named for legal reasons, is still serving but over the last few months a team of investigators from Wellington have interviewed him, the woman making the allegation and others.”

These bullshit excuses have never stopped the cops or the MSM in the past from naming individuals who were only ever under investigation or preliminary suspects, especially in the case of Detective Mark Gutry: 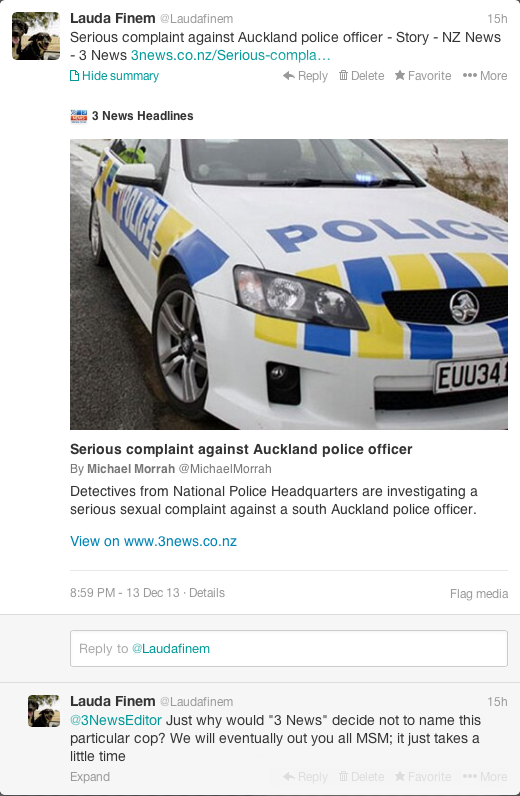 The truth, LF believes, is far more sinister. The accused cop, Detective Inspector Mark Gutry, and his crack (addled) police charges have also been in trouble recently with the bungled search of an innocent family’s home that turned out to be the wrong house.

Then of course there is the fact that Detective inspector Mark Gutry oversaw:

“The adult and child sexual abuse units at the time of investigations into what happened to pupils at Waimokoia School. Now Counties Manukau Police’s field crime manager, Mr Gutry was then in charge of the 20 full-time investigators in the child abuse unit, as well as the 14 in the adult sexual assault team”

When the public are made aware of these facts then it becomes a little more obvious why NZ police head quarters wanted Detective inspector Mark Gutry‘s identity concealed by an, as always, obliging MSM.

Whats even worse is the fact that the MSM would have equally been aware of Gutry’s role in investigating past sexual offence cases and just how that might now start to look for the New Zealand police and the integrity of those particular investigations.

Lets start with a 2010 TVNZ story where detective inspector Mark Gutry names a certain “Daren Thomas Court, a 43 year old male who is wanted for questioning in connection with unrelated matters”. 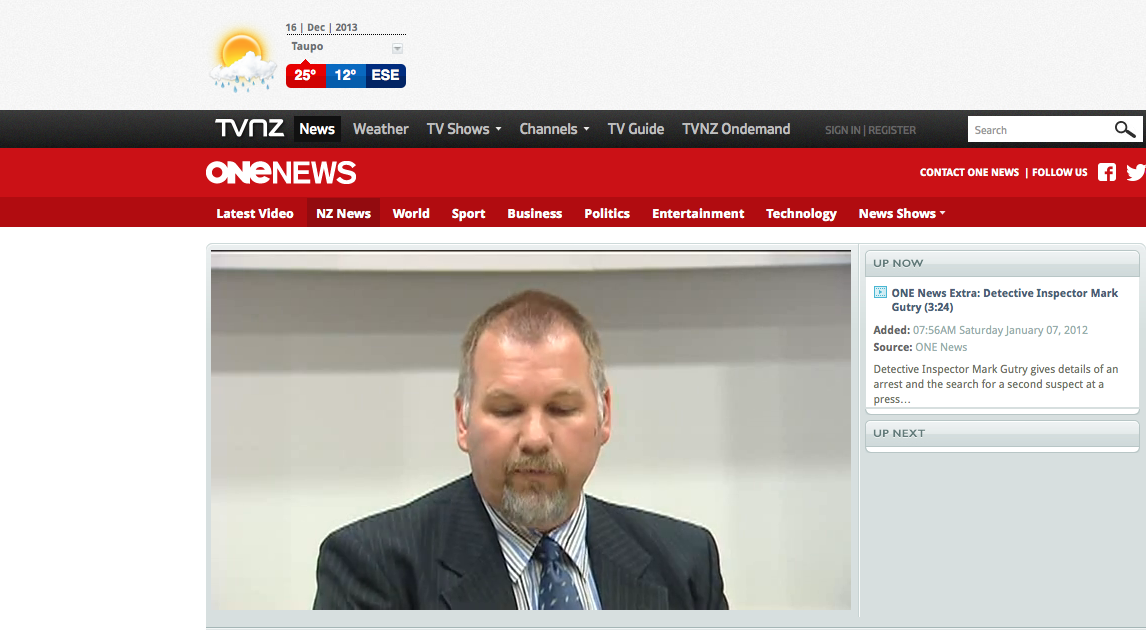 So much for the MSM’s role in ‘research’ and delivering news, without fear or favour, that SHOULD be in the public domain!

After all the MSM have recently been quite happy to name a few fellow police professionals, such as ambulance driver, Christopher Roger King; as have the NZ police themselves, somewhat hypocritically, on their very own website: 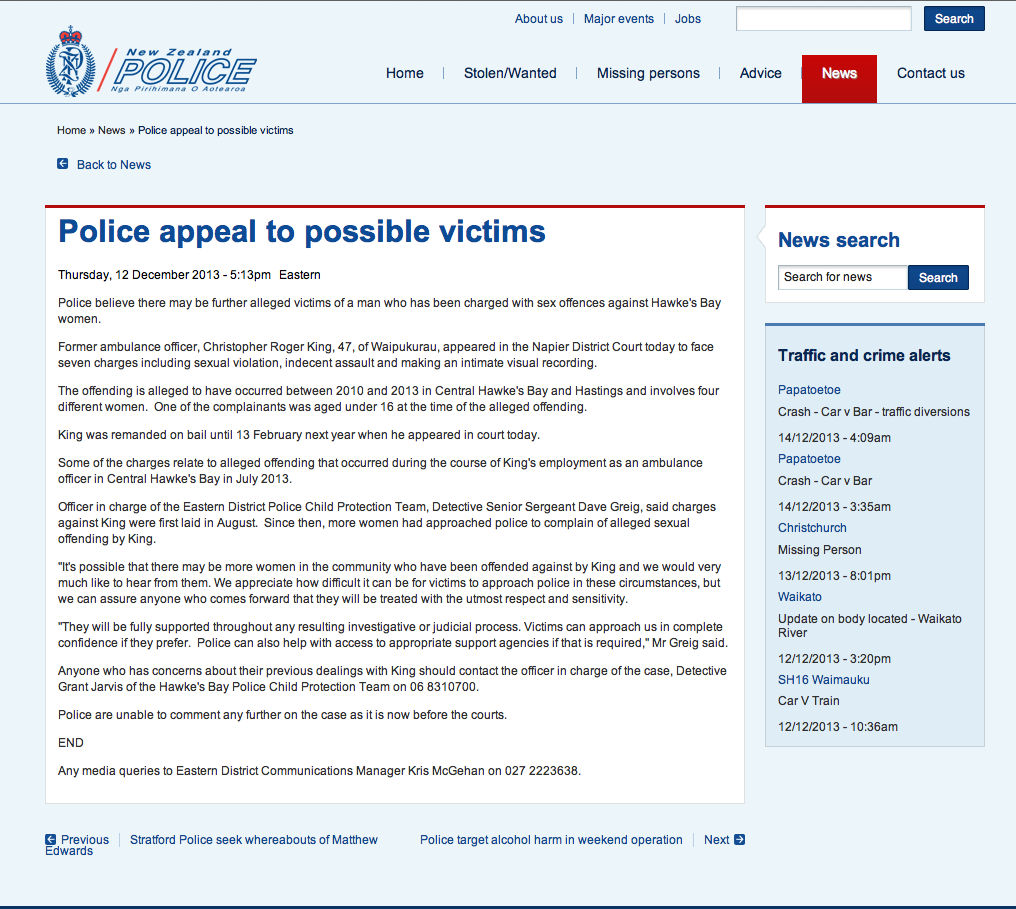 But again it was a very different story when it came to another recently convicted cop. Police in that case kept the offending concealed for six years, until Senior Constable Gordon Stanley Meyer was in fact convicted, before making their heavily MSM  “spin doctored public” appeal for any other victims to come forward – two very different spin-doctored standards; one for NZ Police officers and another for everyone else:

Right background: another prostitute loving ‘Silver fox’ cop and sexual predator creep Senior Constable Gordon Stanley Meyer – is it a generational creep problem with the NZ police force, or is there something else at play? Who can really trust the NZ police to tell the whole truth?

Prostitutes claim cop made them flash

Anyone with any concerns about police conduct or who may need assistance with making a complaint against the New Zealand police can of course contact Shannon Parker at the email address:  help@nzpca.co.nz

We here at www.laudafinem.org, and apparently now Ross Meurant (himself a retired police officer and past member of parliament) support Shannon Parker and her groups great work in New Zealand in having established the website www.nzpca.co.nz this year 2013.

We here at LF strongly believe that when it comes to fighting for justice (or more often than not against the profanity of injustice) and changes to a corrupt or incompetent police force and a country’s judicial system the mainstream media cannot be relied on to bring about that change.

After all those behind the MSM, no matter the location, are very often part of the problem; what with so many vested and concealed interests, as we have all seen in the United Kingdom with the ongoing Rebbecca Brooks trial.

It will only be when ‘bloggers’, despite their often competing stories and agendas, UNITE that they will,  as a COLLECTIVE force, win the WAR on police corruption, nepotism, prosecutorial abuse and malfeasance; and the mainstream medias complicit hand in concealing it.

As always with New Zealand’s mainstream media, one needs to read between the lines.