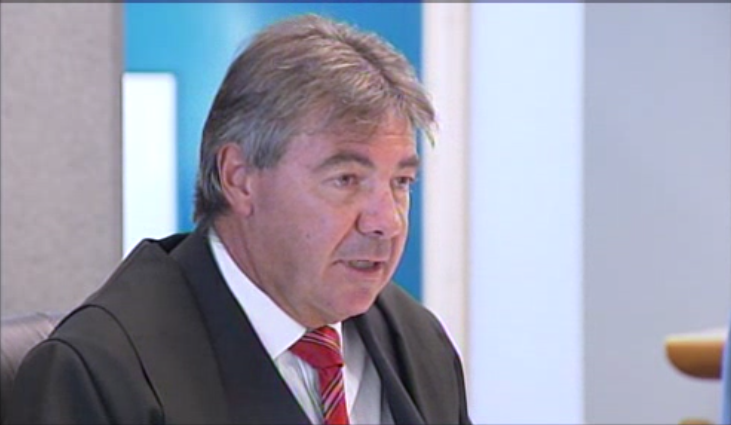 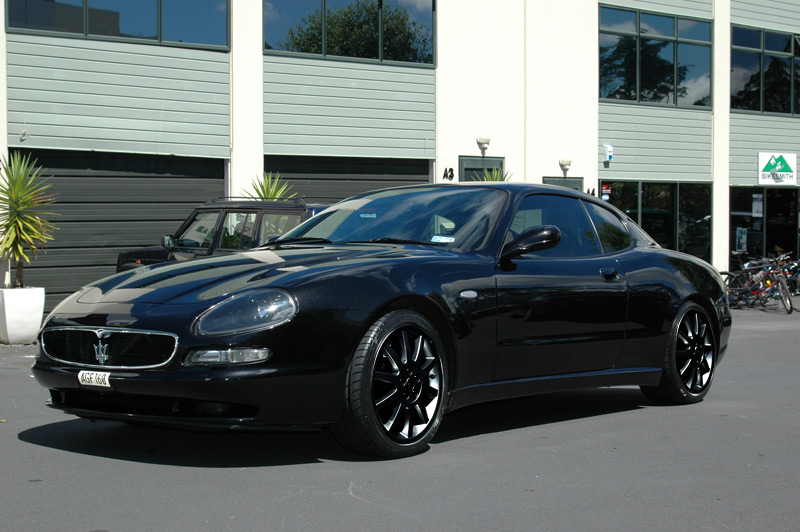 LF have learned that ex Napier Lawyer and Insolvency Specialist Justice Graham Lang has been apointed to hear Cameron Slaters appeal against DCJ Charles Blackies errant decision declaring that Whale Oil Blogger Cameron Slater did not “in his opinion” qaulify as media. As the Judge responsible for presiding over tomorrows appeals list Justice Lang issued a memo early this morning vacating tomorrows scheduled fixture due to be heard at Aucklands High Court.

In his memorandum Lang pointed out that he held the view that the matter required a substantive hearing, that he himself would be free in early May 2014 and indicated that the registrar should advise the parties in Slater v Blomfield not to bother showing up tommorrow as the matter would not be proceeding. LF understands that both parties have subsequently been advised of the change in plans with the registrar seeking a committment by the litigants to a fixture date of 6th May 2014. LF found it interesting that Lang has obviously taken an interest in the matter. Lang is no expert in the area of defamation law, although like most High Court Justice’s Lang will have the requisite expertise to look at various other areas of this case. As aforesaid Langs expertise is very much in the area of insolvency law meaning that he will be well placed to look closely at the commentary Slater published that Blomfield is now choosing to label defamatory. 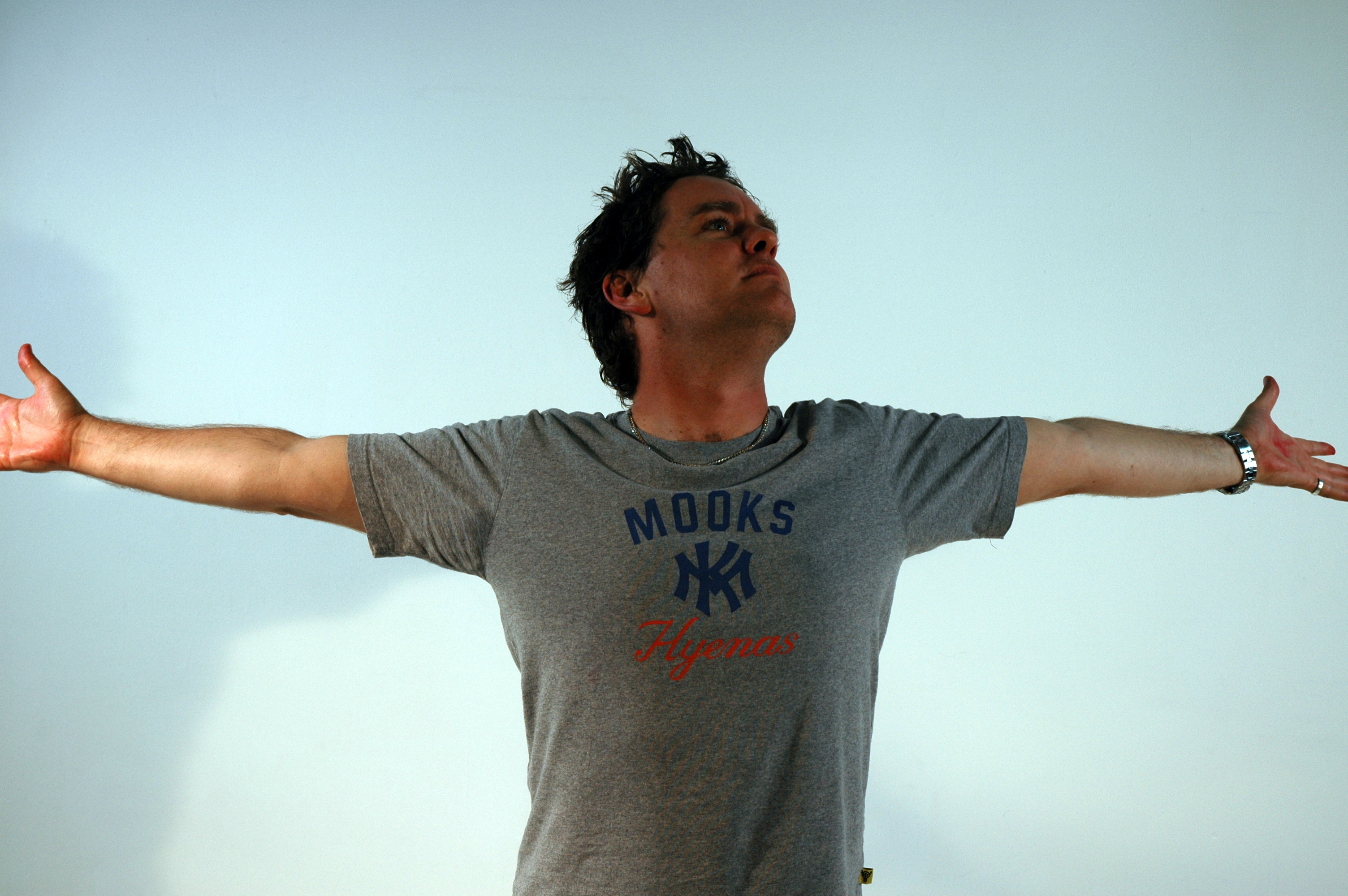 The second cuming of a narcissistic gripper, a wanker that doesn’t no when to let go – Matthew John Blomfield, a man with a serious dose of the old Messiah complex

LF is aware that Slater removed all of his posts on Blomfield prior to Blomfield filing his defamation case in the district court. LF is also aware that Slaters decision to do so was as a result of negotiations that Blomfield had instigated. Prior to those negotiations Slater had suffered a bereavement in the family, his mother had passed away, so it is perhaps understandable that he, at the time did not want the hassle of having to continue dealing with a toe rag such as Blomfield, LF however believes, given that Blomfield is everything Slater had alleged and more, that Slater made a error in judgement when agreeing at Blomfields instigation to remove the material.

Slater may have believed that by agreeing to remove the material Blomfield had complained of that it would be an end to the matter, as Blomfield had himself indicated. However, what is obvious is the fact that Slater when pulling his posts did not seek the advice of a psychologist or Psychiatrist as he failed to account for the fact that sociopaths like Blomfield don’t perceive reality in quite the same way as well adjusted individuals.  Far from it being the end of the matter in Blomfields twisted fucked up mind, Blomfield like any sociopath would have seen Slater’s move in another light. Any verbal agreement would have been soon forgotten by Blomfield, replaced with a twisted schema, that being, Blomfield now believed that Slater had capitulated and as such, at least in Blomfields mind, he had Slater on the back foot so to speak, on the run, beaten, fucked, and with that belief well in truly entrenched over a number of weeks or months, supported by Blomfields yes men, he, Blomfield then decided to resume the attack.

One simple fact remains, Blomfield is a fraudster, he’s also an extortionist, he has perjured himself, he has suborned others to commit perjury, and for a while Blomfield and his cabal had gotten away with it, that is until Slater started to report on their activities. In fact Blomfield, in LF’s opinion, is still at it. The recent attack on Slaters website, which Slater innitially attributed to a bunch of Kiwi rednecked, West Coast, South Islanders, is far more likely to have been the work of Blomfield if anyone; At least that was our assessment when we posted our story on the events in January. That belief has been fortified by the recent arrival of an email the purports to be from Blomfield to Slater, dated the 28th January 2014, approx 24 hrs after www.whaleoil.com had been targeted by the hackers:

A number of things stand out in the Blomfield e-mail. The first is the obvious fact that any smart, normal, well adjusted person would not have sent the email in the first place, especially if, given the fact it were likely to point to the sender as a suspect in the first place, and further that they where involved in a defamation proceeding, wherein the issue of vexatious litigation would more than likely be raised.

The email is clearly vexatious; evidencing Blomfields dislike for Slater and his determination to screw him. But Blomfield, clearly, has now convinced himself that Slater is a soft target and that he himself is somehow untouchable. Another issue that Blomfields email touches on is the aforementioned death of Slaters mother. In LF’s opinion, Blomfield is using this event to remind Slater of their agreement, Blomfield gloating, in coded language, that he had got away with continuing his attack on Slater with the bringing of his vexatious tort.

Blomfield however may now come to regret ever sending that email, whether or not he realises it yet is of course another matter entirely. One of the curious issues raised by Justice Lang in his memorandum touches on Blomfields defence, as respondent, to Slaters appeal:

Blomfield may not realise it but the good judge is obviously putting him on notice that he had better have a fucking good arguement that falls well outside any previous precedent. The fact is that Blomfield will not prevail with this argument. Clearly Blomfield lacks even the most rudimentary knowledge of the law and procedure. Blomfield, in his claim “that the appellant (Slater) has failed to comply with procedural directions made in the District Court” is obviously referring to the fact that Slater has probably not complied with the order to provided details of his informant. Of course Slater having appealed is entitled to that failure and any failure of that nature does not in any way prevent the High Court from determining the validity of Charles Blackies ruling. Blomfiled would of course have been entitled to file his own application seeking orders for Slaters compliance, but foolishly he has obviously failed to do so. Again Blomfields idiocy, lack of legal knowledge and complete arrogance are shinning through; a light that Justice Lang, whilst being required to cut the two lay litigants some slack, may choose to extinguish in a brutal manner if Blomfield continues with this arrogance during the hearing.

Whilst Lang J has indicated that he will be free to hear the substantive matter in May, on or around the 6th, he has also listed the application for mention later this month, Tuesday the 18th February 2014 to be precise:

[3] The parties seek an adjournment for one week. The application will accordingly be listed for mention in the Appeals List on 18 February 2014 at 9 am. On that date, I anticipate that a fixture will be allocated for both the protest to jurisdiction argument and the substantive application.

Blomfield of course hasn’t a shit show in hell of succeeding with his misguided “Jurisdiction” argument. Which leads us to wonder who it was that convinced him to run with it? Blomfield has made a habit of wasting the courts time, he’s certainly made a habit of lying to a whole swag of High Court Judges, a fact that we certainly hope Cameron Slater raises during the upcoming substantive hearing.

Justice Graeme Lang – the man who will undoubtedly be taking a very close interest in Matthew Blomfields “insolvent” past, just in case Slater missed anything

Justice Langs particular expertise in the area of insolvency will undoubtedly come in very handy from what LF can see; Blomfield having lied to various courts, creditors and of course the various recievers, liquidators, and of course his own bankrupcy Official Assignee (OA) whilst concealing assets, cash, precious metals bullion, residential properties, heavy machinery and industrial plant. If anyone will be able to get to the bottom of it all, and with it Slaters allegations, surely it will be a judge with the required experience in this area.

This case, LF believes, is about to turn into a can of worms for the vexatious Mr Blomfield, he will need to evidence that Slaters accusations were entirely or largely false, in that he, Blomfiled, was not a fraudster, a scammer, a liar, and a serial bullshit artist, and from what we here at LF have seen of the evidence at Slaters disposal, and the individuals lined up to give evidence in support of Slaters accusations, Blomfield will be pushing the proverbial shit up hill trying to prove that any of Slaters allegations or discriptions unfounded or defamatory.

Blomfield is, in LF’s opinion, based on the evidence and court judgements and transcripts a lying, caniving manipulative bully boy who has used his toady media associates and contacts to destroy the reputations and legal rights of the people he has over the years defrauded. Blomfield and his bent journalist mates need to be taken out. Obviously that has to start with Blomfield himself, but in LF’s opinion it should not stop there. Journalists such as TVNZ’s John Hudson, APN’s Bevan Hurley and Fairfax’s Maria Slade need also to be held to account for, at the very least, their failure to check facts and the obvious bias with which they wrote and published false and defamatory material at Blomfileds behest, defaming the likes of Blomfields victims, Boris and Jean Yelcich, Hell Pizza, Waren Powell, Cameron Slater and a host of others. 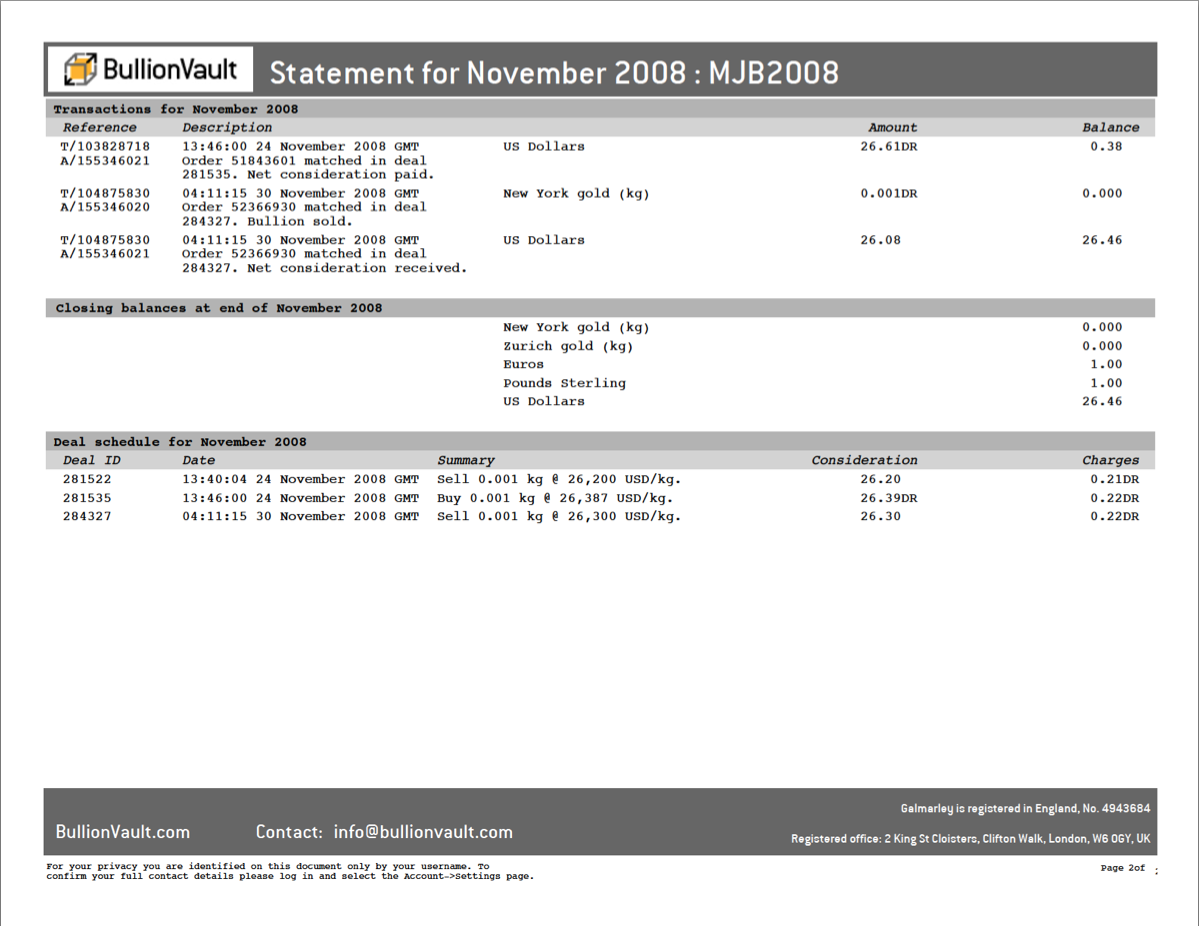 Blomfield was caught last month, by LF, auctioning off some of the aforementioned precious metal bullion on a Kiwi site,  www.trademe.co.nz, a silver ingot which netted Blomfield around $2500.00; which of course begs the question, what is the OA doing in the way of investigating Blomfield’s activities? LF is aware that the OA responsible for Matthew Blomfields bankrupcy, Anthony Pullan, has been warned on numerous occasions that Blomfield has ferreted away and concealed valuable assets, thereby defrauding yet again his creditors. It seems that New Zealands insolvency office, its employees Anthony Pullan and David Harte aren’t doing their jobs, or at the very least are doing their best to keep Blomfields creditors in the dark.

The insolevency office was in fact sent copies of Blomfields emails, account statements spanning a number of years with a Bullion vault service some months ago, and yet it would appear that to date they have again failed to act: 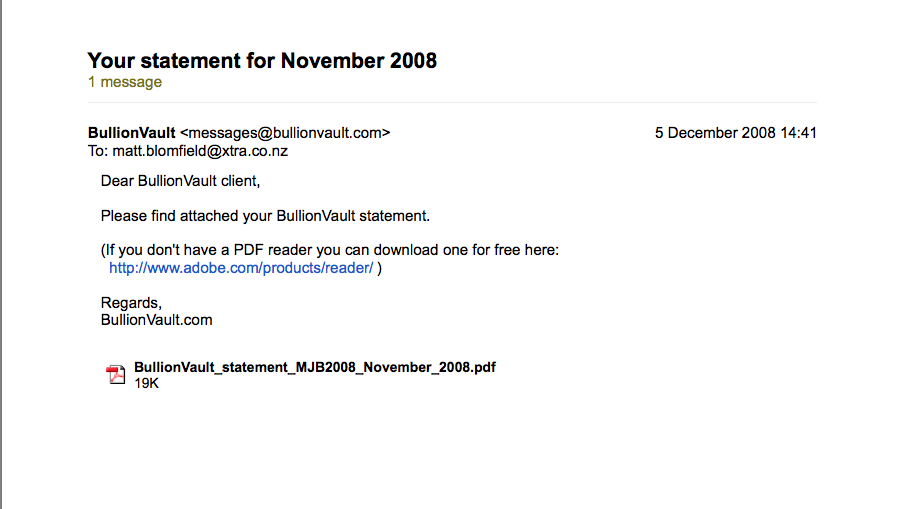 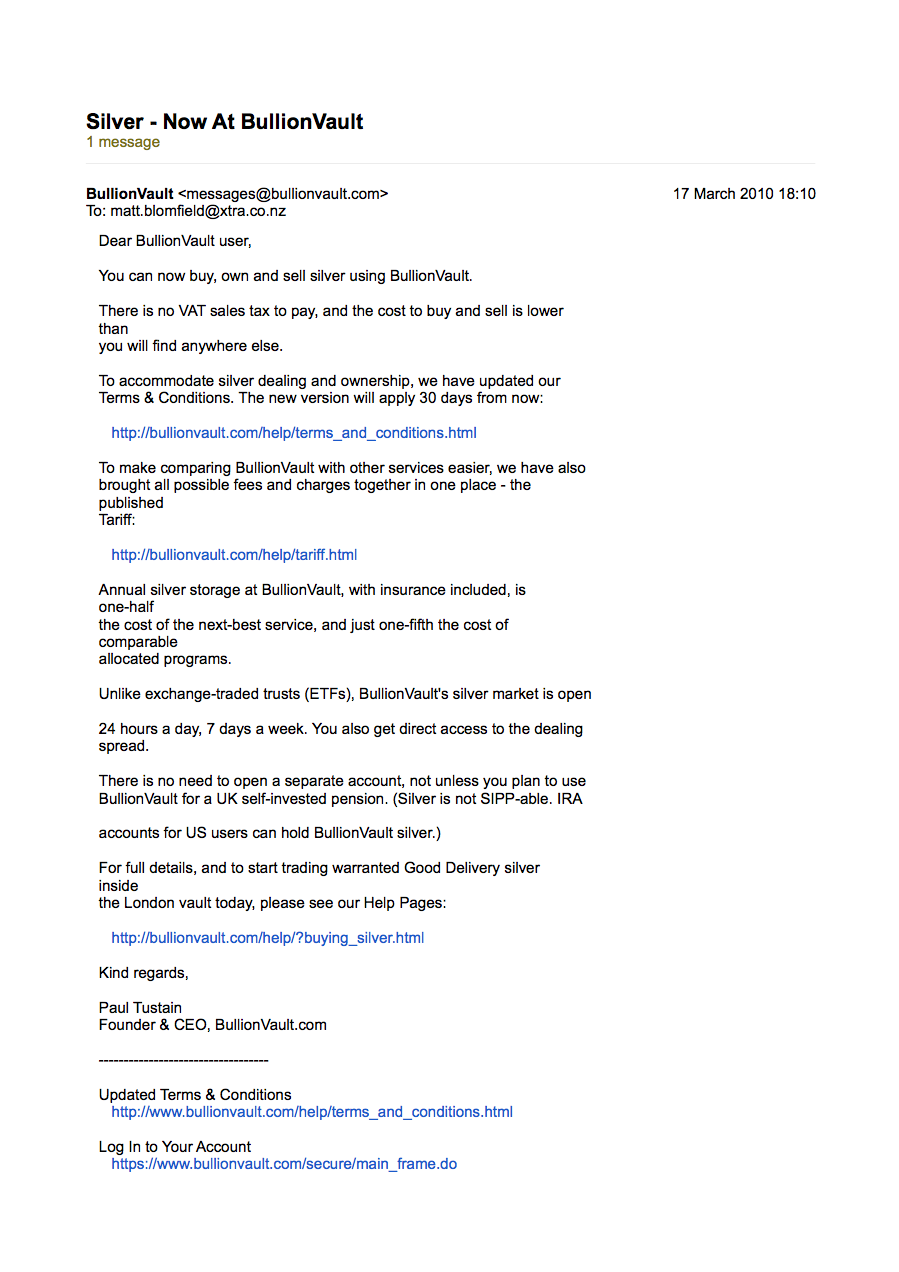 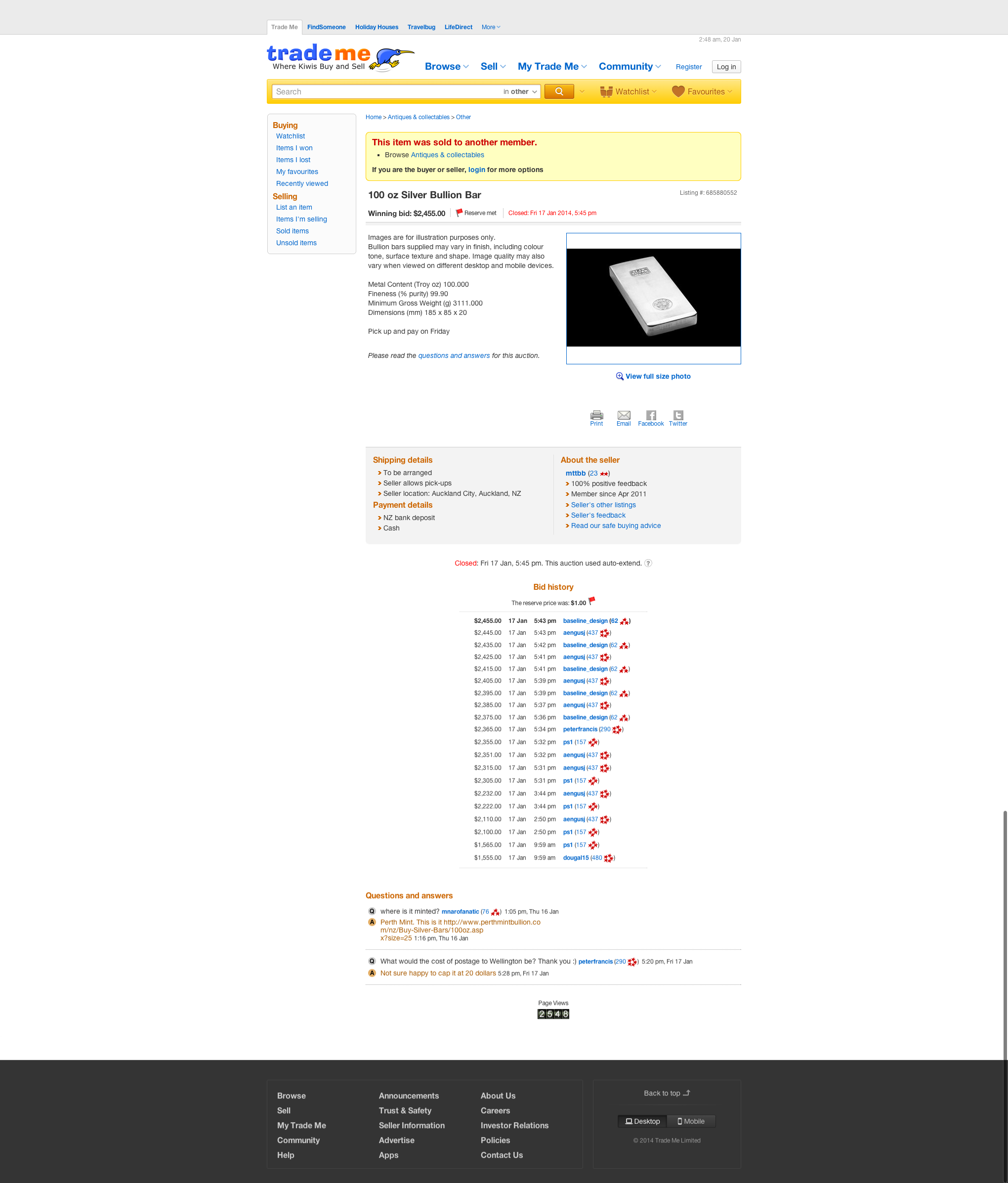 These reports to the OA are in themselves enough for Slater to have called Blomfield a fraudster, after all Slater had taken his duty seriously and reported what he had recieved to the appropriate authorities, Blomfields OA Anthony Pullan being but one, which could of course, given the chronology, be the reason for Blomfields somewhat belated decision to launch his attack on Slater, using the bullshit spurious defamation fraud he’s attempted to foist on New Zealands Courts: 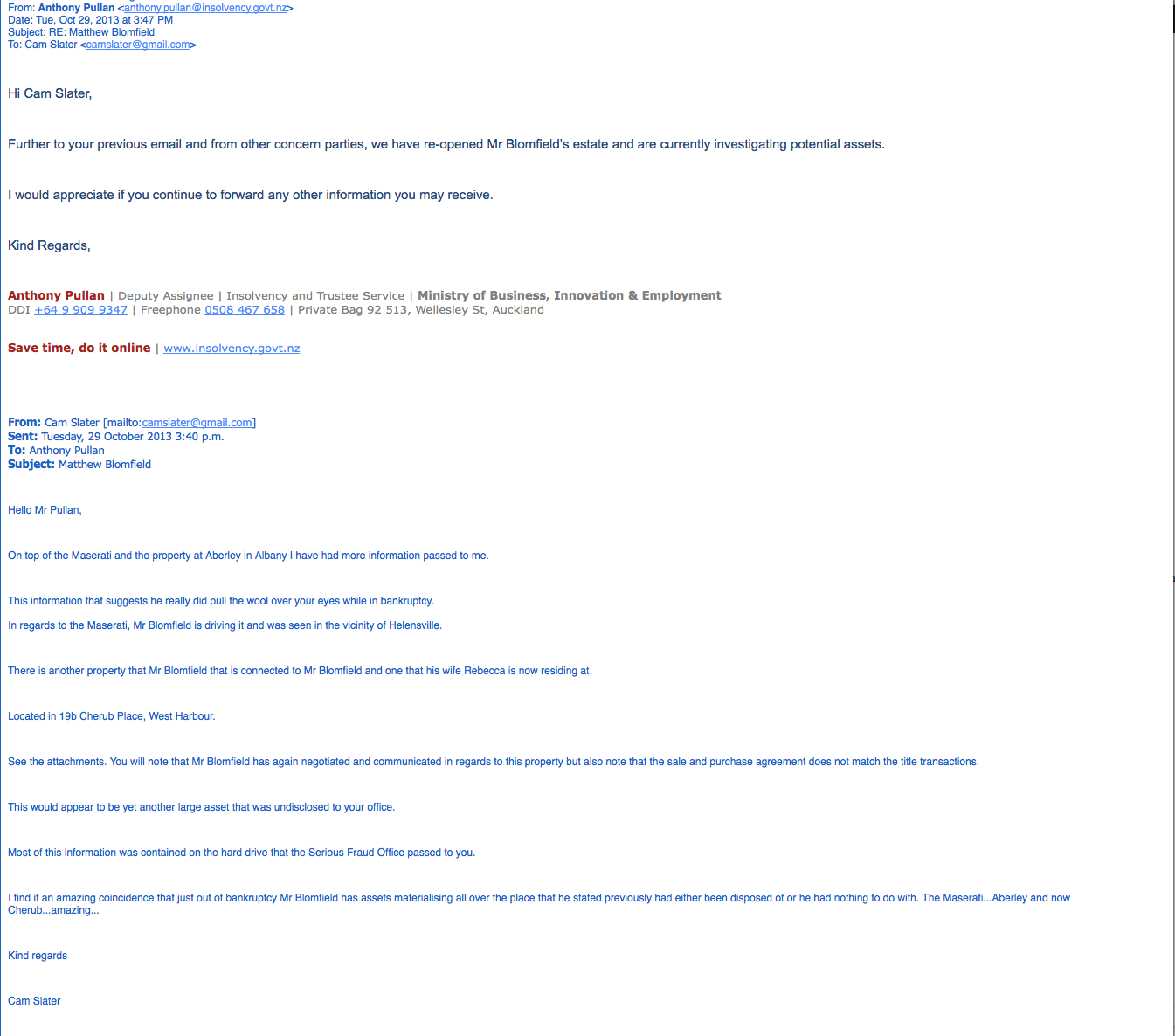 LF have a lot more yet to report on in the Blomfield v Stater saga, but before we post to much more we’re looking forward to the substantive hearing in Slater v Blomfield and Justice Langs take on Blomfields case and his half arsed submissions