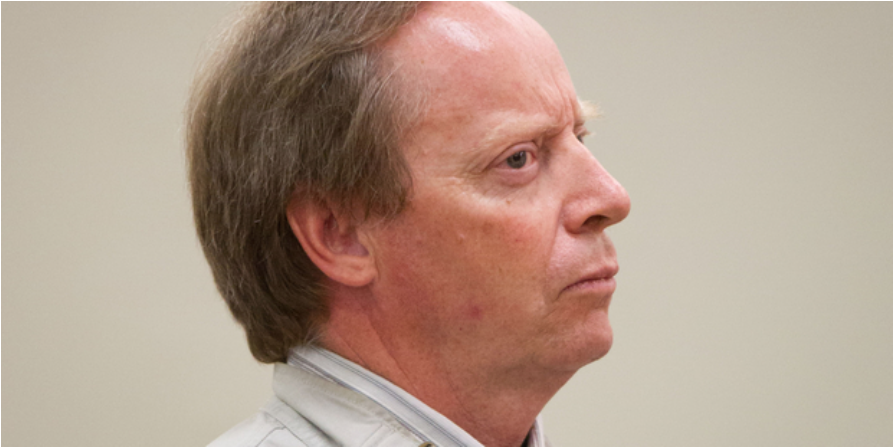 Malcolm Duncan Ingerman Mayer, in the dock at his sentencing

Malcom Mayer is not a happy chappy, as he now faces the unimaginable, up to at least 3 years shower therapy courtesy of District Court Judge Gibson. Judge Gibson sent Malcolm Duncan Ingerman Mayer up the river for 6 years, with a non parole minimum of 3. Mayer looked like he had aged 10 years since the halcyon days at the top of his game. Standing in the dock the little mans skin at least had improved, after a serious bout of stress struck him down during his first trial.

Apparently Malcolm had in fact been given the opportunity to sort it all out without the need for a long list of criminal convictions, he was even offered an ‘out’ by the beleaguered lenders, dodgy dealers and corporate clowns Trustee Execurors Limited (TEL). Give us back the money Malc and you can walk, was their position……..  after all we don’t need the world knowing about just how we got it so wrong. That and they desperately needed their 19 Million back. Mayer spilt the beans and fessed up ‘all’ to Dermot Nottingham in what he thought was an oh so clever trump card move. Judge Gibson recording the event at para [38] of his decision;

‘Mr Nottingham arranged for a reporter, Mr AB Wall, to interview Mr Mayer on 5th September, 2009. Mr Wall was a reporter for the Sunday Star-Times and a story about Mr Mayer based on the interview was published in that paper on the 6 September 2009….As Dermot has pointed out to me that I didn’t think at the time there was anything significantly wrong in that but as Dermot has pointed out to me as well, their was obviously poor judgement on my part”

The trouble with Malcolm was that every one keeps telling him just how clever the guy is when the reality is he not at all clever. The fraud, the concept behind the crime and its execution were seriously old school and obvious. Even more amazing was that Mayer again foolishly made another idiotic decision. Instead of selling the properties and handing over the hidden Mulla, Malcolm decided to fight it all the way. Fight it he did, but he had fessed up to Toney Wall of the Sunday Star Times, whilst sitting in the living room of Dermot Nottingham’s home recounting the Gluttonous orgy of criminal fraud. Wall couldn’t believe what he was hearing. Judge Gibson couldn’t or wouldn’t believe it, Miles Miners of the SFO couldn’t believe it either. Judge Gibson commenting at paragraph [41] of his decision

Mr Wall rightly described the interview as unusual saying, when he gave his evidence, that it was not every day that someone was prepared to talk about their part in an alleged fraud.

Dermot Nottingham grilled Mayer asking him to drive the city and show him what he had done and how he had executed the frauds and the properties involved. Mayer in a cerebral brain fart did not realize that Dermot Nottingham was legally required to hand him up to the authorities. As indeed is every citizen who has some low life criminal clown skyting about just how much of a serious crim he is. Nottingham confronted with Mayers admissions suggested he fess up and help clean up the mess. Mayer however decided to take the sagacious and erudite suggestions of fellow criminal fraudsters, Big Bill Ritchie, Bent “Clever Cloggs”Clode and Lance “Budgie Smuggler” Gilbertson. That flawed decision sealed a serious amount of jail time for the melodious Mr Mayer.

All possibility of a settlement with TEL then evaporated, Mayer hired a gaggle of gormless , malicious unemployed morons the likes of Warren Arthur Wilson, a man with a serious attachment to cheap Chateaux de Cardboard Chardonnay. Wilson along with Mayer conspired to commit further offences so as to ferret away the cash from what ever Wilson could convert. Mayer wanted the evidence located by Nottingham’s colleagues knocked out of court so Wilson came up with another of his brian farts and subsequently knowingly made false criminal allegations against Nottingham,  his brother and colleagues to the REAA who then set about trying to convict them of this conduct. Wilsons false allegations included fraud, forgery, and theft. The crucial incriminating documents Wilson was attempting to discredit were of course recorded by Judge Gibson at paragraph [37] of his judgement;

Members of Mr Nottinghams firm, Remax Realty later uplifted documents from the 5th Floor at Peace Tower and eventually handed them to the Serious fraud Office.

Game set and match LF would have thought; Nottingham delivered the confession the documents evidencing it and a tied and trussed seriously greedy criminal into penal servitude, well shower therapy and endless Bridge sessions. Well…. depending on the sleeping arrangements, solitaire or serious BDSM. What happened to Mayers co-conspirators, well no one else has been charged. All the enablers and co-conspirators have walked free along with the crooked Valuers, solicitors and family members. Mayer himself originally facing 62 charges but got a discount for being sick and another for being a fit and proper person. Well that should probably have been, having never been caught before.

Boy has Malcolm made up for that……six years Malcolm. But a very well deserved six years we’d say. Meanwhile LF is working with various other stakeholders to ensure that Mayers partners in crime, including the naferious Warren Arthur Wilson, are charged, brought before the courts, and held to account for their criminal behaviour……..so stay tuned folks because we always get there in the end, all it takes is a little dedication and of course a little time.