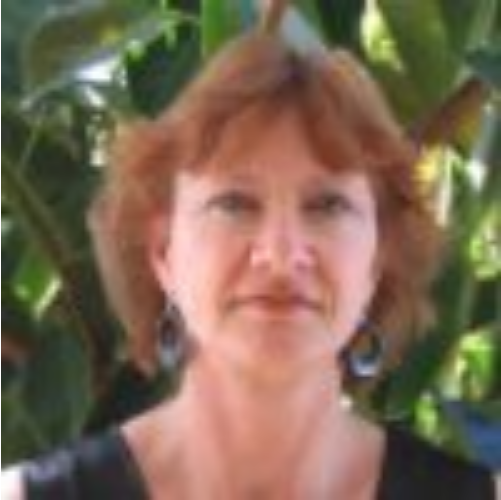 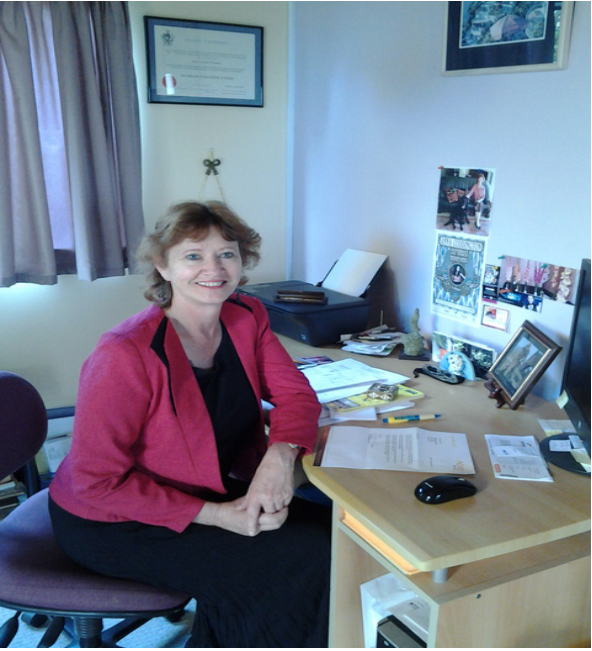 LF has just received some “free” advice from a Kerri L. Thomas of Wanganui, New Zealand about our most recent article on Wanganui serial real estate conman Dale Vanderhoof, and his halfwit accomplice Jean Palmer-Jones.

Apparently Kerri Thomas has strong views with respect to the veracity of LF’s work – alleging its a badly written fiction and little more than “hearsay”, or as Kerri herself puts it;

Your lack of evidence of this alleged set up that allegedly involves a very large number of people is quite breathtaking. It might pay you, if you are going to engage in this sort of reportage, to get a legal education so that you can learn to sift facts from hearsay and unsubstantiated allegations. Unless, of course, you believe that law schools are also part of some conspiracy that you haven’t worked out yet?

Now this sort of reaction to the truth is not all that infrequent when someone’s friend, or a close business associate, has been described in an accurate, albeit unflattering way.  Kerri Thomas, herself a resident of Wanganui, New Zealand, is of course a close friend of many of the other Wanganui residents that LF have named in the offending article.

Thomas has had a book published and the publisher now, having lost a shit load of muller, no doubt regrets ever having met Kerri.  The book is ranked at a flopping 5,171,368 on the Amazon best sellers list. With Kerri’s first book hitting skid row Kerri was forced to self publish her second atrocious effort on a website that, frankly, has some pretty spectacular “rising stars”; 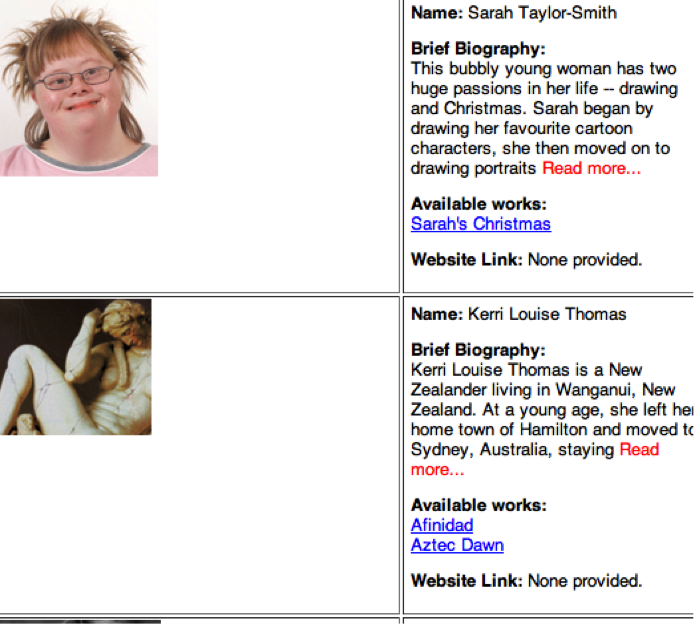 Sarah Taylor Smiths work is ahead of Thomas’s in popularity in the Amazon bestsellers list at 4,999,999 ranking. Having read a little under half a page of Thomas’s drivel we can well understand why.

Now with Thomas’s literary efforts failing miserably at the box office she then came up with an amazingly cunning plan in an attempt to push the idiotic and psychotic rantings contained in her books about females having their private parts abused by real men with massive cocks.  She very cleverly settled on the idea of writing a review for her book “Afinidad”, giving it 4 stars out of 5, just to preserve her own credibility. 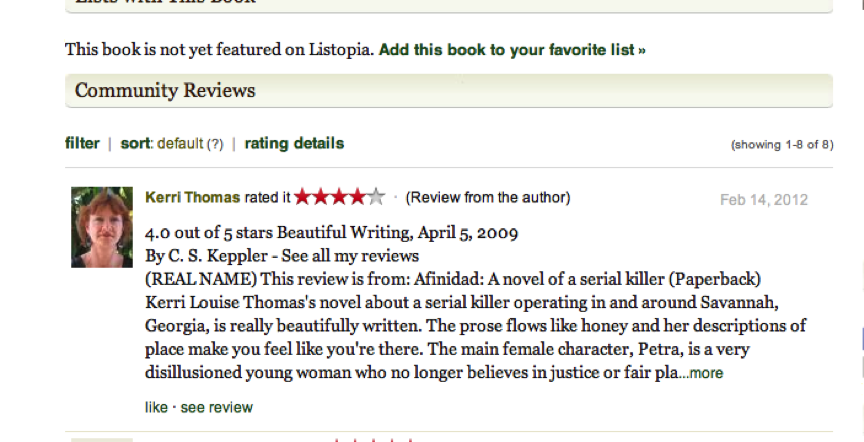 That’s right folks, she is one of two reviews on this site. Who reviews ones own book and states ones own writing “the prose flow like honey”.

Thomas appears to be a bit of a freak, and man hater to boot.  But she seems to like men that have a touch of the criminal streak in them.  One only need look at the back cover of her masterpiece “Afinidad”; 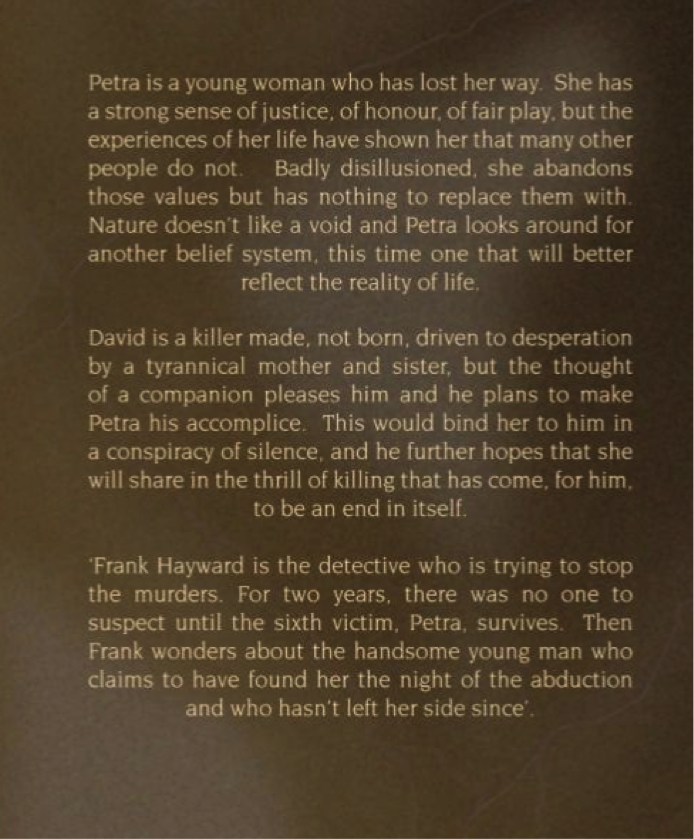 Its badly written [although the author does not think so in her own bullshit review]. A murder thriller – the only murdering going on is the wholesale slaughter of the English langauge and of course fucktardress, Kerri Thomas’s credibility.

Heres a tantilising literary tit-bit, from yet another miserable effort, her second work “Aztec Dawn”: 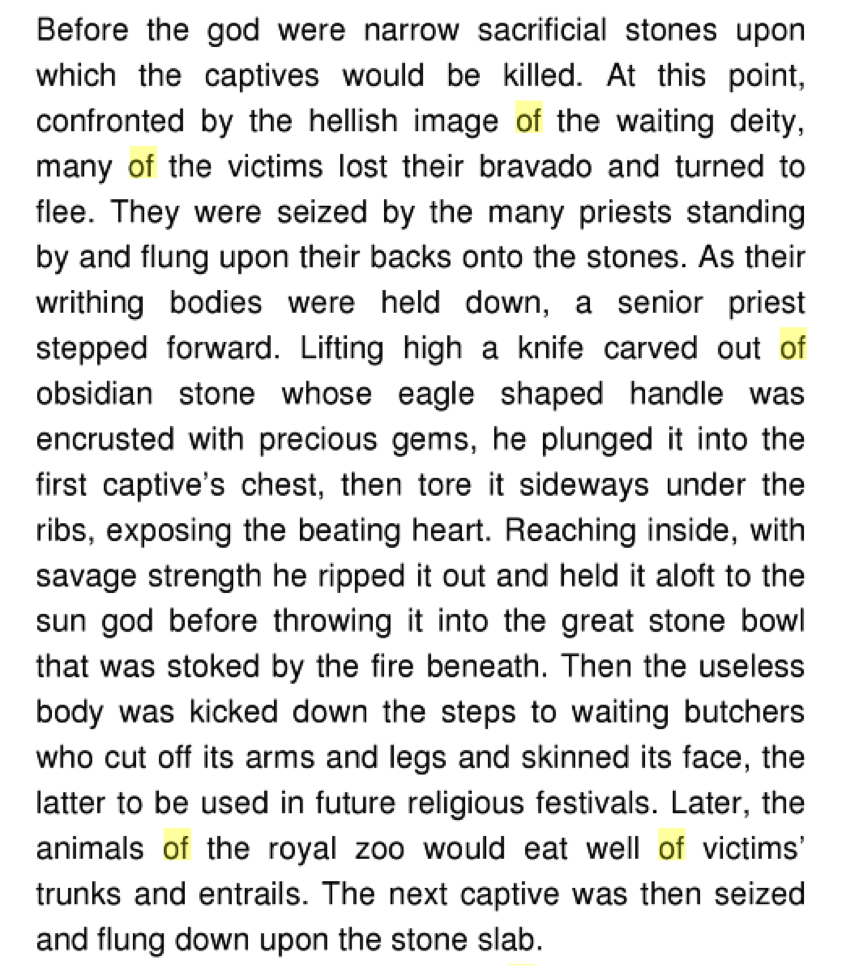 “Aztec Yawn” would have been a more appropriate title for this abject failure – not at all unlike its author really.

Before Thomas turned up in Wanganui she worked for a womens shelter in Auckland; reading between the lines of her literary efforts, she’s probably a well and truly fucked up individual.

Just occasionally LF seems to get very lucky.  We are blessed with the job of writing articles that flush out the crazies, the numb-nuts, the bullshit artists, and fucktard’s trying ever so hard to protect those that are being investigated for dishonesty, intimidation, corruption, or just plain old nepotism, or gravy training.   And so it is that Thomas joins the long list of nut-jobs who’ve, over the years, foolishley decided to throw their weight around, in Thomas’s case its her star studded stella career that she’s thrown into the LF pot in order that she could alert readers to the fact that LF was in itself a fraud.

Well loyal readers, its happened yet again.  These shysters come, they fight, they lose, leaving LF to fuck their past, present and future, because the unpalatable truth is that every one of them has been a deceitful, lying fucking fraud.

In Thomas’s case she’s apparently recieved a BBS, and she purports, with a major in law.  The letters BBS of course stand for bachelor of Business Studies, unfortunately its a bit of a “why the fuck bother degree”, especially when its been handed out by a second rate Kiwi Uni.  The majoring in law bit, however, is most likely a scam dreamt up by Thomas, and we will explain why.

Since arriving in Wanganui Thomas has set her self up as a “pretend lawyer” which is in itself an offence under the Lawyers and Practitioners Act 2006.  Section 22 of that Kiwi Act provides;

(1)  A person commits an offence who holds himself or herself, or any other person, out (whether directly or indirectly) as providing legal services, or as being entitled, qualified, able, or willing to provide legal services, under the description of lawyer or any of the terms specified in subparagraphs (ii) to (viii) of section 21(1)(b), if it would be an offence against section 21 for that person or, as the case may be, that other person to provide legal services under that description.

(2)  A person commits an offence who uses or permits to be used in connection with that person’s name or business or with the name under which that person carries on business any words, letters, or symbols that the person intends to cause, or are reasonably likely to cause, anyone else to believe that the first-mentioned person or any other person—

3)  A person commits an offence who uses or permits to be used any words, letters, or symbols that the person intends to cause, or are reasonably likely to cause, anyone else to believe that the first-mentioned person or any other person possesses a qualification in law or any branch of the law or possesses special expertise in any branch of the law, unless the first-mentioned person or, as the case requires, that other person holds that qualification or possesses that special expertise

LF has managed to locate, online, the following advertising that we believe specifically breaches section 22 of the Act: 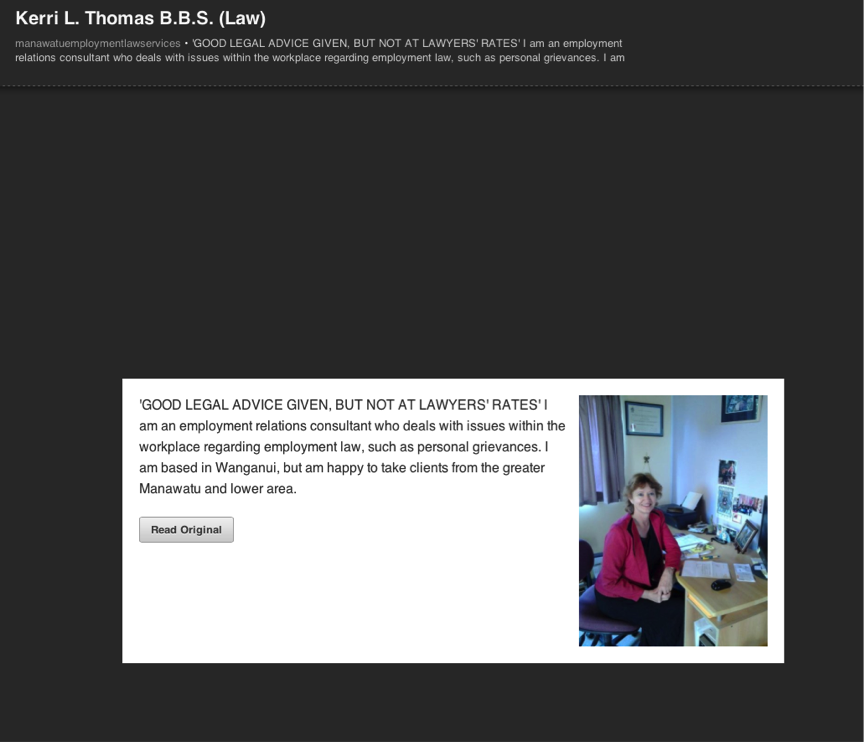 This advertisement is clearly creating the impression that Thomas is qualified to give legal advice and that she has a qualification to do so as a lawyer. But theres more as there always is with scumbags like Thomas. 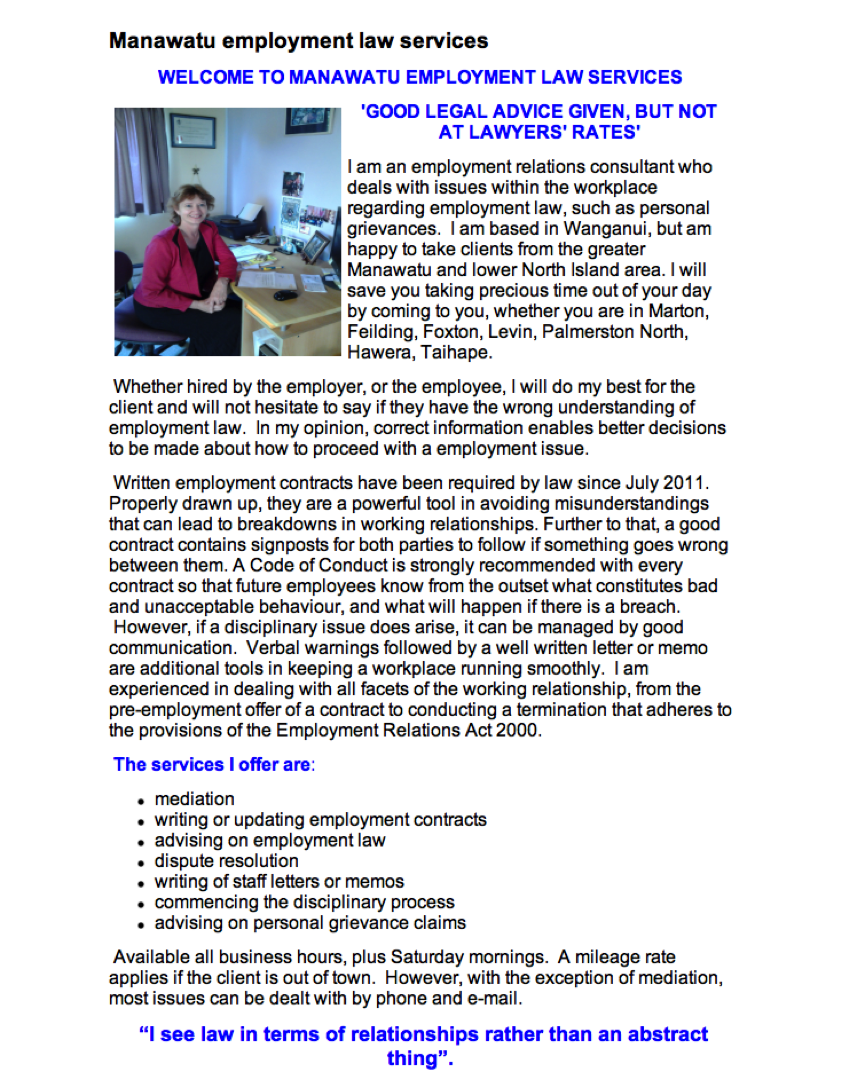 Again the statements are designed to mislead, or to infer qualification to give “legal advice”. Her use of the term consultant at various places does not ot itself right the intended deception.

Now lets take a little look at the kind of advice this low-life fraudster gives out to “employers”;

Thomas is not a lawyer, she holds no law degree, she’s never been admitted to the bar, in fact, the reality is that Kerri L. Thomas is little more than a facsimile of failed Re/Max real estate franchisee and  fraudster Dale Vanderhoof – a dyed in the wool low life con artist who thoroughly enjoys dry humping unsuspecting consumers by claiming to be something she is not – a lawyer.

Anyone who has an axe to grind with Thomas should make a complaint to the New Zealand Law Society about her deceptive conduct in making out that she is a lawyer, and qualified to give legal advice.  Her advertising and behaviour does not equate to exceptions as provided by section 27 of the Act.

Her behaviour is a criminal act, which makes Kerri Louise Thomas a criminal.  But the more serious crimes are to be found in her books, and in the way that she thought it was reasonable to review her own book; now that really is the work of a complete and utter fucktard.

The New Zealand Law Society’s website has a ‘how to complain’ page which will assist readers who may have been conned by Kiwi “Claytons” lawyer, Kerri L. Thomas;