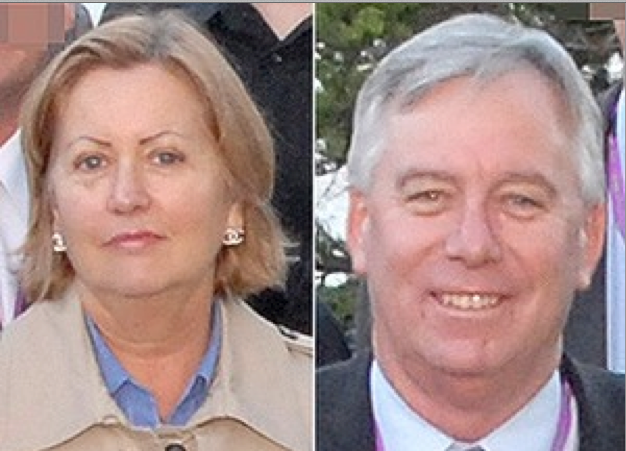 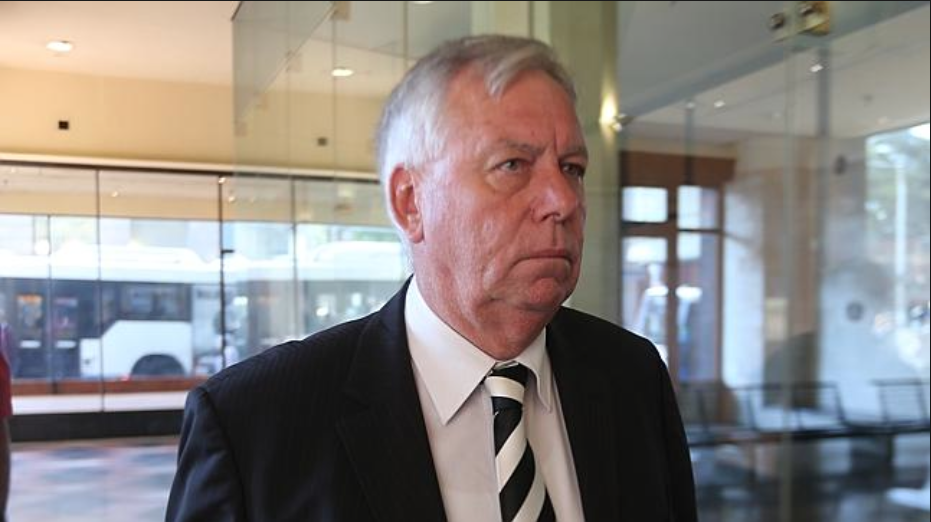 Low rent loser and prisoner of her Majesty, Craig “crim-a-ling” Thompson has a new cell mate with his mentor in fraud being sent down for an even more extensive portfolio of crazy criminal behavior.

This scum sucking low life and man of means….other peoples, – was caught by the “Rozzers” with a boot load of credit card receipts, accounting records and condoms. The NSW constabulary didn’t have to bother with a forensic accountant, the Health Services Union boss did it all for them.

Williamson is reported as saying “fuck off you pimple faced little loser”.  Williamson’s not wrong, but at least we’ll be sleeping in our beds tonight and not sharing the blanket with bubba the botty bandit.

It just sounded like a great place to work….huge money, ciggies, and hot expensive hookers, what more could a pimple faced little loser want for.

Michael Williamson was a man of the people, a great man, previous Labor Party President between 2009 and 2010 and all round respectable consensus reality fucktard. 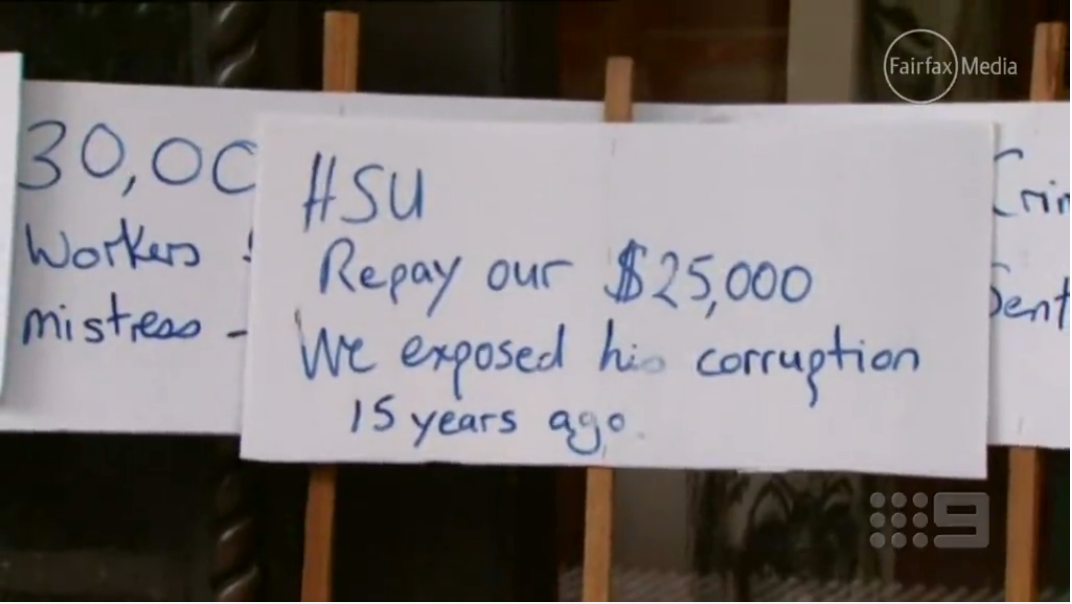 A fit and proper person to head up one of Australia’s biggest Unions, biggest political institutions, and a raft of other senior roles, within polite society. Williamson served as a member of the National Executive of the Council of Trade Unions, a trustee of First State Super Fund, and non executive director of SGE Credit Union, a credit Union for NSW Government employees such as the Rozzers.

It was in this role that wicked Williamson first got a taste for taking other peoples money and not giving it back. Williamson was finding it hard to make ends meet with his 500k plus salary so he decided to expand into some good old fashioned entrap-preneurship. You know the old scam, start up a few companies who send the Union, that you head up, dodgy accounts for computer and advertising services, and in fact, any fucking services that pays a shit load of filthy Lucre for doing nothing.

It’s a well respected business practice amongst organized criminal families. Williamson had his whole family suckled on the Union teat. All of the pricks on enormous bloated salary’s.  You can see why our young Sydney asset wanted in on the game.

In 2008 “Big Micky the maggot” Williamson had his son start up a music studio in a Union owned building, and said to his pimply arsed son – no need to pay rent as I am the boss of bosses.

“A PARASITIC PLUNDERING OF UNION FUNDS FOR PURE GREED” – Judge

That company “Studio 19” was the brainchild of fucktard little Chris “the crimlet” Williamson and his go nowhere band of musical morons called “overpass” – Well the music passed over “overpass”.

The band was so bad big Mickey built a $140,000 film set at the Unions head office in Sydney because of noise complaints from Mascot Airport. So “Overpass” started making their own music video’s in what was ostensibly called the HSU museum and broadcast unit.

Having fraudulently scammed the funds for the revamp, Big Micky and liddle Chris “the Crimlet” Williamson started leasing the venue out under another sham company “Tank Stream productions”. Advertising the Unions museum as a “Architecturally designed, acoustically engineered and technically advanced cash cow”. Ok the production facility was described in the accounting records as the HSU History and Media Centre….snigger.

Chris is described on his facebook page as being the project officer at Tank Stream Productions as well as holding down another position with the Union as it’s media liaison officer.

The scams didn’t stop there – Big Micky had his wife, and surprise surprise, his mistress, both gainfully employed with the Union. Mrs Williamson was running a bogus company called Canme Pty Limited through which Williamson funneled bogus fraudulent invoices as he raped his way through the Unions finances. Mrs Williamson has not been charged and neither has Big Mickey’s fucktard son liddle Chris. LF wants to know why?

A deal was done where Big Mickey Williamson pled guilty to two charges of fraud, one of fabricating invoices, and a charge of recruiting others to hinder the Police investigation.

The balance of the original 50 charges were withdrawn. In fairness to the boys at the DPP Williamson was sentenced representatively so it didn’t make a whole lot of difference in the long run.

Cheryl Rose McMillian is being sued by the Union for the recovery of 2.4 million along with another sexual partner Alf Downing who’s company supplied the union with invoices…..nothing else just invoices….expensive invoices.

The gutless groveling squirming maggot Williamson also vowing to assist the Union in hunting down and recovering the funds funneled through his cronies and co conspirators.

Why because he has lost his bottle and this gormless gutless shyster will sell everybody out for a reduced sentence. Williamsons co-conspirator wife Julie Anne apparently has dropped him like a hot rock and is running for the Hills with a hand bag full of cash. A cool one million …..you go girl……to jail and lets keep the cash. 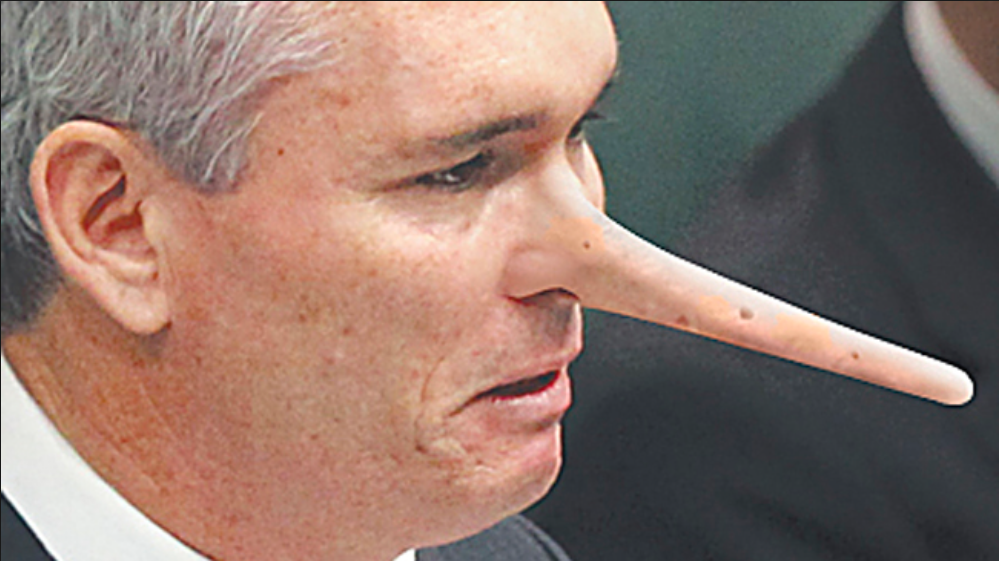 It’s a matrimonial settlement fuck off…..it’s proceeds of crime, so get after her boys and girls of the NSW constabulary…or surviving members of the toe cutter gang. You could probably give her a brutal pedicure.

The suppliers who were parties to these frauds should also be charged. The director of printing company Access Focus who funneled kickbacks and supplied American Express credit cards for Thompson and Williamson should also be charged as should Cheryl Rose McMillian, Williamson’s mistress and former employee of the Union and corporate bike.

So what did Judge Frearson have to say when he sent this clown down. Well he described Williamsons behavior as parasitic plundering, the frauds calculated brazen and arrogant. It was a reprehensible betrayal of the union and all its members. He alleged that Williamson exercised “ some kind of supreme power” over the other fucktards who he engaged to defeat the Police investigation.