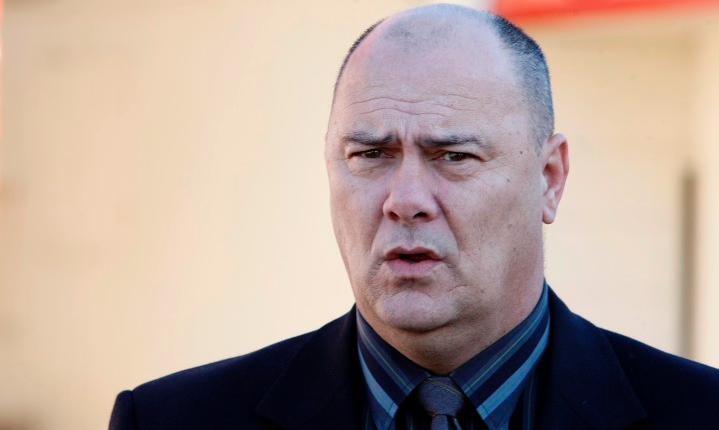 Tau Henare, the retired National party MP who revealed New Zealand’s best kept secret – the name of Grahame Thorne, who had been granted “permanent” name suppression by one of New Zealand’s halfwit judges

Last evening LF’s post outing Grahame Thorne as the well-known Kiwi with name suppression received an inordinately high level of traffic. LF went looking for the cause of the sudden spike and found a small Fairfax article that had been posted at around 2100 hrs [NZDST], that offered us a clue to the likely cause:

A retired National Party politician has named a prominent New Zealander who escaped conviction over a sexual charge in Central Otago.

Earlier this year the man was discharged without conviction, on payment of $6500 reparation to the female complainant when he appeared in the Dunedin District Court on an indecent act charge.

He was granted permanent name suppression.

The man has never been publicly named although in the run up to the general elections, then Labour leader David Cunliffe was castigated for briefly meeting with him.

Last month Hemsley told Fairfax she always considered herself to be a bubbly blonde but all that changed in her kitchen one day in November 2011.

The man grabbed her from behind, put his hands on her chest and placed her hand on his groin, she said.

She tried to fend him off.

“I said ‘you crazy man’, I tried to push him back. You’re married and I’m married and just, you know, just stop it, don’t be so stupid. Because he’s much taller than I am and being so short he was able to sort of overpower me. He pushed my head back and he was putting his tongue down my throat, I was trying to push him off and talk to him, just talk him out of it, telling him to get his paws off me.

“During the process he put his hand down the back of my pants inside my clothing, he rubbed his hand across my chest and just kept kissing me. It was just octopus-like…and all the time he’s trying to stick his tongue down my throat.”

In 2010 blogger Cameron Slater was convicted of eight counts of breaching name suppression orders and one count of identifying a victim of a sex case in a blog.

Today a number of New Zealand’s MSM outlets followed up on last evenings Fairfax story with little more information than the fact that Thorne’s Lawyer, Jonathan Eaton QC, had laid a complaint with police. Both the Otago Daily Times and the New Zealand Herald (syndicated) ran one of these stories at around midday NZ local time:

A complaint has been lodged with police against a former politician who tweeted the name of a prominent Otago man who has permanent name suppression.

The man’s lawyer, Jonathan Eaton, QC, confirmed to the Otago Daily Times a “formal complaint was lodged with the NZ police last evening”.

The Otago man escaped conviction and identification on an indecency charge, almost two and a-half years after the offence was committed, when he appeared in the Dunedin District Court earlier this year.

He was discharged without conviction, on payment of $6500 reparation to the complainant.

In August 2012 the man pleaded guilty to a charge of performing an indecent act on Central Otago woman Louise Hemsley, who won a legal battle to have her suppressed name lifted.

A police spokesman said they were aware of the suppression breach.

“Police are aware of the tweets and will assess what appropriate response may be be required,” he said.

So it appeared that we had managed to locate the source of the interest in our post, a story that LF first published weeks ago, a story that fellow Australian, Derryn Hinch had in fact reported on earlier this year when he named Thorne as the man who had sexually molested Central Otago woman Louise Hemsley, and then through a series of sly legal manauvers later escaped criminal conviction and penalty.

Jonathan Eaton, Graham Thornes Barrister, with corrupt cop and sexual deviant Gordon Stanley Meyer outside the High Court in Christchurch, where Meyer had admitted charges of corruption and bribery.

There was however one piece of vital information missing, just who was the ex National Party MP who thought that he was giving the web something new. LF went looking and found the offending tweet:

Henare is of course not the first to have named Thorne as the culprit, nor was his tweet that informative, not much at all in the way of detail. But that’s not the point. Why did the New Zealand media then keep Henare’s identity a secret? Surely New Zealanders are entitled to know when another “well known” Kiwi outs an offender who has managed to slip out through the back door of New Zealand’s thoroughly sick legal system. Henare was not presenting information that most New Zealander’s didn’t already know, at least those who have an internet connection, a point that was quickly picked up on by another tweeter, @thomasbeagle:

The fact is that whilst Beagle’s tweet was hilarious it was also right on the money, Henare’s “Bold” decision to “out” Thorne was hardly news, and there are of course many more “high profile” politicaly connected kiwi’s that are still managing to hide behind the country’s fucked-up name suppression laws at great psychological expense to their victims.

Take for example the case of the recently, National party, appointed High Court Judge, ex Auckland crown solicitor and prosecutor, Simon Moore QC, who prior to being appointed to the bench was also the chair of Auckland private school Kings College and in that position wrote an inappropriate and derisive letter to the victim of child sexual abuse at the hands of one of the schools teachers. In that case the suppression orders are around the identity of the school and LF believes exist for no other purpose than to conceal Moore’s identity and his own egregious behaviour toward the victim.

So just what was Henare’s motivation in this case?

Only he will be able to answer that question of course, perhaps he will have that opportunity soon enough if the police pursue Jonathan Eaton’s complaint. Perhaps Tau Henare just wanted the opportunity to point out the fucking obvious, that New Zealand’s courts and their little name suppression scam is proving to be all but useless.

The fact is that Graham Thorne’s name, and the details of his criminal offending, has been readily available to anyone who googled his name, with LF’s story among the first results to present on page one of any search. If the police care to look then they would no doubt, without the slightest effort, manage to locate literally thousands of Henare’s fellow countrymen and woman who have used social media and chatroom pages to also publish Thorne’s name, most complete with url links to either LF’s story or the articles published by Derryn Hinch – with far more detailed information that has been readily available for months.

Theres another question though, who was it that dobbed in Tau Henare, who amongst his political disciples and or twitter followers wrote the Fairfax story, unsurprisingly the Fairfax article is not attributed to any journalist.

LF would still however like to congratulate Mr Henare for having publicly named Greame Thorne whilst standing on New Zealand soil, for that he does deserve a big pat on the back, especially given that both he and Thorne are ex National party MP’s – as is often said, better late than never!

Perhaps more of New Zealand’s pollies, of all political persuasions, may now see fit to follow Henare’s lead and start naming the other bastards who’ve been hiding behind unwarranted name suppression orders, especially those current pollies who have the benefit and protections that parliamentary privilege always affords them, after all they’ve never had any qualms naming people in the past when it’s suited their own nasty political agenda’s, so how about doing it for their constituents for a change?