The Tweep, The Fraudster & The Blackmailer – The Case Of The Camera In The Bathroom

Following LF’s press release and our announcement of the move to our new .org location a member of team LF had a most unusual encounter on twitter, which we feel warrants a little explanation. 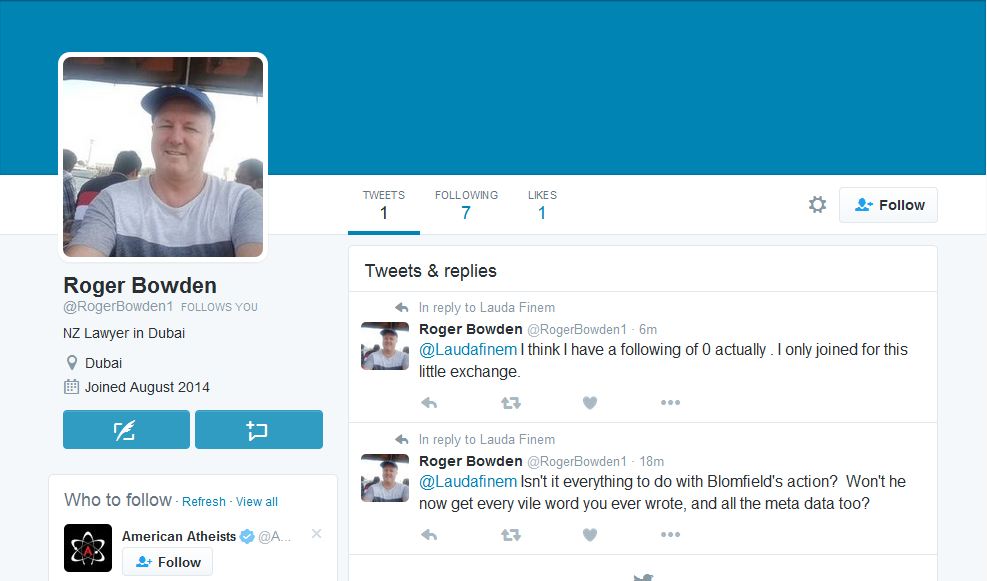 Now of course when we looked, as one does, the account, as we expected, was brand spanking new, no followers and following just seven.

This account status immediately through up a red flag, so we entered the name “Roger Bowden” into our handy data-base and hey-presto it threw up Matthew John Blomfield.

That red flag was because Roger Bowden was a lawyer that Blomfield used when he was running fraud scams in his home town of Whangarei, New Zealand.

In fact Blomfield and Bowden go way back to their schooldays and the good old days when Blomfield liked to claim he hung around with the local gangsters; strip joints and prostitution setting the scene.

Now of course we are not saying that the twitter account actually belonged to Bowden, who is now domiciled in one of the United Arab Emerates, Al Hamra’, RaʼS Al Khaymah to be more precise and likely practicing his unique brand of Kiwi property law.

No, in fact from the outset we knew that the account had in fact likely been set up by Matthew John Blomfield, in yet another of his “cunning as a weasels tail” pathetic cyber ruses.

The likelihood of a faker was to become even more obvious when the account was suddenly closed; within seconds in fact of our online exchange of views. 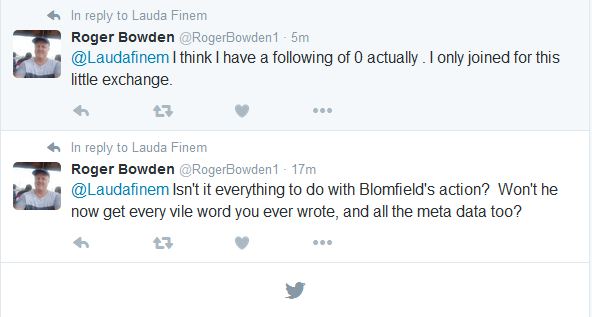 Well, to be honest it wasn’t so much an exchange of views, more like Blomfield hoping to gloat, being exposed and receiving a cyber bashing.

Clearly, more than a little shocked that we did in fact recognize the name “Roger Bowden”, Blomfield then quickly tried to down scale his smart-arse-ary and make his escape, but not before we let it be known that we knew all about the role that Kiwi lawyer Roger Bowden had seemingly played in one of Matthew Blomfield’s first ever successful extortion’s; yet again using the New Zealand Courts, at least in name, to intimidate and blackmail. 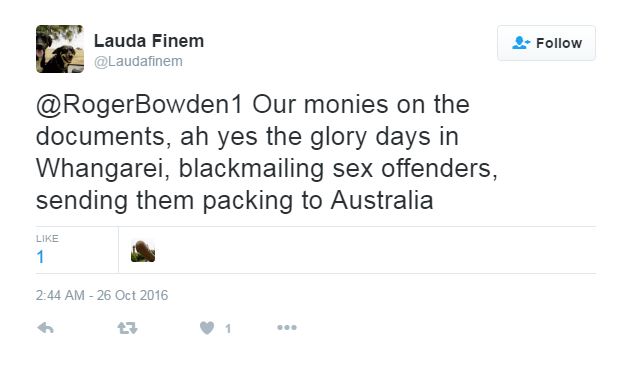 The scam was classic Blomfield. In fact we have a sneaking suspicion it may have been where he first cut his teeth in the blackmail game, developing a system that would stand him in good stead for years to come, culminating in his being caught blackmailing Mr Shiv Mattu a year or so ago. 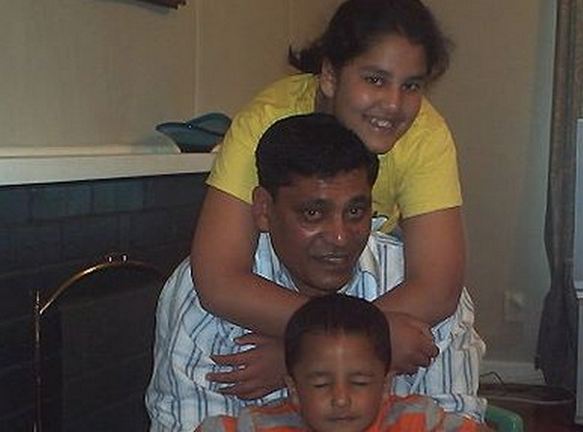 Mr Shiv Mattu, a more contemporary victim of Blomfield’s liking for blackmail as a profit center.

The scam goes a little bit like this; Blomfield had heard on the grapevine that a particular employee of one of the seedy Whangarei stripper or night clubs he worked in, or frequented, had a dirty little secret.

This person had, over a period of time, shared their flat with a handful of female flatmates and had foolishly installed a concealed camera in the houses shared bathroom; connected of course to a computer in his bedroom.

Blomfield heard about it and, as is his indomitable style, subsequently arranged for his stripper girlfriend, Rebecca Blatchford, to move into the home; on the pretext that she needed emergency housing.

Of course that wasn’t the real reason for Blomfield approaching his “mark” and arranging the “emergency” accommodation – as always Blomfield had a game plan in mind, one that would result in another payday.

Matthew Blomfield, why is it that the New Zealand police, who have had access to the same documents as LF, have failed to prosecute this creep?

Blomfield then left it for a period and subsequently, when visiting the premises at a later date, broke into the bathroom perverts bedroom and stole his computer; containing the voyeurists video footage. – Again a classic Blomfield strategy!

It’s at this point that it gets very interesting, for it seems that Blomfield knew all to well that demanding money in exchange for his silence would be a clear-cut criminal offense, otherwise known as blackmail.

So instead of being crass Blomfield may have thought to involve a “friendly” lawyer, an old school chum; enter Roger Bowden, stage right.

Together they seemingly arranged to draw up a purported “statement of claim”, in which Blomfield’s girlfriend, enter stage left, Rebecca Blatchford, now Matthew Blomfields wife, but at the time a local Whangarei exponent of the art of “Strip Tease”, and one of her colleagues, were the purported applicants. 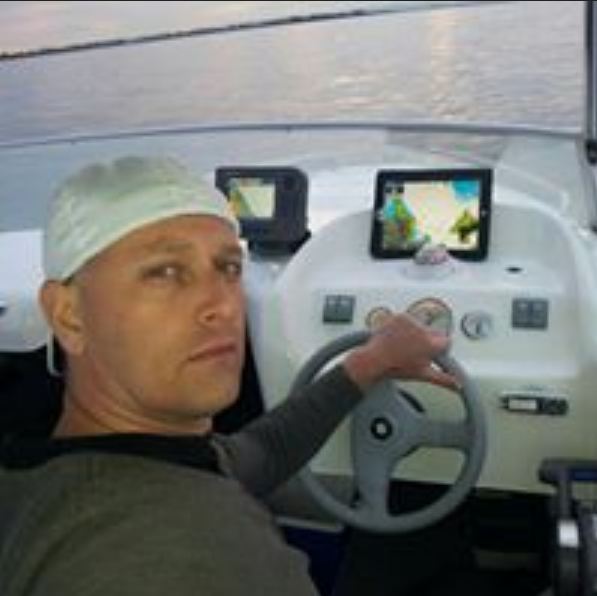 Out on the boat

The upshot was that Blomfield then demanded the sum of $30’000.00 from this sex offender and forced the man to leave New Zealand permanently; he now lives in Queensland Australia.

Now whether of not Blomfield actually did use Bowden, and a fabricated the tort documents, which may never have seen the inside of a Kiwi court registry, is somewhat irrelevant.

Blomfield still clearly intended to extort cash, in this case around $30k, secure the mans fear and force him to depart New Zealand in return for the cash and his silence.

It’s a familiar methodology, in fact it’s exactly the same formula, that Blomfield has gone on to use when handling a number of profitable “challenges” in the more recent past. 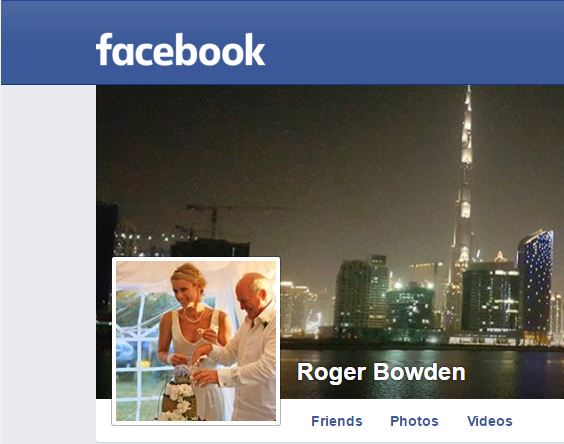 The matters of Warren “Otis” Powell and various other threats made to Mr Mark Spring are both pretty good examples that come to mind, in addition to the case of Mr Shiv Mattu of course.

The concealed Camera in the bathroom offending was never a civil matter, it was clearly a criminal offense, covered by the New Zealand Crimes Act 1961.

As such, we doubt very much that any High Court Judge would have entertained hearing such a case in the civil jurisdiction without first bothering to ask the all important question; was this criminal sexual offending ever reported to the New Zealand police?

At which point, of course, Blomfield’s own criminal extortion scam would have been exposed and undoubtedly fallen over. 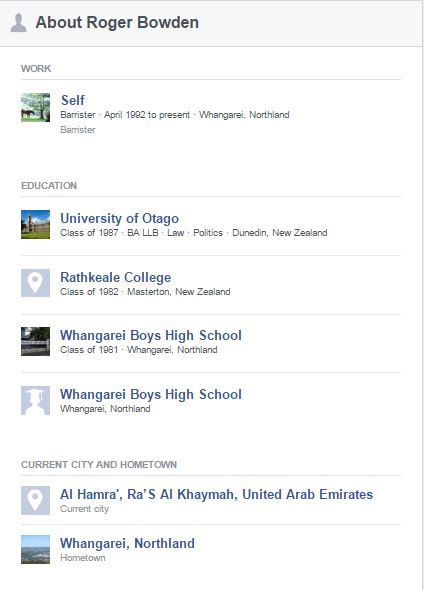 Now there are two other aspects to this little scam that greatly displease us here at LF. The first is that Blomfield forced this man out of New Zealand with the threat that he would be reported to police if he didn’t go.

What’s more, this sexual offender, fearful of exposure and jail if he didn’t do as Blomfield had demanded, immediately migrated to Australia and continues to reside in Queensland, where he clearly does not meet the good character requirements for the SCV he obtained to gain entry. There is also the very real possibility that he has re-offended here in Australia 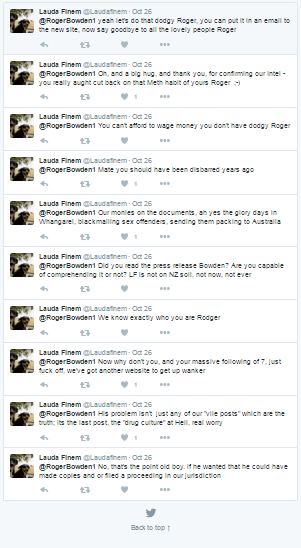 On this basis, team LF will now be making a formal complaint to our own Australian authorities. Naturally enough we’ll be providing the evidence that Australian Federal Police, Immigration and Border force will require to effect their own investigation and possibly the deportation of this sexual offender from Australia.

We will also be providing our authorities with substantial detail on Matthew Blomfield, this scam and others, should they wish to pursue a warrant for his arrest at the border, if he ever attempts to enter Australia.

What may also be worth the New Zealand police getting up off their fat arses and investigating, is whether or not Blomfield’s mate Roger Bowden was actually ever involved in this criminal stunt; or whether, as we suspect more likely, it was just another occasion in which Blomfield posed as a lawyer and fabricated the documents he required to obtain his victims compliance, and of course the $30’000.00. 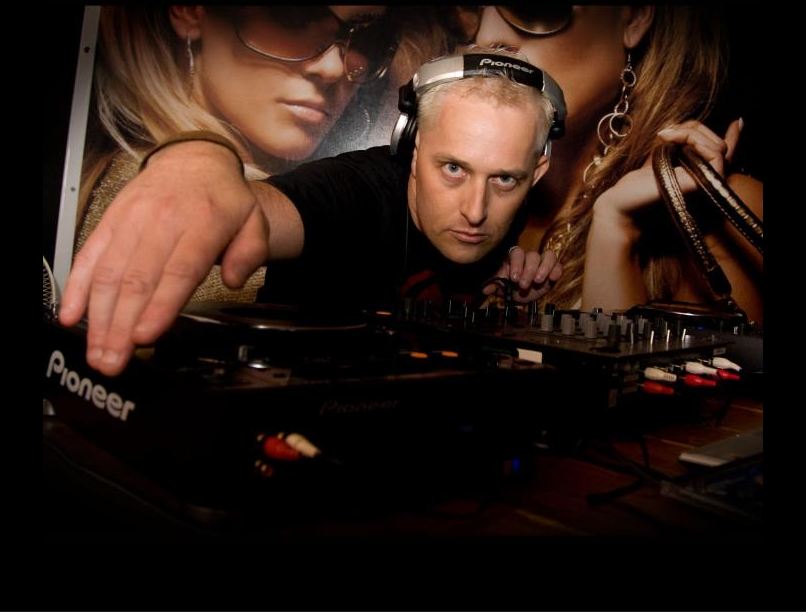 Lining up the vinyl

Clearly, Bowden, a lawyer, would have known that the offending was criminal and should have immediately been reported to police; also, that not to have done so, would have exposed other women to an unacceptable risk, with the high likelihood that this sexual offender may re-offend; in this case, in Australia where he now lives.

Regular readers will be well aware of team LF’s views on sexual offenders escaping justice, and just as importantly, those who assist with their evading capture and criminal prosecution.

That then brings us to a purported statement of claim and various emails that will soon be in the hands of a number of Australian and New Zealand authorities. 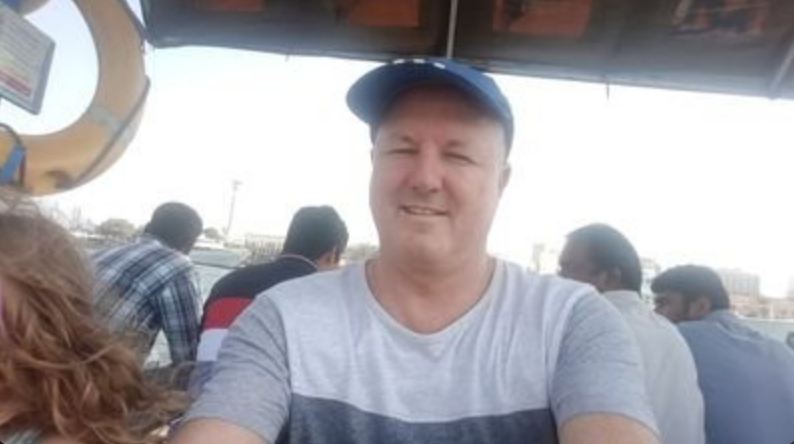 These documents had been affixed with an official court seal, which of course does not necessarily mean that a court registrar had ever actually clapped eyes on them.

The sexual offender, for example, may only ever have been shown or received a photocopy, and thus it is not beyond the realms of possibility that the document itself is a forgery, a clever “cut and paste” from another document to which the Court seal had been legitimately affixed by a Court registrar.

As aforesaid, Roger Bowden, if he was in fact even involved in preparing the purported statement of claim and it’s filing, would have known that any judge worth their salt would have questioned his failure to immediately refer this criminal offending to the Whangarei police. 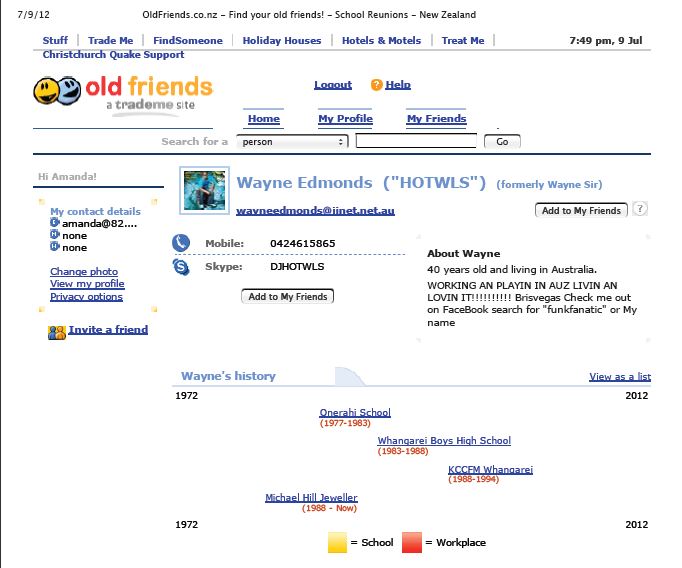 In fact with this in mind one could be forgiven for wondering whether the purported Court documents, and the affixed seal are genuine. Whether in fact Bowden was ever even involved?

The fact is that if Bowden, a lawyer, was a party to this successful blackmail, then, at least in our humble opinion, he should now be prosecuted for what is, also in our estimation, a more than obvious extortion.

So there you have it readers, Matthew Blomfield’s latest twitter fishing expedition exposed.

The twitter account @RogerBowdenI of course feigned no knowledge of the crime, during his brief twitter exchange, but we’re pretty sure that Matthew Blomfield left the exchange with a clear understanding of our knowledge and certainly our intentions.

Unfortunately for the real Roger Bowden, the real life lawyer that now lives and works in the United Arab Emerates, Sharia Law and Sharia Courts take a very dim view of such criminal antics, especially those were women have been exploited; the punishments being much more severe than what Roger could expect to have received in corrupt little old New Zealand; especially with his contacts in the local judiciary. 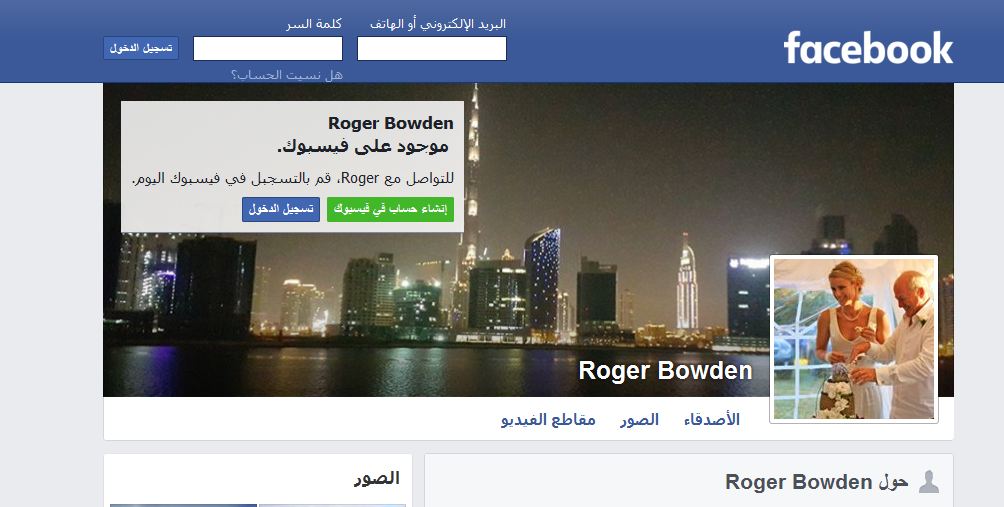 Now one really has to wonder why it is that the New Zealand police are protecting Matthew Blomfield, so many complaints have been made, all offending with a common modus operandi and yet still the victims are being led a merry dance by police…..but more about that later.

So, hands up those who, like the New Zealand Herald Journo David Fisher, still think Matthew Blomfield an “ordinary, run of the mill guy”?

Although, having said that, perhaps even David Fisher has good enough reason to now be reassessing his idiotic opinions?

Next up, the latest attempt to intimidate, posing as a lawyer and yet again using New Zealand’s Courts as a gag; and to think that Justice Raynor Asher deemed this man no threat.